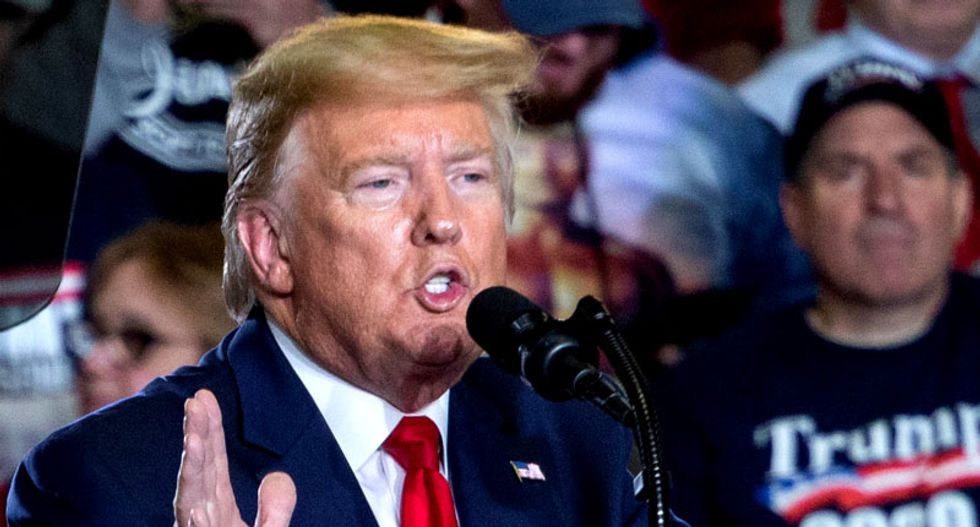 Trump's campaign launched an "unusually aggressive" push on the local level, sending 100 county election officials in North Carolina "threatening letters" and "misinformation" to urge them to disregard a new rule that makes it easier for voters to fix mistakes on their mail ballots, according to the Associated Press. The warnings came after the state Board of Elections settled a lawsuit after ballots cast by Black voters in the state were disproportionately rejected.

The campaign also sent letters to more than 1,800 municipal clerks in states like Wisconsin and Georgia that raised questions about the security of mail voting, according to CNN. The campaign also threatened to sue officials in Pennsylvania for blocking "poll watchers" from observing election offices where people register to vote and apply for mail ballots, according to the AP.

Trump's team has repeatedly filed lawsuits in response to states easing access to mail ballots amid the coronavirus pandemic but such litigation has so far been unsuccessful. Trump has suggested that he aims to fight the expansions all the way to the Supreme Court as he hopes to add Amy Coney Barrett, his third conservative justice in four years, to the high court before November. Less visible has been the campaign's quiet efforts to undermine voting rules on the local level, where his team has bombarded officials with letters that have raised alarm among election experts.

"Through threatening letters, lawsuits, viral videos and presidential misinformation, the campaign and its GOP allies are going to new lengths to contest election procedures county-by-county across battleground states," the AP reported, highlighting a "blizzard of voting-related complaints" from the campaign.

In North Carolina, a key swing state that Trump carried by just three points in 2016, Black voters have had their mail ballots rejected at four times the rate of white voters. It's even worse in certain areas. Guilford County, which includes Greensboro, has a rejection rate six times higher than the rest of the state. Officials say ballots there are currently "in limbo" as they await further guidance.

Last week, a judge approved a settlement between the state's Board of Elections and voting rights groups allowing voters to fix missing signatures or addresses on their ballots without filling out a new ballot. The Trump campaign told local officials simply to ignore the new rule.

"The NC Republican Party advises you to not follow the procedures," Trump campaign operative Heather Ford told officials last week in an email obtained by the AP.

"It's clearly based on an overall strategy to disrupt the election as much as possible," attorney Barry Richard, who represented George W. Bush's campaign in the 2000 Florida recount, told the AP. "You're really seeing a broad-based, generalized strategy to suppress the vote by the Republican Party."

S.V. Dáte, HuffPost's White House correspondent, argued that the effort showed the campaign was "openly trying to cheat in the coming election."

Trump's campaign argued that it was simply trying to "ensure a fair election" — apparently by encouraging local officials to ignore a court-approved settlement.

"Since when is fairness a bad thing?" campaign spokesperson Thea McDonald said in a statement to the AP. "County board members need guidance on how to proceed in the wake of these unelected Democrats' attempt to radically rewrite the law 40 days out from Election Day."

But North Carolina Attorney General Josh Stein, a Democrat, included the campaign's email to officials in court documents to show that the "party was improperly undermining an official state directive," according to the report.

Two Republican members of the Board of Elections have quit in protest against the new rule and the panel's Democratic majority has since told counties to hold off on allowing voters to fix their ballot errors, pending further court battles.

"What we're talking about is an effort to deliberately place these barriers in front of people. And many may be discouraged from trying to cure, or making it impossible for them to cure, a deficiency," Irving Joyner, a law professor at North Carolina Central University, told the AP.

Pennsylvania, another key swing state that Trump narrowly carried in 2016, has also become a focal point in the Republican effort to torpedo new rules making it easier to vote by mail.

The campaign has sued the city of Philadelphia in order to gain access for Republican "poll watchers" to election offices, which are not polling places. The state's Republican leaders are also fighting a state Supreme Court decision that allowed mail ballots to be counted up to three days after the election as long as they are postmarked by Election Day and blocked "poll watchers" from monitoring polling places in areas where they do not reside.

Republicans have long planned to deploy an "army" of some 50,000 poll watchers nationwide for the election, which critics argue would amount to voter intimidation.

Republicans have also asked the U.S. Supreme Court to overrule a lower court ruling that blocked a South Carolina witness signature requirement for mail ballots, due to the risk of COVID infection from person-to-person contact.

These efforts have not been limited to ballot issues. The Wisconsin Republican Party recently warned the city of Madison against holding a "Democracy in the Park" event, arguing that it could be used for the illegal collection of ballots. City officials ignored the cease and desist letter but a day later Republicans warned the city of Milwaukee that it would be illegal for its sports teams to have mascots present while their venues are used as makeshift polling places, arguing that would violate laws against "electioneering" at voting locations.

"It would be ludicrous to think that that was electioneering," Claire Woodall-Vogg, executive director of the city Election Commission, told the Milwaukee Journal-Sentinel.

Although most of the Trump campaign's efforts have been petty and ineffective, election experts say they offer an insight into a coordinated behind-the-scenes efforts to "work the refs."

"All of this conduct is so beyond the pale," Rick Hasen, a law professor at the University of California, Irvine, told the AP. "It's hard to put in context because there's been nothing like it in modern American campaigns."