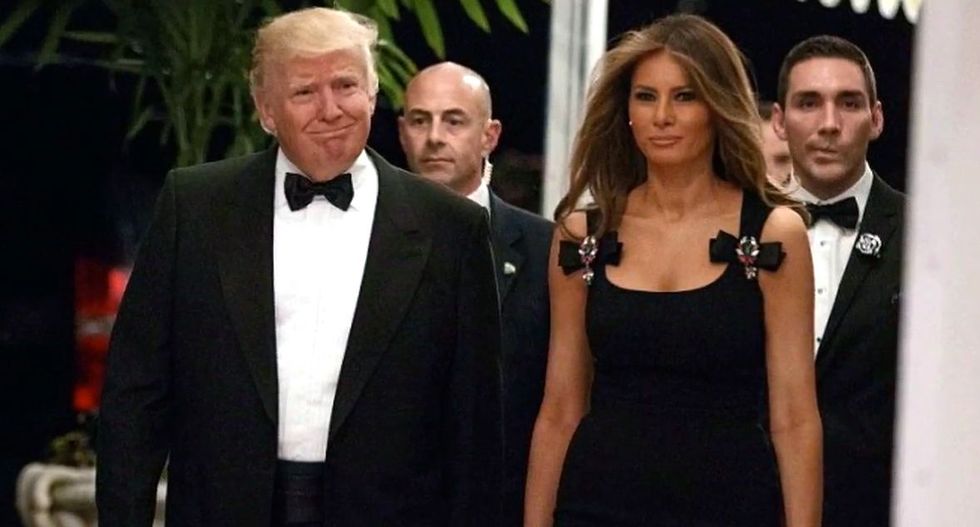 Donald Trump and Melania Trump at Mar-a-Lago (Photo: Screen capture)
President Donald Trump did not deny a New York Times report that he owes $421 million at a Thursday town hall event. Instead, he insisted that the amount was "tiny" in comparison to his overall wealth.

The Times revealed that Trump has to pay back $421 million in the coming years in a bombshell exposé detailing his personal and business tax returns. The documents obtained by the outlet showed that Trump had paid $0 in federal income taxes for a decade before paying $750 in 2016 and 2017. Moreover, they showed that the president had reported losing hundreds of millions of dollars on the properties he operates.

Though Trump previously called the report "fake news," he did not deny that he owed more than $400 million at Thursday's NBC News town hall. Rather, he falsely insisted that the outlet had illegally obtained his tax information. The president declined to say to whom he owes money.

"I have a very, very small percentage of debt compared" to my wealth, Trump claimed.

The president alleged that he took on the debt as "favors to institutions that wanted to loan me money."

"It sounds like you're saying $400 million isn't that much," moderator Savannah Guthrie responded. "But are you confirming that, yes, you do owe some $400 million?"

"What I'm saying is that it's a tiny percentage of my net worth," Trump replied. ". . . I don't owe Russia money. I owe a very, very small . . . It's called mortgages. People have a house, they put a mortgage."

"I don't owe money to any of these sinister people," he continued. "This has been going on for years now."

Asked if he owed money to any foreign entity, Trump replied: "Not that I know of."

"I will probably . . . I will let you know who I owe whatever small amount of money," he added.

In fact, Trump's company reportedly owes about $340 million to German financial giant Deutsche Bank, the embattled institution which was one of the few banks willing to lend him money after a series of bankruptcies and defaults. While Trump appeared to acknowledge the $421 million in personally guaranteed loans that were reported by The Times, a Forbes analysis found that Trump's total debt was actually closer to $1 billion.

Trump has earned more than $200 million in income from his interests in foreign countries since 2016, according to an analysis by the Center for Responsive Politics.

Guthrie told Trump that he could "clear this up tonight" by releasing his tax returns.

Trump then invoked his dubious claim that he cannot release the returns "under audit."

"No person in their right mind would release prior to working out the deal with the IRS," Trump said. "And, I'll go a step further — I'm treated very badly by the IRS. They treat me very, very badly."

"Just to be clear, there is no law or rule that prohibits you from releasing your tax returns," Guthrie pointed out.

"No, except common sense and intelligence — and having lawyers," Trump responded. "Because I would love to release them."

Guthrie pressed Trump on whether he had paid only $750 in federal income taxes.

"Is that on the page?" Guthrie questioned. "Then most people here probably pay for it."

"I don't know. I can tell you this: If they have my tax returns, as you know, they have to go to jail. It's illegal," the president claimed before changing the subject back to his debt. "But their numbers were wrong . . ."

Trump claimed that what he owed was not a "big deal," but former intelligence officials worry that his outstanding debts may pose a national security threat.

"For a person with access to U.S. classified information to be in massive financial debt is a counterintelligence risk, because the debt-holder tends to have leverage over the person, and the leverage may be used to encourage actions, such as disclosure of information or influencing policy, that compromise U.S. national security," David Kris, the former head of the Justice Department's National Security Division, told Time.

Robert Cardillo, the former deputy director of the Defense Intelligence Agency, added that "a second term for President Trump would result in increased vulnerability — and thus, potentially, risk."