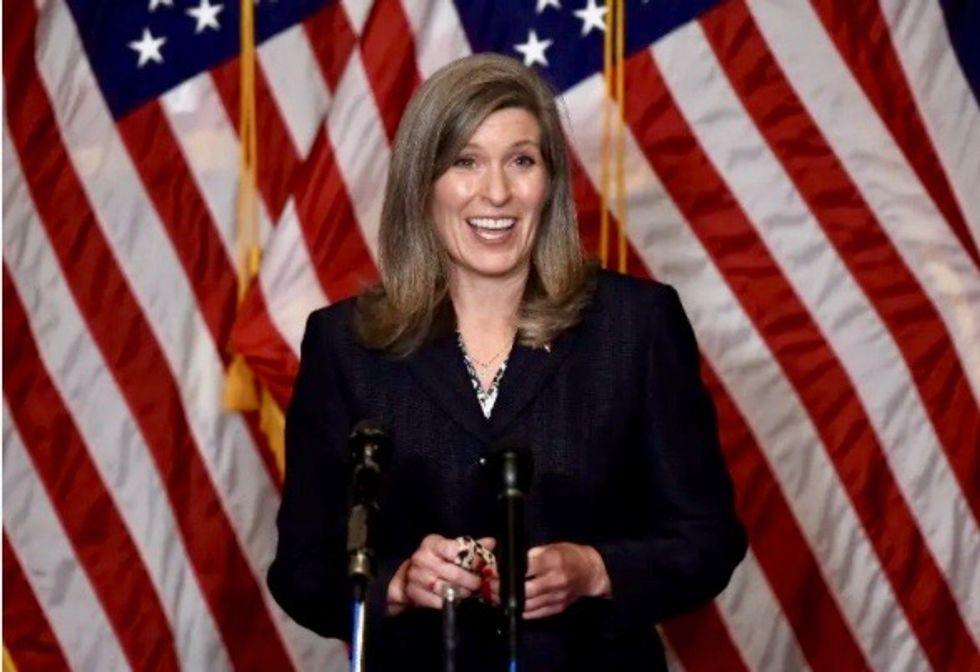 Republican US Senator Joni Ernst won her reelection bid in Iowa, frustrating Democrats who had targeted her seat as they sought to flip control of the chamber (AFP)

Despite retaining the House of Representatives, the path for Democrats to flip control of the US Senate narrowed sharply early Wednesday after two key Republicans facing tough reelection battles claimed victory.

But the blue wave that many Democrats predicted may have crested there, potentially falling short of the three to four seat gains they needed to take control of Congress's upper chamber.

Republicans ousted a vulnerable Democrat in Alabama, and the GOP stood their ground in other key races, often defying polls that warned how President Donald Trump could be a drag on GOP incumbents defending vulnerable Senate seats.

Senator Lindsey Graham -- under intense pressure after overseeing the controversial confirmation process of a Supreme Court justice weeks before the presidential vote -- fought back a fierce challenge from African-American Jaime Harrison in the conservative bastion of South Carolina.

"We didn't get the result at the ballot box that we wanted, but we showed courage and determination," Harrison, an African American candidate who had raised record amounts of campaign funding, said in a statement.

"We did it!" a relieved Ernst said on Twitter.

Another hotly contested seat was tilting the Republicans' way in North Carolina, where networks had yet to call the race but Senator Thom Tillis claimed a crucial win, with some 94 percent of the vote counted.

"What we accomplished tonight was a stunning victory -- and we did it against all the odds, right?" Tillis told boisterous supporters, adding that he was doing his part "to save the Senate."

Joe Biden's Democrats would need to gain four seats to seize the chamber -- or three seats if Biden wins the White House, as a vice president breaks a tie in the Senate in the event of a 50-50 vote.

Democrats are now eyeing Maine and Georgia as potential flips.

If Democrats can win one of these seats, control of the chamber could hang in the balance until a runoff in Georgia's other special election Senate race is held on January 5, 2021.

Controlling the Senate is vital as the party in power determines which bills reach the floor and which of the president's nominees receive confirmation votes.

Democrats meanwhile kept the House of Representatives, with Speaker Nancy Pelosi -- Trump's chief nemesis in Washington -- likely to preside over her flock for two more years, but it remained unclear whether Democrats could increase their majority.

Popular New York progressive Alexandria Ocasio-Cortez comfortably secured a second term, as did the three other members of "The Squad," a liberal quartet that has occasionally faced intense criticism from Trump and his allies.

"I'm very, very proud of the fact that tonight -- relatively early -- we are able to say we have held the House," Pelosi said.