'He wanted this civil war': Voters warned Trumpism will remain a 'killer virus' regardless of who wins 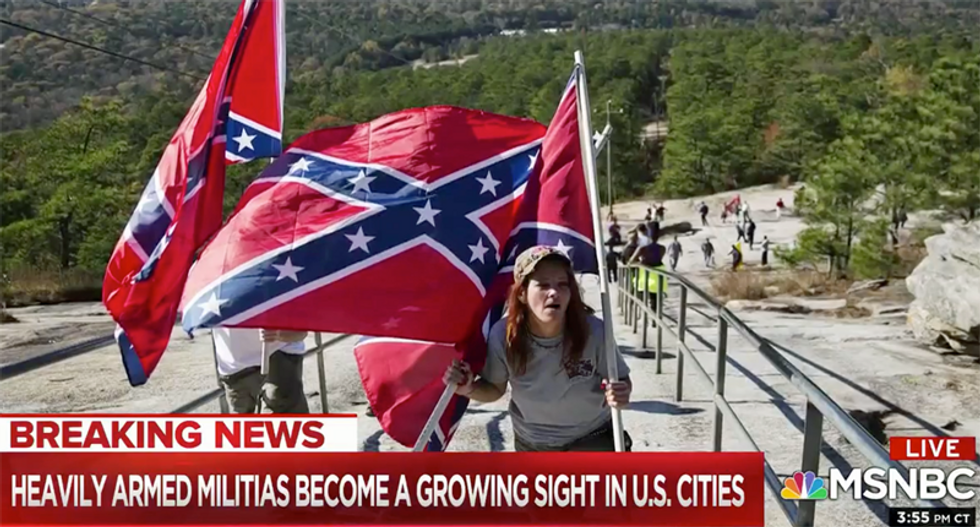 "In his last super-spreading rallies of the 2020 campaign, Donald Trump denounced Lady GaGa, derided Jon Bon Jovi, and decried LeBron James. At one outing, he beamed when the crowd chanted, “Fire Fauci!” He told the crowd he just might do that after the election. At another event, he voiced his support for Texas Trump supporters who had threatened a Biden campaign bus. Anger. Violence. Hatred. Ignorance. It was an appropriate synthesis of the core message of the 45th president of the United States," Corn wrote. "In this final stretch, the health and safety of Americans and the well-being of the entire country did not concern him. Instead, the former reality-TV celebrity was focused on the political cultural war he has been inflaming and relying on for over five years, for that was what Trump has always been about: fear and loathing."

"So even though on the morning after Election Night it appeared that former Vice President Joe Biden might squeak by with a narrow victory in the Electoral College (as Democrats failed to win the Senate), one tragic message stood clear: Trump’s politics of hate, which succeeded in 2016, remain a powerful force. Four years ago, Trump won 63 million votes (trailing Hillary Clinton by 3 million). In 2020, he has so far pocketed 66 million (2.5 million behind Biden). So after a full term of Trump fully displaying immense ineptitude and unabashed malice, he gained support among Americans. That shows the deep hole the nation has fallen into—whoever prevails in the final count and coming legal challenges," Corn warned.

Trump's supporters will remain even if he leaves office.

"Trump’s lethal incompetence caused tens of thousands of deaths, and millions of Americans did not care about that. They still rallied to their man. They attended or watched campaign events where Trump placed his own supporters (and others) at risk. Following the lead of their dear leader, they disregarded the science, dismissing the concerns and statements of public health experts. They denied reality; they defied rationality. They placed their trust in Trump above all else. As numerous commentators have noted, they acted like members of a cult," he explained. "These people believed Trump and all his lies. That the US economy on his watch was the greatest ever. That he was the victim of a Deep State plot."

"This election was not about which presidential candidate had a better health care plan or a more equitable tax proposal. Not about the all-important issues of climate change, education, housing. It was a civil war, with Trump leading Red State America in a crusade against the rest of the nation. This was largely how he won four years ago (with an assist from Moscow). In his four years as president, Trump did all he could to sharpen the divisions to prepare for his reelection bout. He took few steps to reach non-Trump America. During the pandemic, he refused to evince empathy or to use the ongoing tragedy to call Americans together. He politicized an emergency and undermined the basic steps that had to be taken to slow the spread. He wanted this civil war," Corn warned. "When the votes are all counted—when recounts and legal challenges are finished—this election will not resolve the bitter conflict that has consumed the United States. The soul of the nation will not be won or healed. Trump may have to leave the White House. But the tens of millions of voters who fervently endorsed his blend of incompetence, rage, authoritarianism, and racism are not going anywhere."

JUST POSTED: Trump may lose, but Trumpism is here to stay. Nearly half of voters endorsed a racist bully whose inep… https://t.co/21QrkjAyTF
— David Corn (@David Corn) 1604509221.0