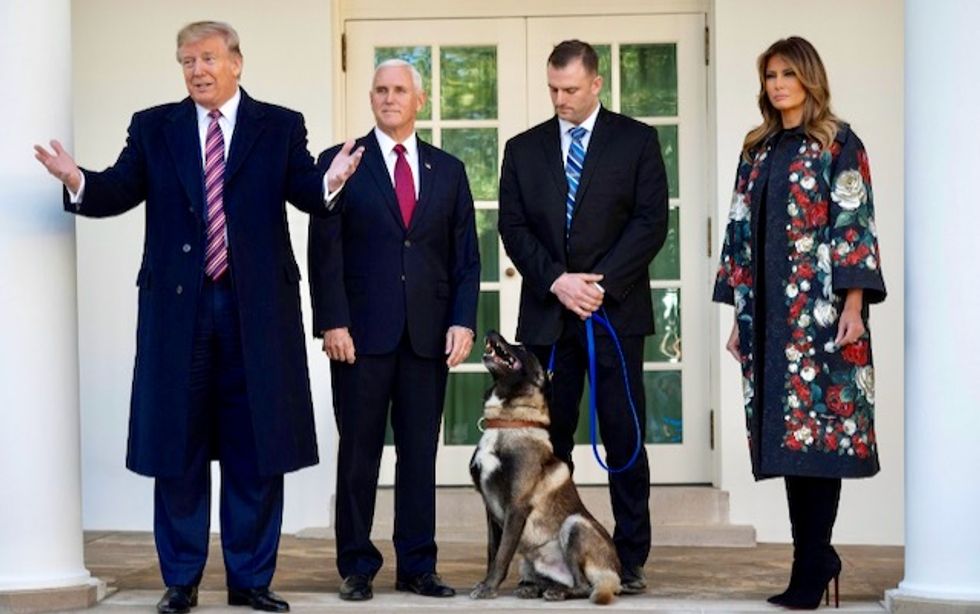 President-elect Joe Biden played with his dog Major so hard he ultimately slipped and twisted his ankle. But instead of mocking Biden, many turned to mock President Donald Trump, who, allegedly, hates dogs and most animals.

Trump's ex-wife Ivana told a story about the president's hatred of animals in her book Raising Trump.

"Donald was not a dog fan," ex-wife Ivana confirmed in the memoir, recalling her poodle Chappy, who would "bark at him territorially."

Trump also uses "dog" as a pejorative to attack others. After ordering a raid that ended in the death of Abu Bakr al-Baghdadi, Trump said he "died like a dog." He once mocked Sen. Marco Rubio for "sweating like a dog" during a 2016 debate and compared former White House adviser Omarosa Manigault Newman to a dog after she published her tell-all book about her time in the administration. Trump also attacked former Republican presidential nominee Mitt Romney, saying he "choked like a dog" in the race against former President Barack Obama in the 2012 election.

See the mockery of Trump below:

@JennaEllisEsq Trump's girdle and diapers would restrict any playing with dogs.
— Caralehn (@Caralehn)1606686219.0

Trump: inexplicably uses “like a dog” as a insult Biden: plays so hard with his rescue dog that he hurts himself… https://t.co/xMPCIlOZbU
— Caryn Lenhoff (@Caryn Lenhoff)1606686205.0

@NBCNews Don't let anything bad happen to our new president for God's sake! That would be the answer to Trump's prayers because he's a dog.
— DEBORAH COMBS (@DEBORAH COMBS)1606686198.0

I think trump was the only president that did not have a pet. Not even a gold fish. The better people like animals.… https://t.co/nrR0YONMZm
— Elizabeth Malich (@Elizabeth Malich)1606686192.0

@BillKristol Trump’s not a dog person... That should tell you everything you need to know about him😏
— CrotchetyButFair (@CrotchetyButFair)1606686076.0

@JennaEllisEsq This would never happen because Trump isn’t a kind enough person to play with a dog. He actually hates dogs.
— carolyn covey (@carolyn covey)1606685994.0

White House Press Secretary Jen Psaki appeared to be prepared on Tuesday after Fox News correspondent Kristin Fisher used her time at the briefing to ask about Dr. Seuss.

Throughout the day on Tuesday, Fox News aired segments to express outrage at a decision by Dr. Seuss Enterprises to cease the publication of six books that have insensitive or racist content.

During his testimony at a Senate Judiciary Committee hearing this Tuesday on the riot at the U.S. Capitol this past Jan. 6, FBI Director Christopher Wray took questions from Sen. Josh Hawley (R-MO), who called into question the FBI's method of investigating those who participated in the riot, suggesting that the analysis of cellphone metadata may be unlawful.

Markle, who is formally known as the Duchess of Sussex and is married to Queen Elizabeth II's grandson Prince Harry, won a comprehensive victory in February against Associated Newspapers after extracts of the 2018 letter were published in 2019.