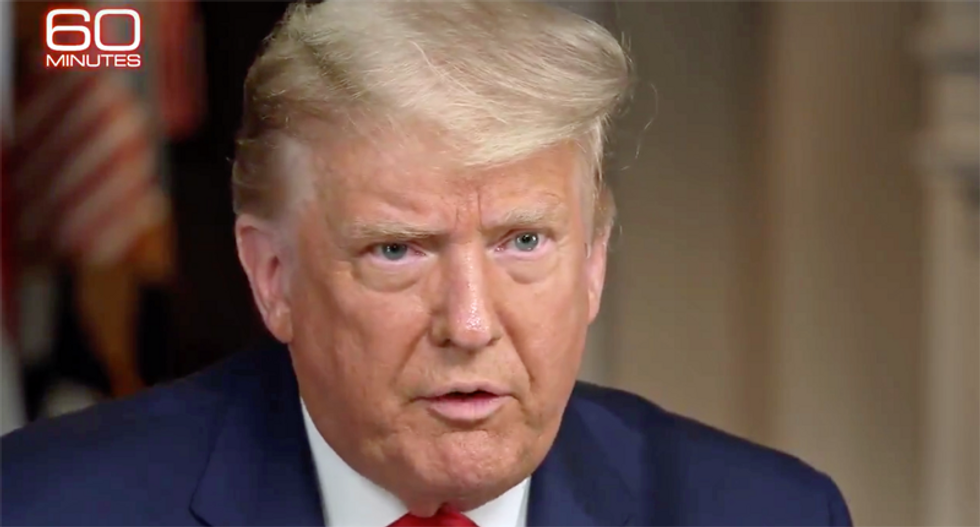 Political activists, artists, journalists, and others united Wednesday evening in taunting President Donald Trump on Twitter after he falsely claimed victory in four of the five remaining battleground states.

Since Election Day, the president has told lie after lie after lie and more lies again, culminating Wednesday with an inexplicably imperious claim to have won Pennsylvania, North Carolina, Georgia, and Michigan—without having actually won any of them. Trump tweeted that:

As has become a habit for Trump, his latest bogus claim was flagged by Twitter for violating the platform's prohibition on "manipulating or interfering with elections" by disseminating "false or misleading information."

Amid the highly charged atmosphere of a cliffhanging election, the moment was ripe for some comic relief, which was provided by one public figure after another tweeting fanciful claims to rival Trump's purported landslide.

The political advocacy group MoveOn set the mocking tone early in the afternoon:

Around the same time, R&B superstar John Legend asked, what if people "all claim things we don't have any right to," and from there it was off to the races.

All kidding aside, Trump and his Democratic opponent Joe Biden remained locked in an excruciatingly tight race that as of Wednesday evening came down to votes that were still being tallied in Alaska, Arizona, Georgia, Nevada, North Carolina, and Pennsylvania.

As of time of publication, Biden enjoyed a 253 to 214 Electoral College advantage, needing only a combination of Arizona and Nevada, or either of those states plus Georgia, or Pennsylvania alone, to propel him past the 270-vote threshold for victory. Trump, on the other hand, would have to win several of the remaining states in order to secure a second term.