Trump still has a chance — and he owes it to 'a broken society with a broken political system': Columnist 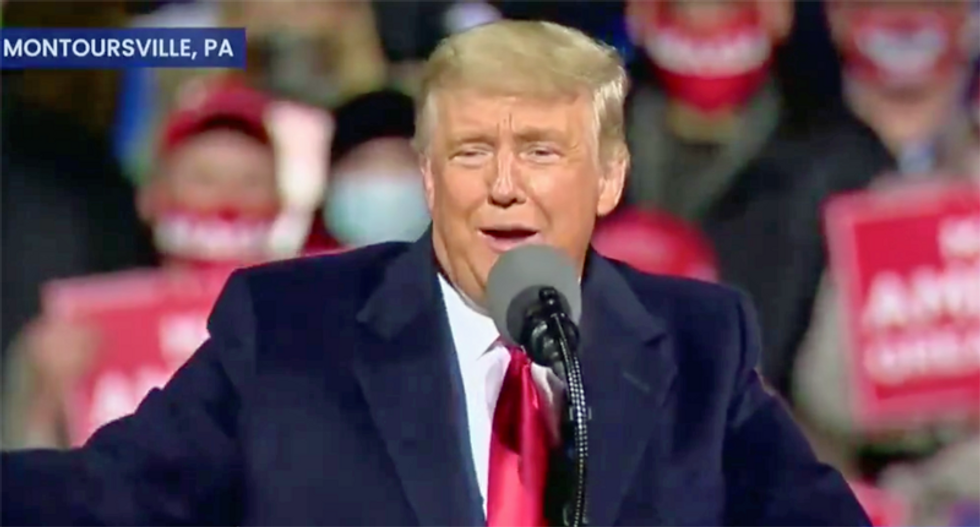 On Tuesday, writing for Slate, correspondent Jordan Weissman laid out how the fact that President Donald Trump still has a chance to win re-election this week — in spite of every national scandal and in spite of polls showing a decisive lead for Joe Biden — is indicative of how "insane" U.S. political culture has become, and how broken the democratic system is.

"It is insane ... that he even has a shot of pulling this race out," wrote Weissman. "Nobody, least of all Trump, believes that he will win the popular vote. It is not even a discussion at this point. But we’re all trapped in a mad house erected upon the electoral college, an anti-majoritarian barbarism that, according to conventional wisdom, now requires Democrats to win by at least 3 percent to have a shot at the White House, and drives otherwise sensible Americans to spend sleepless nights and precious emotional energy freaking out over early voting patterns in Miami-Dade."

"Other countries — the ones we like to think of as our peers, even if they see us more like a tragic, strung-out uncle these days — don’t do this to themselves," wrote Weissman. "In normal, advanced presidential democracies, the candidate who gets the most votes actually wins. We’re the only one where the person who comes in second can still somehow end up in charge. There is no good argument for it, in this year of our collective misery, 2020. It is nuts."

Moreover, wrote Weissman, the mere fact that a not-insignificant segment of voters is still vocally supportive of the president is astonishing.

"We are literally living through one of the worst-case scenarios experts anticipated when he was first elected: A pandemic that has killed 231,000 Americans, thanks in no small part to the White House’s botched response, and is set to ravage the country for months more, since Republican leaders seem to have mostly decided to let COVID rip and hope for the best," said Weissman. "And yet a substantial portion of the country looks upon Trump, and his record, and sees not only a successful leader, but one they love, a figure they are willing to pack into a cold airplane hanger to cheer on while unmasked, because they apparently want to own the libs and the germ theory of disease. As a polity, we are not well."

"Maybe Biden will pull off a resounding win, and even if Trump refuses to concede the world will move on, and his refusal to promise a peaceful transition of power will just be remembered as one more inexplicably petulant provocation by a president who refused to make even token gestures toward normalcy," concluded Weissman. "But the mere fact that we have to worry about the arraigned forces of minority rule returning a president this unfit and unpopular back to the Oval Office, or that his successor won’t be able to actually run the country, should make us deeply fearful for the future."