What's the plan if Trump tries to steal the election? Here's the plan 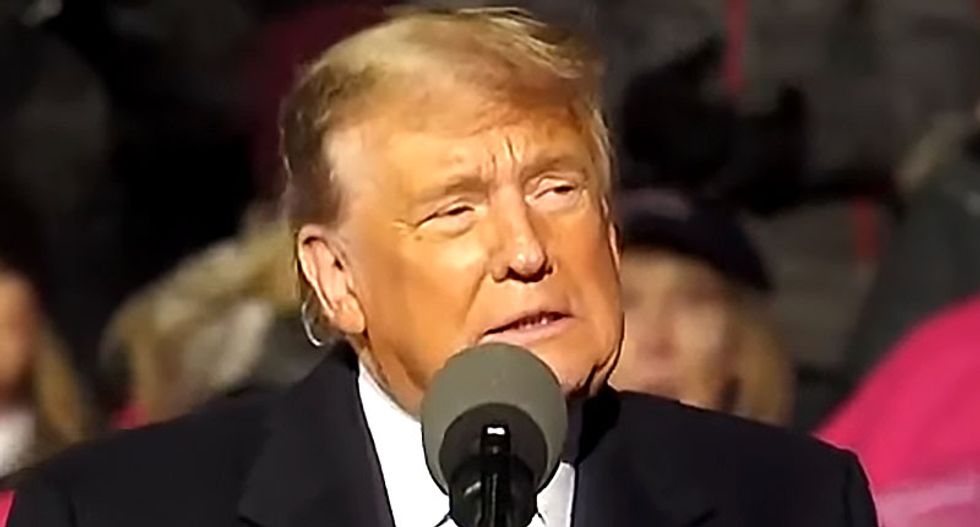 Prompted by President Donald Trump's open, repeated, and lie-filled attacks on the legitimacy of Tuesday's election and persistent refusal to commit to a peaceful transition, the question of what America's authoritarian incumbent will do as results begin trickling in on Election Night has for months been a topic of grave concern and speculation.

"If Trump loses, he must accept those results. Our democracy depends on it."

If the president has an early lead among in-person votes, will he attempt to falsely declare victory and dismiss as fraudulent any ballots counted after Election Day?

If Democratic presidential candidate Joe Biden wins, will Trump refuse to accept the results and turn to the conservative-dominated U.S. Supreme Court to help him steal the election?

Those potential nightmare scenarios have spawned an additional key question: What are advocacy groups, media outlets, social media platforms, state election officials, and the national Democratic Party preparing to do in response?

Here's what we know so far.

The 'Protect the Results' Coalition

Officially launched in June by Stand Up America and Indivisible, the Protect the Results Coalition grew exponentially as Trump's threats to spurn the results intensified in the months leading up to Tuesday's election.

Now consisting of more than 130 national and state-level advocacy groups—including voting rights, labor, and environmental organizations—the coalition has organized more than 500 events nationwide contingent upon any effort by Trump to undermine the election results. Stand Up and Indivisible have said they hope to mobilize millions of Americans should the president refuse to accept the outcome.

"If Trump loses, he must accept those results," the coalition's website declares. "Our democracy depends on it."

Find an event near you: 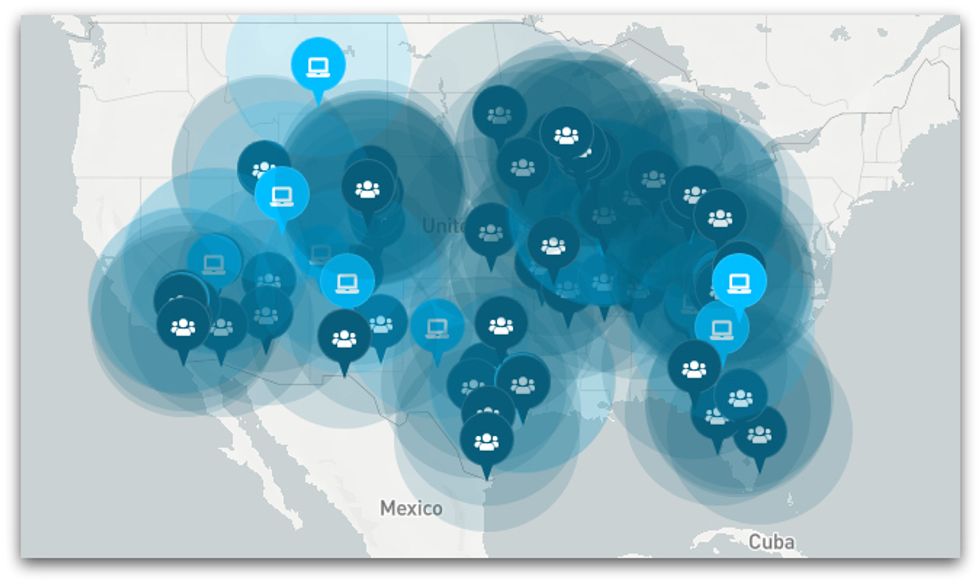 Facebook and Twitter, the two social media platforms on which Trump and his campaign are most active, have both vowed to add labels to posts and tweets by political candidates attempting to claim victory before the results have been officially called by states or prominent news organizations.

"To determine the results of an election in the US, we require either an announcement from state election officials, or a public projection from at least two authoritative, national news outlets that make independent election calls."

"If any candidate or campaign tries to declare victory before the final results are in, we'll add a label to their posts directing people to the official results from Reuters and the National Election Pool," Facebook announced in September.

"People on Twitter, including candidates for office, may not claim an election win before it is authoritatively called," the company said in a blog post. "To determine the results of an election in the US, we require either an announcement from state election officials, or a public projection from at least two authoritative, national news outlets that make independent election calls. Tweets which include premature claims will be labeled and direct people to our official U.S. election page."

Election officials in key battleground states have for weeks been working to counter Trump's attacks on expansions of mail-in ballot access amid the coronavirus pandemic.

With Trump continuing to falsely insist that counting ballots after Election Day—a completely normal and legal practice—is an indication of fraud, state officials have been making the media rounds to debunk the president's lies and ensure the public that they are doing everything in their power to prevent Trump and his Republican allies from invalidating legally submitted absentee ballots.

"I could care less what Donald Trump says, we will count these ballots."

"There's a whole cottage industry devoted to all kinds of hypotheticals about how the election could go wrong," Michigan Attorney General Dana Nessel, a Democrat, said on a Monday call organized by the Voter Protection Program. "Here in Michigan, we know how to administer elections, we know how to count votes, and we know how to resolve election disputes... We are not about to allow anyone to steal this election."

Josh Shapiro, Democratic attorney general of the crucial swing state of Pennsylvania, said in an appearance on CNN Monday that "it's not the president that picks the president, it's the people that pick the president."

"So Donald Trump can get out there and say whatever the hell he wants on election night, but the only thing that matters is when we've counted all the legal, eligible votes here in Pennsylvania and the other states, and what the people have said," said Shapiro. "I could care less what Donald Trump says, we will count these ballots."

In an interview with HuffPost on the eve of Election Day, House Speaker Nancy Pelosi (D-Calif.) insisted the national Democratic Party is well-prepared for any Trump effort to steal the election.

"We have our lawyers poised to move on a dime on Election Day or evening, as we see a problem."

"We're ready for it all," Pelosi told HuffPost in a Friday interview. "I would just like him to know it ain't going to happen for him at the end of the day."

HuffPost noted that for months Pelosi has "been working closely with a team of lawyers, constitutional experts, and institutions to game out responses to Trump's potential chaos before, during, and after the election. That team includes attorneys with the Democratic Congressional Campaign Committee, Republicans, and former U.S. Attorney General Eric Holder."

The House Speaker said she and her team have "been prepared for the worst for a long time because what we have seen is the worst on the part of this president in terms of his disrespect for the Constitution, his disregard of free will of the people, and his stooping to any level for his own reelection."

"We have tremendous intellectual, political and financial resources at our disposal," Pelosi said. "We have our lawyers poised to move on a dime on Election Day or evening, as we see a problem."

With Trump reportedly planning to deliver a speech on Election Night declaring victory if he takes an early lead, media outlets are facing pressure to take a more cautious approach to covering the president's remarks to avoid giving him a megaphone to spread potentially dangerous misinformation.

"If Trump goes on for more than a minute or two with falsehoods, cut away from the live feed and have your reporters explain that elections are not 'called' by their contestants."

"If Trump goes on for more than a minute or two with falsehoods, cut away from the live feed and have your reporters explain that elections are not 'called' by their contestants," advised Vivian Schiller, the former president and CEO of National Public Radio. "Explain why such a premature declaration of victory is both wrong and dangerous."

CNN's Brian Stelter reported Monday that "though network executives are reluctant to talk publicly about such a hypothetical and disturbing scenario, five people at various networks said on condition of anonymity that they fully expect the president's Election Night remarks to be shown live virtually wall to wall."

"However, any premature claims by the president—or by Joe Biden, for that matter, though there is no equivalent fear of that happening—will be wrapped in televised context, with vigorous corrections and visual proof that the race is too close to call. One plan publicly described by NBC News president Noah Oppenheim has been echoed by leaders at other networks, including CNN."

Washington Post columnist Greg Sargent on Monday urged reporters to "convey clearly how many votes, and what percentages of votes, remain to be counted" when combating potential Trump lies.

"Separately, [New York University professor] Jay Rosen has urged a break with the "what a president says is news reflex," to avoid amplifying Trump's insistence that outstanding ballots are illegitimate," Sargent continued. "And [Washington Post media columnist] Margaret Sullivan suggests reporters embrace the mission of explaining the uncertainty surrounding the count. Other ideas include emphasizing that the election calendar already requires states to wait weeks before certifying a winner."

In an Election Day column, The Week's Ryan Cooper pointed to Trump and the Republican Party's nationwide legal effort to invalidate absentee ballots, sabotage of the U.S. Postal Service, and celebration of the dangerous behavior of his supporters as evidence that the president is "not behaving like someone who expects to win fairly."

"In short, Trump is trying to steal the election, more blatantly than any previous president, and providing a clear preview of how Republicans would move to further erode democracy if given another four years in power," wrote Cooper. "It's an unusually clear and stark choice this election: a continuation of America's republican institutions, or its probable replacement with a tyranny."