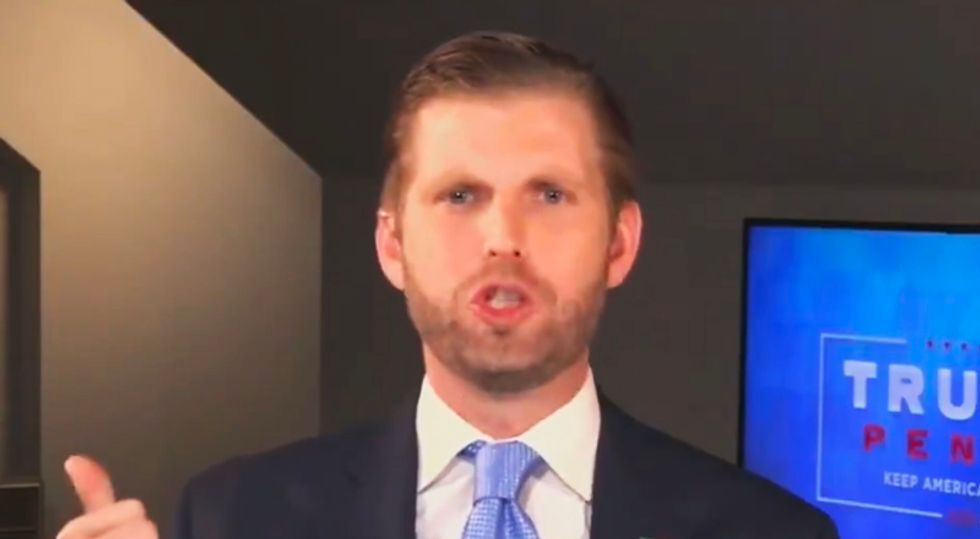 Eric Trump faced backlash on Twitter this week after he claimed that the size of President Donald Trump's rallies is proof that the 2020 election was "rigged."

"Biden couldn’t get 10 people to a rally & went days without leaving his house," Trump falsely wrote on Monday. "@realDonaldTrump received 11 million more votes than 2016, nearly doubled African American support - this was every stop, multiple times a day. This election was rigged from the beginning."

At the time of publication, Twitter had not flagged the tweet for spreading misinformation about the election.

"Or, Biden supporters understood there was a pandemic going on," one person wrote.

"It's because one half of the country recognizes they're living through a mass death event and the other thinks it's fake," another person agreed.

"78,765,000 of us are smart enough not to stand in a crowd during a pandemic to here [SIC] a candidate speak," a third commenter said.

@EricTrump @realDonaldTrump It's because one half of the country recognizes they're living through a mass death eve… https://t.co/0fSNYFsOZw
— NYT Coup Needle (@NYT Coup Needle) 1605535903.0