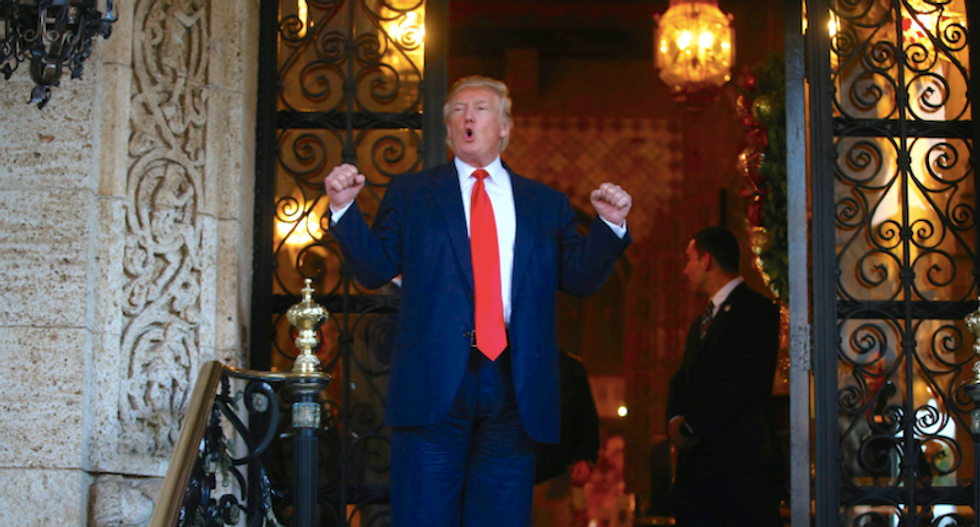 In interviews with Town & Country, Palm Beach locals expressed dismay that Donald Trump will soon be setting up housekeeping permanently at this Mar-a-Lago resort instead of returning to his native New York now that he lost his re-election bid.

In 2019, the president and his wife changed their residency to Florida -- which also happens to have lower state taxes than New York -- with the New York Times reporting, "Each of the Trumps filed a ‘declaration of domicile’ saying that the Mar-a-Lago Club, Mr. Trump’s resort in Palm Beach, will be their permanent residence.”

Reports that the Trump's may make the move before the holidays, with some associates saying the president may leave and not return after the first of the year because he fears "looking like a loser," led Town & Country to ask around in Palm Beach to get a feel for what residents think about the idea of having an ex-president in residence and not just for extended visits.

As one local businesswoman put it, "I can’t imagine anything worse.”

With the report stating that opinions vary on the president, more than a few claimed that Trump has never tried to make himself a part of the Palm Beach community even before he became president.

According to one resident, many of whom asked that they not be named, "Palm Beach is very divided,” with Town & Country reporting," On the one hand, Trump would bring visibility to the town as a tourist attraction, helping it in difficult economic times. On the other, many of the area’s residents would be just as happy without the hoi polloi milling about—and they say Trump was never really one of them anyway."

“Trump was here frequently before his presidency and never left his own clubs, so there isn’t really a reason to think post-presidency would be any different,” explained a local, adding the president and his extended family, "always chose to be very secluded within Mar-a-Lago.”

"He has never patronized any shops or restaurants, either before or during his presidency. I highly doubt that will change.," another resident offered. "Honestly, in all the years that he’s lived here, whether part-time or permanently, he has never attempted to become a contributing member of the community.”

According to Leta Foster, a local interior designer who claimed she couldn't "imagine anything worse," she said there is some cynicism that the president -- who is still contesting the election results --would even leave Washington D.C.

" I can’t remember who told me this, but someone asked a policeman in town, ‘Are you still going to be closing the area when Trump leaves office?’” she recalled. “And the policeman responded, ‘If he leaves office.’”

According to locals, Mar-a-Lago is not the same place it used to be on the social scene since the controversial Trump was elected in 2016.

"There was incredible attrition,” admitted Stephen Stolman who lives in Palm Beach. “Dozens of charities had to relocate their galas. Mar-a-Lago had become too radioactive.”

On Sunday, Page Six reported that Melania Trump is looking for a new school in the area for her son Barron, with the report stating, "A source tells Page Six the First Lady toured Pine Crest school, located in Fort Lauderdale, about forty minutes away from Mar-a-Lago. Tuition at the ritzy private school is $35,150 for grades nine through twelve and requires personal and business tax returns for enrollment."

That report added the tax return request could be a sticking point for the president who has been withholding information on his finances since he first announced he was running for president -- insisting that he is being audited.

You can read more from Town & Country here.

How on earth did Anderson Lee Aldrich have a gun? That's one of the biggest questions lingering in the aftermath of the shooting at Club Q on November 19. On December 6, Aldrich was formally charged on 305 separate criminal counts after a shooting left five people dead and 22 injured, all staff and customers at an establishment that has been characterized as a "sanctuary" for LGBTQ people in the largely conservative community of Colorado Springs, Colorado. Despite conservatives seizing on Aldrich's lawyers saying the defendant is nonbinary in a court filing, the Republican district attorney, Michael Allen, included 48 counts of bias-motivated crimes in the charges.

This was not Aldrich's first brush with the law, though the word "brush" really underplays what allegedly happened in June 2021. Stories have trickled out of Colorado for a couple of weeks now, but on Wednesday the Associated Press released a stunning, in-depth report that should raise the question of why Aldrich had been allowed to own guns.