'It's not a raid!' Gov. Ron DeSantis snaps at reporter for asking about search of data scientist's home 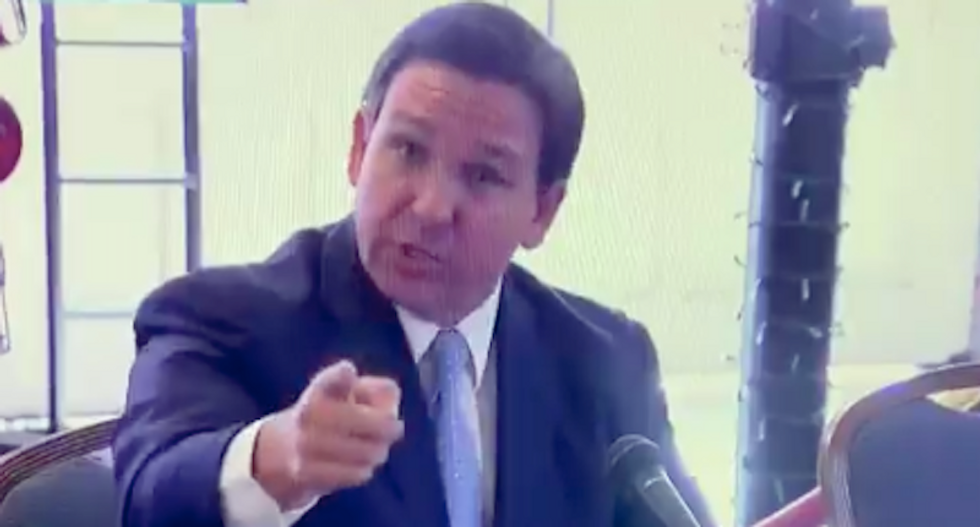 Florida Gov. Ron DeSantis snapped at a reporter who asked him about a police raid on a former data scientist who claims the state fired her for refusing to manipulate coronavirus statistics.

The Florida Department of Law Enforcement executed a search warrant Monday at the home of Rebekah Jones, who was fired by the state's Department of Health earlier this year and then claimed she was told to undercount infections and inflate the number of people tested.

"I knew there was an investigation, I didn't know what they were going [to do]," DeSantis told reporters Friday, after previously denying knowledge of the search.

"It's not a raid," DeSantis added, before growing angry at the journalist. "I mean, with all due respect, what you just said is editorializing. Sir, excuse me! Excuse me, no excuse me. I'm not going to let you get away with that. These people did their jobs, they've been smeared as the Gestapo for doing their jobs."

State police, who executed the raid with their guns drawn, seized her computer, phone and other electronic equipment during the search, in what Jones claims was an attempt to silence her ongoing work to provide public data about the pandemic in Florida.

"They did a search warrant," DeSantis said. "Why did they do a search warrant on the house? Because her IP address was linked to the felony. What were they supposed to do, just ignore the it? Of course not. They went and they followed protocol."

The Department of Health claims someone illegally hacked into their emergency alert system, and investigators say they traced the alleged hack to an IP address associated with Jones' Comcast account.

"We actually have video from the Tallahassee PD showing that they were very respectful, showing she was not cooperative," DeSantis said. "It was not a raid, they were serving valid process in accordance with the laws and Constitution of the United States and the state of Florida."

"To say it's a raid is disinformation," he added. "You guys need to look at the facts and stop trying to feed narratives. I understand why you do it, but it's not supported by facts."