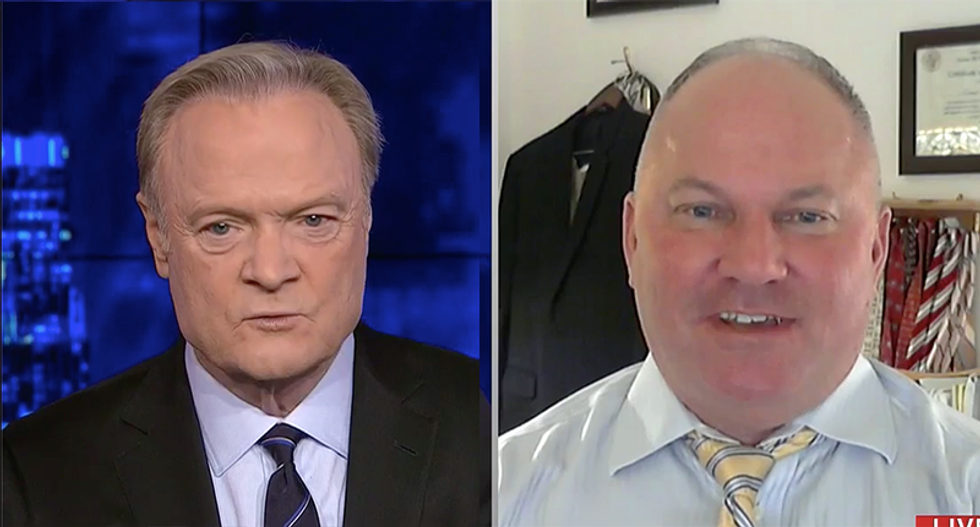 Scientist Rebekah Jones sounded the alarm early on about Gov. Ron DeSantis' hiding the truth about the COVID-19 pandemic in Florida. In a bombshell report from the South Florida Sun-Sentinel the governor was outed for suppressing bad news, spreading “dangerous misinformation,” and ignoring inconvenient facts about the virus.

Jones was then targeted by a sweeping warrant for sounding the alarm about DeSantis. She filmed the incident in which police came into her home with guns drawn and gathered all of her electronic devices, alleging she sent a text that they didn't like. In the wake of the incident, DeSantis' judicial commissioner, Ron Filipkowski, resigned in protest after studying the warrant issued by a judge appointed by DeSantis.

Speaking to Lawrence O'Donnell on Wednesday, Filipkowski explained that he saw the video and then went to look at the warrant.

"I saw the video and obviously was pretty shocked and outraged like everybody else," he said. "And then I posted something on Twitter about my visceral reaction to that. And actually, a Trump supporter sent me a link to the search warrant from the Miami Herald website and said, 'before you say anything, you better read the warrant and see what terrible things she's done.' I did that, and it just made me more mad."

O'Donnell cited the warrant saying that the attack on Jones was due to a group text message sent to workers in the Florida health department: "It's time to speak up before another 17,000 people are dead. You know this is wrong. You don't have to be part of this. Be a hero. Speak out before it's too late."

"That was the crime that was being investigated with guns drawn in Rebekah Jones' home," O'Donnell said.

Filipkowski called it outrageous, specifically calling out the overly "broad" search warrant "which encompassed them seizing all of her electronic devices, with no minimization or limits on what they could do once they received those devices, led me to believe that really their primary target of this warrant is not necessarily Rebekah Jones. And the primary purpose of the warrant is not to make a criminal case against Rebekah Jones. The primary purpose of all of this is to find out the identities of the people inside the state government who are talking to her and what they're telling her. And I think that's really what they're after."

Jones told O'Donnell Tuesday in an interview that she has confidential sources in the Florida government trying to give her information about what's going on inside DeSantis' government.

"Absolutely, there's just no -- I know that the governor's office is denying that he had any knowledge whatsoever about this investigation or this warrant," Filipkowski continued. "I mean, this is a law enforcement agency that reports directly to the governor's office. It doesn't report to a state attorney's office locally. So -- and this is a nemesis of Gov. DeSantis and has been for six months, an outspoken critic, high profile. So, the idea that his own law enforcement agency would execute a search warrant like this on such a high-profile critic and they wouldn't clear it through him or his general counsel first? That just strains all credibility to me."

See the full interview with Filipkowski below: