'Saber-toothed tiger' skeleton up for auction 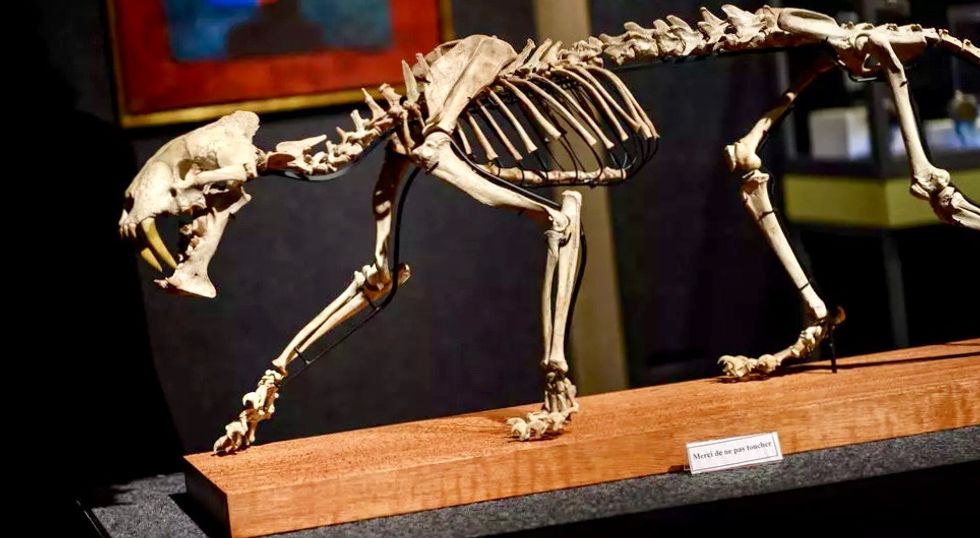 A South Dakota rancher last year discovered this rare 37-million-year-old skeleton belonging to what is popularly known as a saber-toothed tiger. It was found virtually intact and is expected to sell for tens of thousands of dollars Fabrice COFFRINI AFP

A nearly 40-million-year-old skeleton belonging to what is popularly known as a saber-toothed tiger is going under the hammer next week in Geneva a year after its discovery on a US ranch.

"This fossil is exceptional, above all for its conservation: it's 37 million years old, and it's 90 percent complete," Bernard Piguet, director of the Piguet auction house, told AFP on Tuesday.

"The few missing bones were remade with a 3D printer," he added, with the skeleton reconstructed around a black metal frame.

Piguet said he was fascinated by the merger of "the extremely old with modern technologies".

The original bones are those of a Hoplophoneus. Not strictly a true member of the cat family, they are an extinct genus of the Nimravidae family and stalked around North America.

"It was found in South Dakota during the last excavation season, towards the end of summer 2019," Swiss collector Yann Cuenin, who owns the dozens of paleontology lots on auction, told AFP.

"As in most finds, erosion had unearthed part of the skeleton. While walking around his property, the ranch owner saw bones sticking out of the ground."

While the skeleton is the star of the show, there are plenty of other treasures from the past up for grabs, including ammolite, an opal-like organic gemstone, in shades of red and orange.

Measuring 40 cm long by 36 cm wide, the fossil from the Cretaceous period is 75 million years old and hails from the Canadian Rocky Mountains. It is estimated to fetch between 20,000 and 30,000 Swiss francs.

Jurassic Park enthusiasts can also buy a Tyrannosaurus Rex tooth (2,200 to 2,800 francs), or, for 5,000 to 7,000 francs, an impressive 85-cm long fin from a mosasaur -- a marine reptile that in the Cretaceous period was at the top of the submarine food chain.