WATCH: Trump supporter flips out on cop after threatening to burn down Starbucks 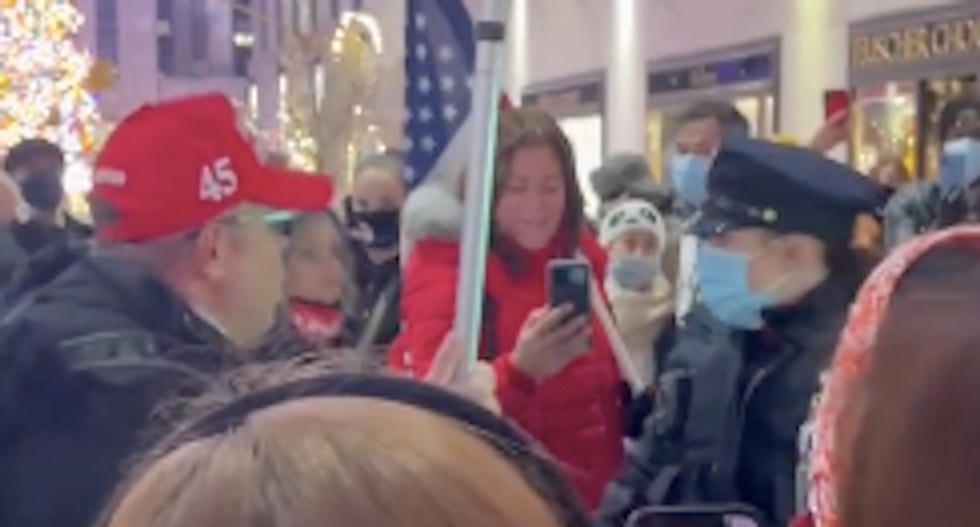 One of President Donald Trump's supporters went berserk during a demonstration in New York City.

The man, who appears to be the infamously annoying Trump fan Dion Cini, threatened to burn down a Starbucks while clashing with counter-protesters in Rockefeller Plaza, where some of the president's supporters gathered to wave signs and pester passersby.

"That's when the [Trump] group showed up and started shouting profanities, and saying how 'it's Proud Boys' turn,'" says Tik Tok user megrabah, who posted videos of the incident.

She said the Trump supporters threatened to burn down businesses, and the man in the red hat targeted a nearby Starbucks to set on fire, and then a police officer arrived and told the man to leave.

"Who the f*ck are you?" the man screams.

"I'm the f*cking police," the officer screams, even louder.

Another video shows the officer talking to a witness who says the Trump supporters instigated the clash, and the man complains the officer won't talk him.

"I tried to f*cking talk to you," she bellows, and returns to questioning witnesses.

what an eventful evening in nyc #SelfImprovement #REMDreamCheck #selenanetflix

Reply to @flowerpower8389 ask and you shall receive

How NY covered up a massacre—and helped spark mass incarceration

I come bearing the second of two parts exploring the Attica Prison uprising and its legacy today. In Blood in the Water, Heather Ann Thompson recounts the connection between New York's coverup of brutality at Attica and the rise of mass incarceration. In our episode, we try to do her arguments and the sacrifices of Attica's prisoners justice: