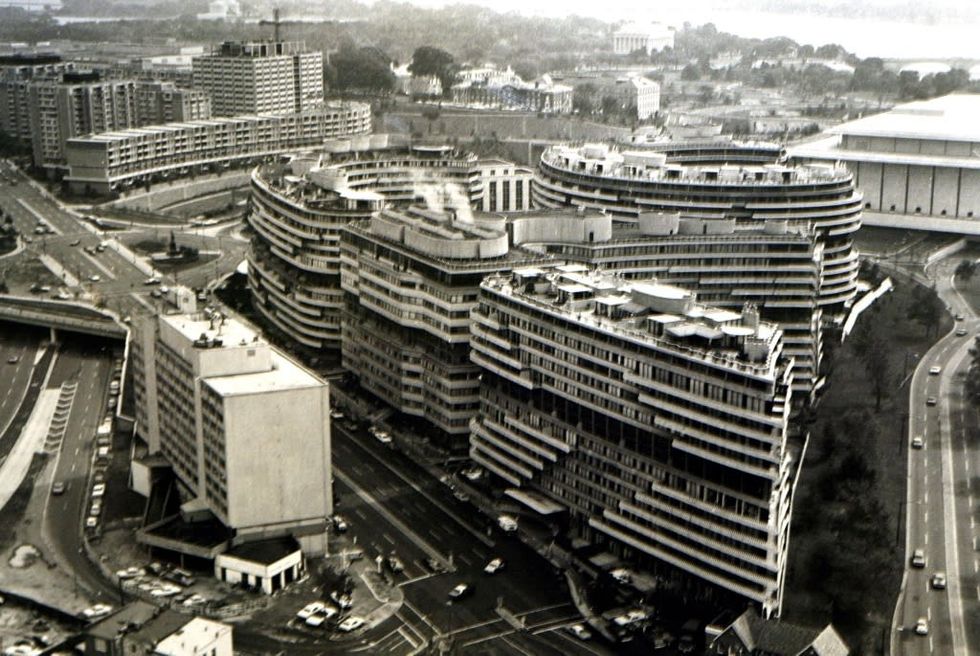 The Watergate complex in Washington, seen in a 1972 courtroom evidence photo

On June 17, 1972, Watergate erupted, one of the most spectacular political scandals in US history which led two years later to the resignation of president Richard Nixon.

Here is a timeline of how the events unfolded.

On the night of June 16 to 17, 1972, five men are arrested at the Democratic National Committee headquarters in the Watergate hotel and office complex in Washington.

The so-called "plumbers," clad in surgical gloves, are armed with photographic and recording equipment.

The next day The Washington Post slaps on its front page the break-in which took place at the height of the reelection campaign of Republican president Richard Nixon.

Two young journalists, Bob Woodward and Carl Bernstein, name James McCord, a member of Nixon's reelection committee and an ex-member of the CIA, as one of the intruders.

The reporters say the break-in was clearly linked to the White House.

On June 22, Nixon denies any involvement by his administration in the affair, which attracts little public attention.

But things don't stop there. The reporter duo goes on to establish that two men who had worked for Nixon as well as his special aide Charles Colson guided the burglars in their mission, using walkie talkies from a hotel near the Watergate.

Between October 1972 and November 1973 he meets Woodward six times in a Washington parking lot.

On October 10, 1972 the two journalists reveal a massive spying and political sabotage scandal by the White House which is seeking to get Nixon reelected.

Hundreds of thousands of dollars from donations to the Nixon campaign were siphoned off to finance a secret campaign to destabilize the Democratic camp.

Despite the controversy Nixon is triumphantly reelected on November 6 against his Democratic rival George McGovern.

On January 8, 1973 the trial of the Watergate burglars opens in the face of public indifference.

On February 7, the Democratic majority in the Senate sets up a committee charged with investigating the 1972 electoral campaign. Broadcast live on television, the hearings end up transfixing Americans.

McCord soon admits to having lied before the court due to pressure from the White House.

On June 25, Dean tells the committee that the president was aware from September 15, 1972, of a cover-up of the burglary.

He says Nixon was ready to spend nearly a million dollars to buy the burglars' silence.

He thus becomes the first witness to directly implicate the head of state.

An earthquake erupts on July 16 when an employee at the White House tells the committee the Oval Office is packed with hidden microphones. This secret bugging system, installed in 1970, is the beginning of a new scandal.

On July 23, 1973 Nixon refuses to provide the recordings to the committee.

Cornered, he ends up handing over nine tapes on October 20. But two are missing and a conversation between Nixon and his aide Dean on June 20, 1972, three days after the Watergate break-in, is inaudible.

On May 9, 1974 the Judiciary Committee of the House of Representatives launches hearings with a view to impeaching Nixon.

After a bitter year-long battle the Supreme Court orders Nixon on July 24 to hand over the missing tapes. With his back to the wall, the president agrees on August 5.

On July 30 the committee votes for three grounds for a future impeachment: obstruction of justice, abuse of power and contempt of Congress.

To avoid impeachment proceedings, Nixon announces his resignation on August 8, a first in the United States.

On September 8, 1974, his successor Gerald Ford grants him a total pardon.