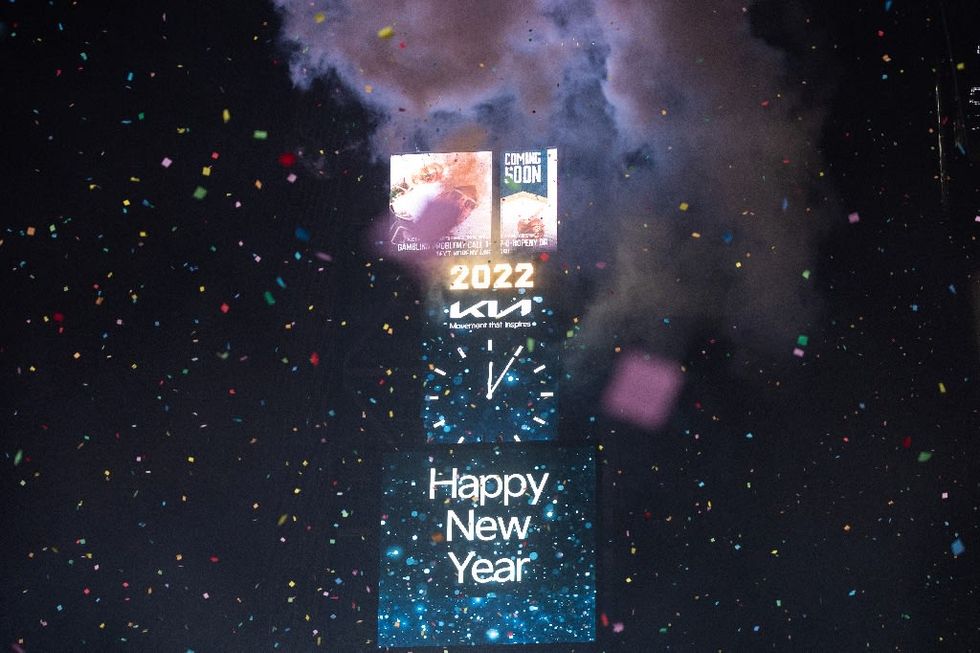 New Year has been celebrated in Times Square, at the intersection of Broadway and 42nd Street in the heart of Manhattan, since the turn of the 20th century

New York (AFP) - The city that never sleeps rang in the new year with a scaled-down ceremony in Times Square Friday night, marking 2022 with its famous ball drop and confetti.

New Year has been celebrated in bombastic style in Times Square, at the intersection of Broadway and 42nd Street in the heart of Manhattan, since the turn of the 20th century.

But outgoing mayor Bill de Blasio kept his promise to bring back the party in 2021.

Spectators kissed and hugged when the bell struck midnight, as more than 1.3 tons of confetti carrying New Year's greetings was thrown from the roofs of buildings bordering Times Square.

"The ball drop, the experience and the lights, the beautiful scenery and seeing people like this, it's really beautiful," said 12-year-old Taliya Green, whose family drove 23 hours from Boca Raton, Florida to attend.

"It's my second time coming here and I still love it."

'This is a dream'

Green's was not the only family to make the journey to the Big Apple for the festivities.

"This is a dream of ours," Chroni Stokes, who flew in with her partner from the southern city of Memphis, Tennessee, told AFP.

Facing a rapid rise in infections of the Omicron variant in the last few weeks and fears of a return to the nightmare of 2020 -- when the city was the epicenter of the epidemic -- New York State has staked everything on mass vaccinations and testing.

Friday saw state governor Kathy Hochul report that in the last 24 hours more than 76,500 people had tested positive for Covid-19. More than 8,000 patients are in hospital.

Mckenzie Lillard, who traveled all the way from Denver, Colorado and got a Covid booster, said she was feeling less worried about the virus.

Times Square was also host to political theater Friday night with the transfer of power just after midnight from de Blasio to Eric Adams, a former policeman elected in November on a platform of fighting crime and socio-economic inequalities in the city.

Adams, holding up a portrait of his deceased mother, took an oath on the Bible alongside his family -- having earlier hailed the indefatigability of the city he is now tasked with running.

"And trust me, we're ready for a major comeback because this is New York."