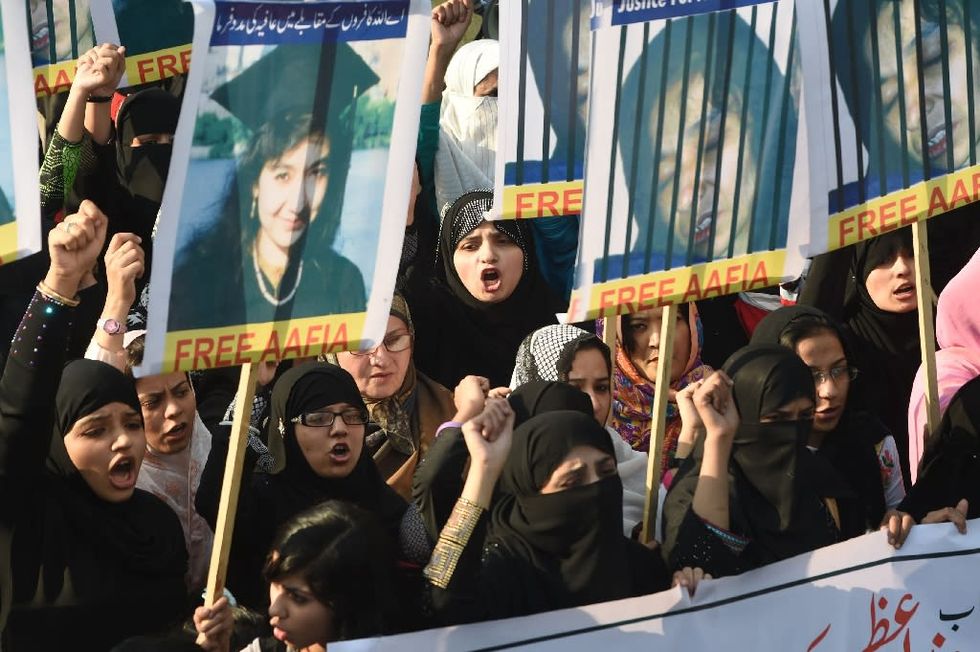 Pakistani protesters carry portraits of Aafia Siddiqui, whose imprisonment in the US has long been a matter of tension between Islamabad and Washington

Islamabad (AFP) - Aafia Siddiqui, a Pakistani prisoner in the United States whose release was reportedly demanded by a Texas hostage-taker this weekend, is serving an 86-year sentence for the attempted murder of American soldiers.

Four people were freed unharmed on Sunday following a more than 10-hour standoff at a synagogue in the US state. Their suspected captor was killed.

Media, quoting a US official briefed on the matter, reported that the man was calling for the release of 49-year-old Siddiqui.

Her lawyer said in a statement to CNN that she had "absolutely no involvement" in the hostage situation, and condemned the man's actions.

A US-educated Pakistani scientist, she was jailed in 2010 for attacking American soldiers in Afghanistan.

She was the first woman to be suspected of Al-Qaeda links by the US, but never convicted of it.

At 18 years old Siddiqui travelled to the US, where her brother lived, to study at Boston's prestigious MIT, later earning a PhD in neuroscience at Brandeis University.

But after the 9/11 terror attacks of 2001, she came up on the FBI's radar for donations to Islamic organisations and was linked to the purchase of $10,000 worth of night-vision goggles and books on warfare.

The US suspected she joined Al-Qaeda from America, returning to Pakistan where she married into the family of Khalid Sheikh Mohammed –- an architect of the 9/11 attacks.

She disappeared in around 2003, along with her three children, in Karachi.

Five years later she turned up in Pakistan's war-torn neighbour Afghanistan, where she was arrested by local forces in the restive southeastern province of Ghazni.

During her interrogation by US forces, she grabbed a rifle and opened fire, while screaming "Death to America" and "I want to kill Americans".

The soldiers escaped unhurt, but she was injured.

Her imprisonment sparked outrage in her home country and her supporters claim she was the victim of a secret Pakistan-US plot.

After she was sentenced, Al-Qaeda's then number two called on Muslims to "avenge" the decision.

Her release has previously been at the centre of militants' demands, including during two hostage crises in Pakistan as well as the capture of James Foley, an American journalist who was beheaded by the Islamic State in 2014.

Michael Kugelman, a South Asia analyst, tweeted: "Siddiqui isn't well known in the US, but in Pakistan she's a big name -- many view her as an innocent victim."

In a previous article, he described her as a cause celebre among Islamist militants, and said she was viewed as a "powerful symbol of how poorly Americans treat innocent Muslims in the global campaign against terror".

The issue has remained a matter of long-running tension between Pakistan and the US.

During his election campaign, Pakistan Prime Minister Imran Khan, an open critic of US action linked to the war on terror, vowed to get her released. He offered to free Shakeel Afridi, who is languishing in Pakistani jail over his role in helping Americans trace Al-Qaeda founder Osama Bin Laden in Pakistan.