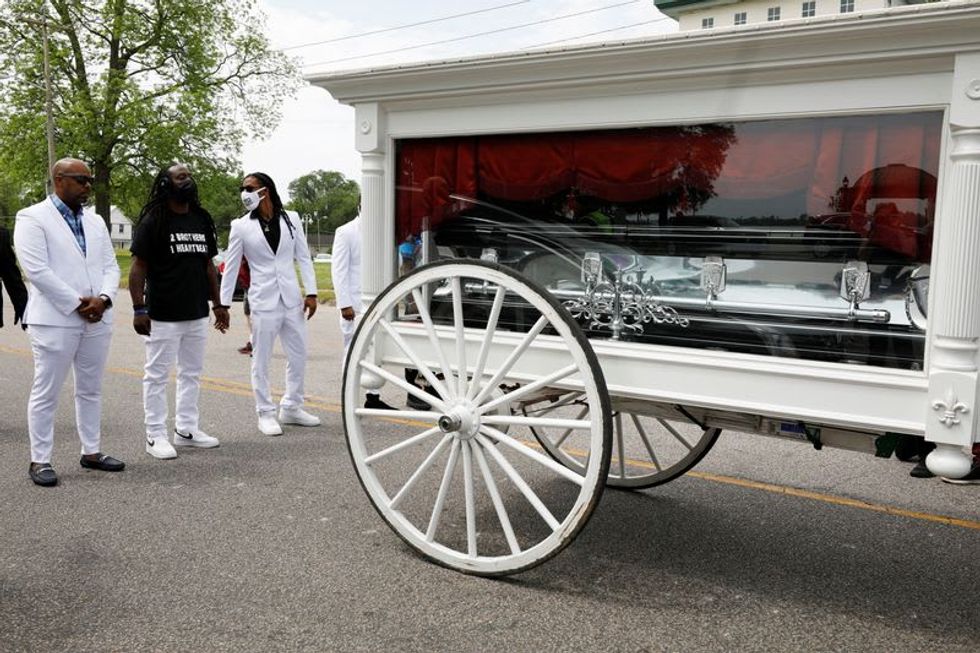 Speaking over Brown's casket, Rev. Al Sharpton told the congregation that the drive to reform policing in the United States was a chapter in a decades-long struggle by Black Americans.

"We must deal with the inequality in the criminal justice system today," said Sharpton, his voice booming at the Fountain of Life Church in Elizabeth City. "That's the sign of the time."

Officials said Brown, 42 was fatally shot during a morning raid at his home on April 21 as Pasquotank County sheriff's deputies tried to serve him with search and arrest warrants.

His death under unclear circumstances has captured national attention. It occurred a day after former Minneapolis police officer Derek Chauvin was convicted of murdering George Floyd in a highly publicized trial.

Brown's shooting, and a decision by authorities not to immediately make public a video of the incident, triggered suspicion and several boisterous but peaceful demonstrations in Elizabeth City, a riverfront community whose population of roughly 18,000 is half African American.

"I know a con game when I see it," said Sharpton. "Release the whole tape, and let the folk see what happened to Andrew Brown."

A North Carolina judge on Wednesday rejected requests to release four videos from body-worn police cameras of the shooting, siding with arguments their immediate disclosure could jeopardize active investigations.

Superior Court Judge Jeff Foster said he was delaying the release for 30 to 45 days to allow state investigators and the local prosecutor to complete their investigations.

Accounts of the incident by people who have seen some of the videos have varied widely.

Lawyers for Brown's family said a 20-second portion of the video they were allowed to see showed that he was "executed" by the deputies. The family said the deputies continued shooting at him in his driveway after he drove away from them.

But Pasquotank County District Attorney Andrew Womble said officers fired only after Brown's car lurched toward them and made contact with them.

A private autopsy conducted by Brown's family found that he was struck by five bullets, including a fatal one to the rear of his skull.

Pasquotank County Sheriff Tommy Wooten and Chief Deputy Daniel Fogg have said the shooting occurred as deputies were trying to serve arrest and search warrants on Brown stemming from a felony drug charge, adding that Brown had a history of resisting arrest.