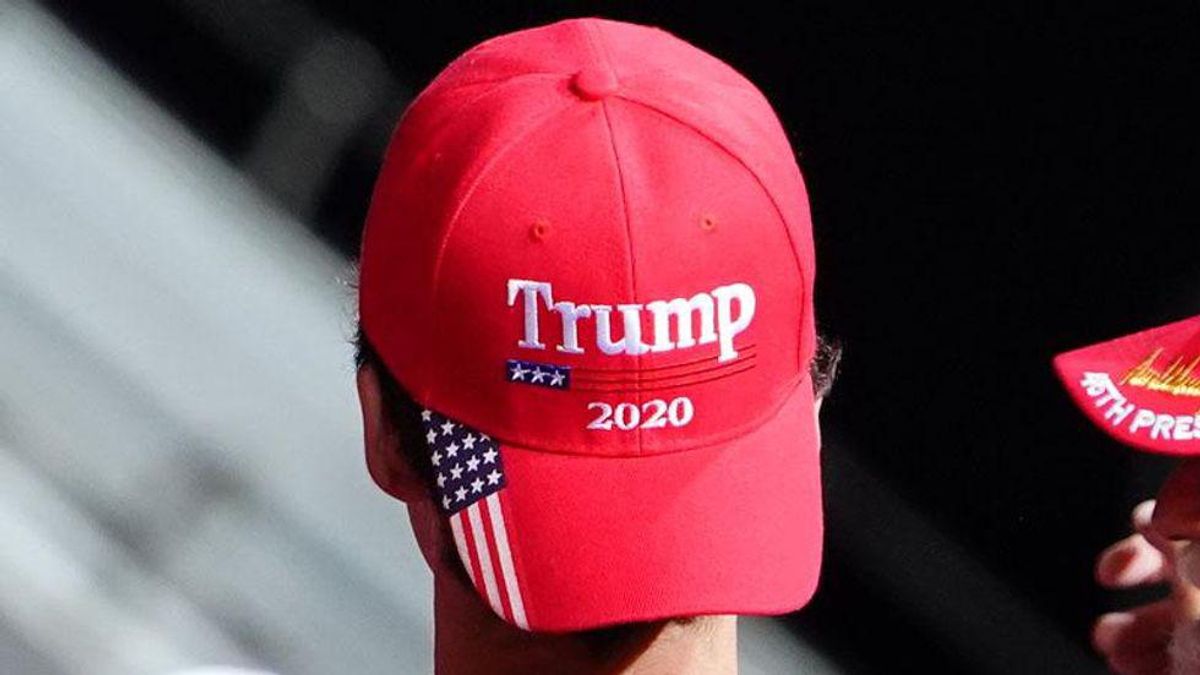 A Trump supporter at a rally in Mosinee, Wisconsin. (Shutterstock.com)

I wrote a few weeks ago about several jarring incidents in which rainbow flags symbolizing queer Pride were vandalized or had triggered acts of violence against people, in addition to demands of removal from property.

Now comes this story this week out of Eastland Cove, a condo development just north of gay-friendly Fort Lauderdale, in Broward County, Florida. A gay couple, Mike Ferrari and Bob Plominski, have lived there for over 10 years, and have hung Pride flags in the past. But this year they received a letter from the Eastland Cove Homeowners Association that they must remove their flag from their mailbox or be fined $50 and $10 additionally for each day they refuse to remove it. They're standing firm, and have taken their story nationally.

A Florida homeowners association has ordered a gay couple to remove a small rainbow flag from their front yard or p… https://t.co/NVMcprgwFM
— NBC News (@NBC News) 1624124765.0

Sure, homeowners associations have wide discretion on decorations, including flags, and some are quite strict. But the key issue here is that Ferrari and Plominki have flown a rainbow flag for years. The association's rules state that only American flags, state flags or military flags may be flown, but no one complained in the past. Now, however, one or more people lodged a complaint and the board says it was compelled to demand the couple remove the flag.

Why didn't anyone care enough in the past to file a complaint, but now they have? It could be any of a number of reasons — including someone new moving in — but I'm betting, looking at what's happening all over the country, that it's more of an assertion of backlash by people who were emboldened by Donald Trump's expressions of hate. That included his administration's stripping LGBTQ rights and removing rainbow decorations and Pride flags from embassies around the world. The Trump White House had reversed course from the Obama White House, not marking Pride month with a proclamation, nor flying a rainbow flag or lighting the White House in rainbow colors.

But President Joe Biden, in rapid pace, reversed Trump's horrific executive orders that harmed LGBTQ people. And now the embrace of Pride by the White House is back — and the flags are flying at embassies around the world, including at the Vatican — while the haters are lashing out now in an act of resistance in Biden's America.

Certainly there have been hateful attacks on Pride flags since the time it was created by activist Gilbert Baker in 1978, through some of the most overtly homophobic times this country has seen, including during the escalation of the AIDS crisis. But in 2021 the attacks seem to have escalated in a way that shouldn't be happening at this point in time. It's like we're gong backwards — or there is a backlash by people who feel very threatened by the current reality, in which Trump lost the election but they believe it was stolen and their rightful place was taken away. As I wrote a few weeks ago:

A Sacramento church had its Pride flag burned last week. A student in Florida was brutally stomped on for bringing a Pride flag to a picnic. Boaters terrorized people in another boat on a lake in Washington state two weeks ago because they flew Pride flags on their boat (Ironically, the only harm came to the harassers, whose boat exploded, ignited by an engine fire during the altercation). Wisconsin homeowners were told by their association to remove Pride flags; they got creative and doused their home in rainbow floodlights.

And on social media people are reporting their flags stolen or vandalized.

This is obviously beyond complaints about the flag being flown, with some incidents resulting in violence. The student in Largo, Florida who carried a Pride flag, a 12-year-old named Leo Hoffman, who identifies as nonbinary, was "drug to the ground, stomped on, and covered in water" as students attempted to wrestle the Pride flag away. A relative posted a video of the violent incident on Twitter:

During the Trump administration a study commissioned by GLAAD showed how people became emboldened to express their animosity toward LGBTQ people, showing less acceptance publicly. I believe that just like everything else regarding the Trump base, there's resistance to and anger at the reality of the Biden era, and the embrace of LGBTQ rights.

It's true Trump actually unfurled a rainbow flag during his 2016 campaign at an event, in an attempt to insinuate he supported LGBTQ rights while he made promises to enemies of equality. But by 2020 there was no such attempt to even fake it, as the religious right wouldn't tolerate it and he desperately needed them. Trump not only refused to acknowledge Pride; he banned Pride flags from flying at embassies around the world, and the Pentagon banned Pride flags from being displayed on military bases.

It shouldn't come as a surprise that those who Trump encouraged in their hatred of LGBTQ people would now be lashing out at displays of rainbow flags — whether by burning them, stealing them or engaging in violence against those who are carrying them.

A bright spot has been the powerful support the targets of these attacks have often received, in their communities and beyond. The couple in Broward County who hung a rainbow flag and received a notice from the homeowners association received support from many neighbors who have now put up their own rainbow flags. Their story has gone national and support has come from around the world.

And, in a related Pride story, it was amazing to see the first NFL player come out yesterday, marking Pride month. Las Vegas Raiders' Carl Nassib, announced he is gay and is celebrating his coming out by donating $100,000 to the Trevor Project, the group focused on prevention of suicide among LGBTQ youth. These actions show both how far we have to go — that it's even news that an NFL player came out — and how a moment like this, which underscores the importance of visibility, could really push back against the hate we're seeing as the Trumpian backlash unfolds.

Symbols like the Pride flag can be taken for granted or even scoffed at by some who just are not flag-wavers. But when the attacks on the flag are part of a backlash by people who feel empowered in this time, it's an attack on all of us who are gay, lesbian, bisexual or transgender.