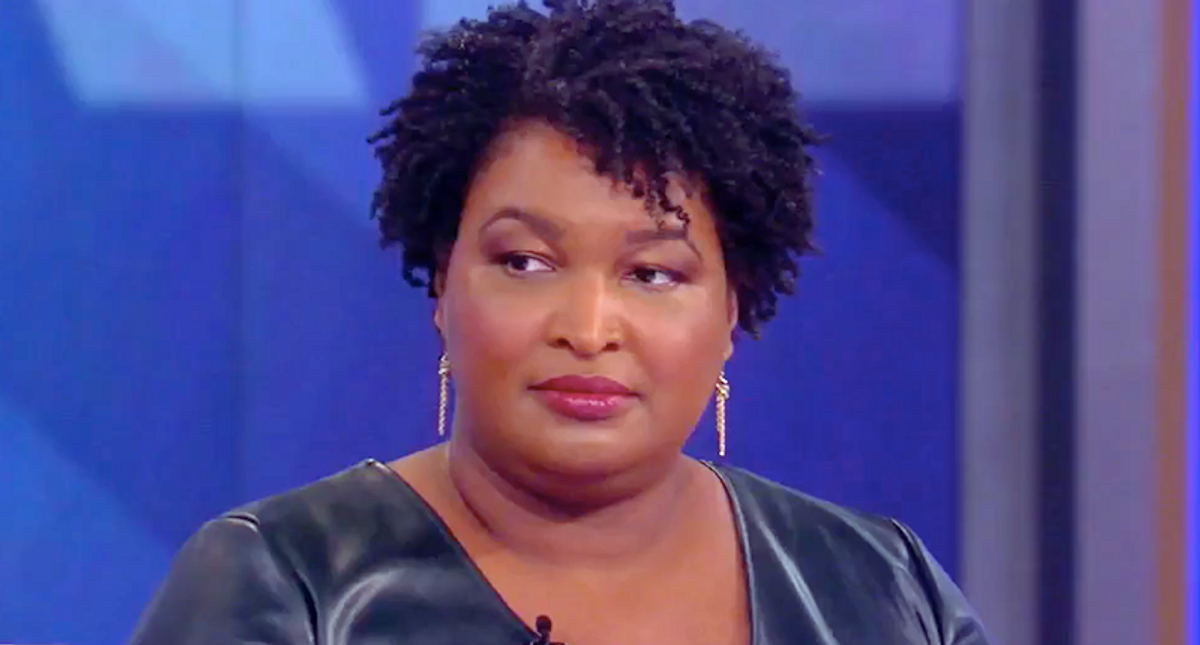 As Republicans predictably cried foul over Major League Baseball's Friday decision to relocate the 2021 All-Star Game from Atlanta in response to Georgia's restrictive new voting law, prominent Democrats blamed the GOP for the economic toll the move will take on the Peach State.

"Georgia Republicans must renounce the terrible damage they have caused to our voting system and the harm they have inflicted on our economy."
—Stacey Abrams,
Voting rights campaigner

Voting rights campaigner and former Georgia gubernatorial candidate Stacey Abrams—a Democrat whose loss some prominent observers have blamed on voter suppression—weighed in on MLB's decision to deprive their state of an event that generates anywhere from tens of millions of dollars to over $100 million in revenue.

Abrams said in a statement that the Republicans behind the new law passed it "knowing the economic risks to our state" yet "prioritized making it harder for people of color to vote over the economic well-being of Georgians."

"Like many Georgians, I am disappointed that MLB is relocating the All-Star Game," she said. "However, I commend the players, owners, and league commissioner for speaking out."

"Georgians targeted by voter suppression will be hurt as opportunities go to other states," Abrams added. "Georgia Republicans must renounce the terrible damage they have caused to our voting system and the harm they have inflicted on our economy."

In a statement Friday, MLB commissioner Robert D. Manfred Jr. said he "decided the best way to demonstrate our values as a sport is by relocating this year's All-Star Game and MLB draft."

"Major League Baseball fundamentally supports voting rights for all Americans and opposes restrictions to the ballot box," Manfred said. "In 2020, MLB became the first professional sports league to join the nonpartisan Civic Alliance to help build a future in which everyone participates in shaping the United States. We proudly used our platform to encourage baseball fans and communities throughout our country to perform their civic duty and actively participate in the voting process. Fair access to voting continues to have our game's unwavering support."

Manfred said that although the All-Star Game will be relocated, "we will continue with our plans to celebrate the memory of Hank Aaron," the Hall of Famer who played outfield for the Atlanta Braves when he broke Babe Ruth's all-time home run record in 1974, and who was a beloved community leader until his death in January.

As the Washington Post reported at the time, the law will "impose new identification requirements for those casting ballots by mail; curtail the use of drop boxes for absentee ballots; allow challenges to voting eligibility; make it a crime for third-party groups to hand out food and water to voters standing in line; block the use of mobile voting vans, as Fulton County did last year after purchasing two vehicles at a cost of more than $700,000; and prevent local governments from directly accepting grants from the private sector."

Georgia's two Democratic senators had differing views on the MLB move. In a statement, Sen. Raphael Warnock said that "businesses and organizations have great power in their voices and ability to push for change, and I respect the decision of the players to speak out against this unjust law."

"It is not the people of Georgia or the workers of Georgia who crafted this law, it is politicians seeking to retain power at the expense of Georgians' voices," he continued. "Today's decision by MLB is the unfortunate consequence of these politicians' actions."

"It is my hope that businesses, athletes, and entertainers can protest this law not by leaving Georgia but by coming here and fighting voter suppression head on, and hand-in-hand with the community," added Warnock. "Additionally, the urgency to pass federal voter protection laws grows every day, and I will continue to be a leader in that fight."

On the other hand, Jon Ossoff, Georgia's other Democratic senator, strongly opposed the relocation.

"I absolutely oppose and reject any notion of boycotting Georgia," he told the right-wing National Review. "Georgia welcomes business, investment, jobs, opportunity, and events. In fact, economic growth is driving much of the political progress we have seen here."

"Georgia welcomes the world's business," Ossoff added. "Corporations disgusted like we are with the disgraceful voter suppression bill should stop any financial support to Georgia's Republican Party, which is abusing its power to make it harder for Americans to vote."