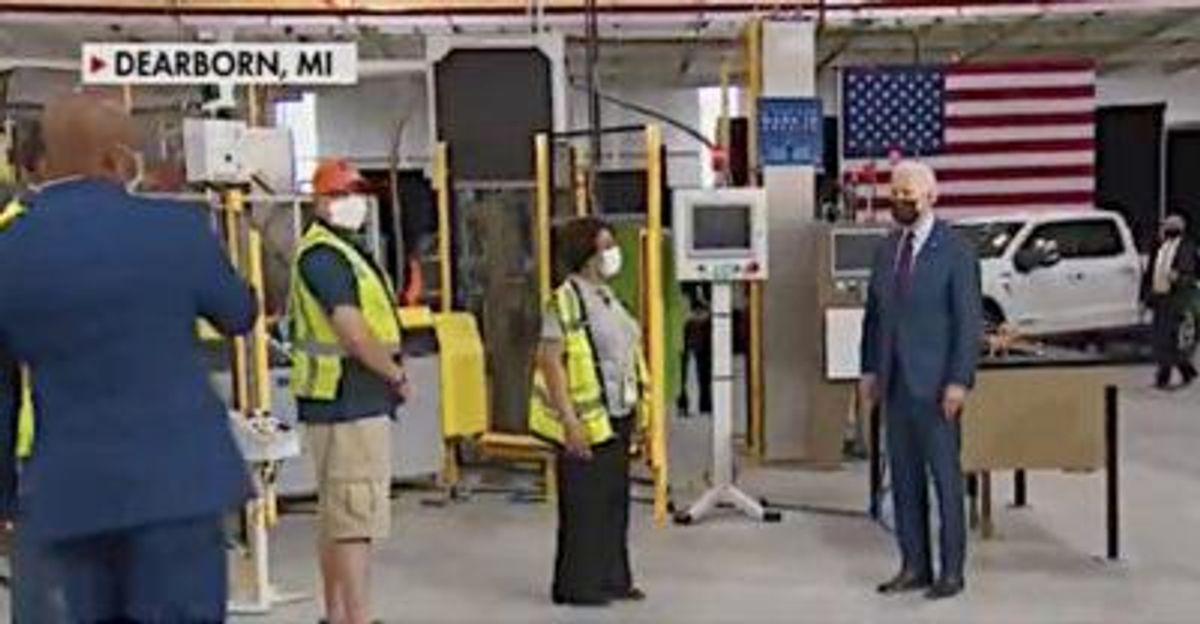 "The President is saying a lot by showing us what he's wearing," Doocy told Fox News viewers Tuesday afternoon, noting that Biden has "a face mask covering his nose which conflicts with the CDC guidance."

Doocy is wrong, which he himself acknowledges in his very next sentence.

"You don't have to do that or socially distance indoors or outdoors as long as you are vaccinated."

But you can, and you have to if the company you are visiting has a policy requiring masks, or the city or state still has a rule on masks – which it appears is still in place. Every photo of everyone inside that Ford plant, including reporters, shows them wearing masks.

Peter Doocy is in a fog of confusion over Biden wearing a mask inside an auto plant in Michigan today pic.twitter.com/NkmgPon6Wc
— Aaron Rupar (@atrupar) May 18, 2021

Doocy didn't bother to determine if Ford has a mask policy in place, as the network was forced to admit:

Moments after Peter Doocy's report, Fox News anchor John Roberts essentially confirms they didn't check to see if there is a local or business rule on mask-wearing at the Dearborn Ford plant.
"We will have to try and find out." pic.twitter.com/eq3xZu9x6s — Justin Baragona (@justinbaragona) May 18, 2021

What made Trump's refusal to wear a mask at that plant last year even worse was it wasn't manufacturing cars, but PPE and ventilators due to the pandemic.

It seems like there's a company policy to continue to wear masks. Tweets from Detroit News' Jordyn Grzelewski:

Bit hard to hear but POTUS just exchanged fist bump after talking to employees from Ford's Van Dyke plant in Sterling Heights, which is a transmission plant also building motors and transaxles for EVs. pic.twitter.com/OWj6SB7eoM
— Jordyn Grzelewski (@JGrzelewski) May 18, 2021