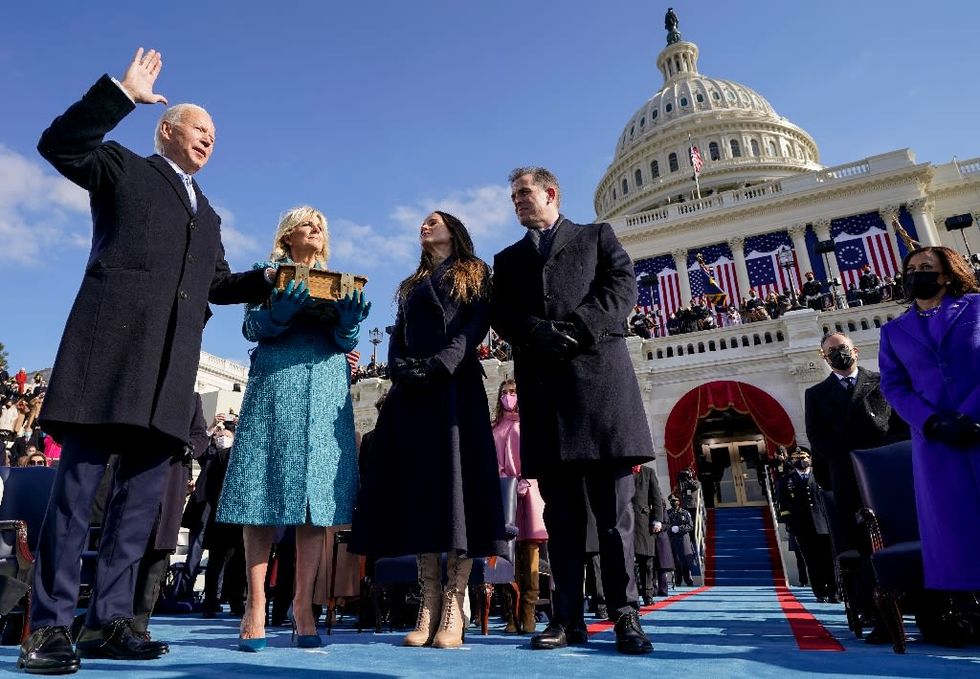 A large chuck of US President Joe Biden's legislative agenda risks stalling in the Senate, where the minority party can block legislation with just 41 out of 100 votes

Washington (AFP) - US President Joe Biden and Democrats hailed passage of historic pandemic relief this week, but other priorities which cleared the House including bolstering voting rights are likely destined for the "graveyard" of a 50-50 Senate.

The latest big Democratic wins landed Thursday, when the House of Representatives passed two measures aimed at enhancing background checks for gun purchases and closing a loophole related to a deadly 2015 church shooting in Charleston.

The bills address an overwhelmingly popular premise among American voters: that background checks be required for all US firearm sales, including those at gun shows.

"A vote is what we need... not thoughts and prayers," Senate Majority Leader Chuck Schumer said Thursday.

With Democrats in control, "the legislative graveyard is over."

The Senate is evenly divided, and Democrats control the chamber because Vice President Kamala Harris would cast the deciding vote in the event of a 50-50 tie.

Even so, they are bumping up against an increasingly controversial Senate blocking tactic known as a filibuster, which allows the minority party to prevent a bill from advancing unless it wins support from 60 senators.

That means much of Biden's early political to-do list faces a near impossible threshold for getting to his desk, even with both chambers of Congress controlled by Democrats.

The House, under the guidance of Speaker Nancy Pelosi, has passed initiatives to change policing policies, ban discrimination based on sexual orientation or gender identity, and expand union rights.

Other bills in the pipeline like immigration reform, including a potential pathway to citizenship for millions of undocumented people, would also be subject to a 60-vote threshold.

If Democrats are unable to convince a least 10 Republicans to get on board -- a heavy lift in heavily partisan Washington -- such legislation will languish in the Senate.

The $1.9 trillion Covid relief package was able to pass by simple majority because Democrats used Senate budget reconciliation rules that allow legislation to bypass the filibuster if it is deemed relevant to federal spending.

But with much of the rest of Biden's agenda under threat, several congressional Democrats have spoken up in favor of abolishing the filibuster altogether.

Biden -- who served in the Senate for 36 years and cherishes its norms -- is hesitant to pull the pin on such a potent political grenade, preferring instead to seek common ground with rivals.

"The president's preference is not to get rid of the filibuster," White House Press Secretary Jen Psaki told reporters this week.

Filibuster use has already been narrowed. In 2013, when president Barack Obama's judicial nominees were being stalled by then-majority leader Mitch McConnell, Democrats took action.

They invoked the so-called "nuclear option" which lowered the threshold to a simple majority for all judicial nominees and executive-office appointments -- but kept the 60-vote supermajority for Supreme Court picks.

Republicans were irate at what they deemed a Democratic power grab.

But in 2017, with the positions reversed and Donald Trump as president, McConnell engineered the removal of the filibuster for Supreme Court picks, too.

Now debate swirls about ending the legislative filibuster, a move some critics warn would irrevocably change the deliberative nature of the Senate.

Amid the stalemate, Schumer has already been branded the Senate's "cemetery caretaker."

"Maybe we'll get the votes," he said of the background check bills. "And if we don't, we'll come together as a caucus and figure out how we're going to get this done."

Meanwhile the Democrat in the spotlight is Senator Joe Manchin, who opposes killing the filibuster.

Asked last week whether he could be swayed, the West Virginian lost his cool.

"Never!" he shouted to a journalist. "Jesus Christ, what don't you understand about 'never'?"

Manchin is the most conservative Democrat in the caucus, and has repeatedly warned his party about opening a Pandora's box on the filibuster.

"What goes around comes around," he said according to The Hill.

"Whatever you do here -- and you think you have the ability to do it by using the procedures and the rules -- it will come back around to you and it will hurt you."