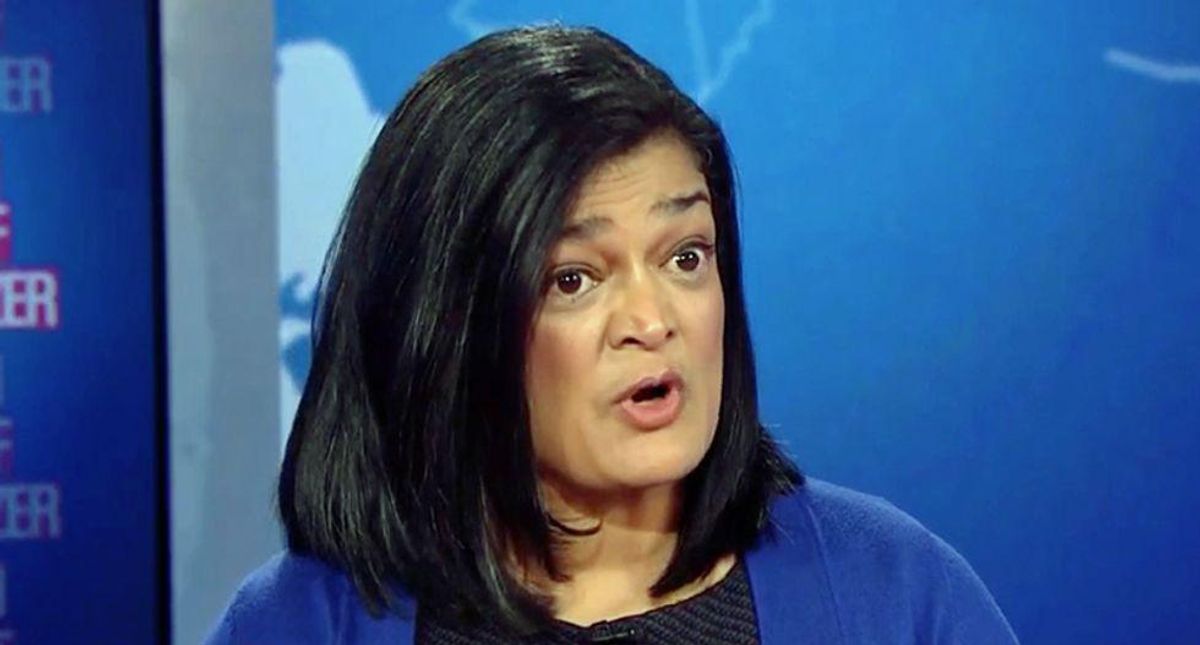 House progressives made clear Wednesday night that they are willing to vote down a newly etched bipartisan infrastructure deal unless a sweeping budget reconciliation package advances simultaneously, a threat that came after Democratic Sen. Kyrsten Sinema announced her opposition to a $3.5 trillion climate and social spending proposal.

Rep. Pramila Jayapal (D-Wash.), chair of the nearly 100-member Congressional Progressive Caucus, said that "a small bipartisan infrastructure bill doesn't have a path forward in the House unless it has a jobs and families package with our progressive priorities alongside it."

Late Wednesday, just 24 hours after the deal appeared to be on the verge of collapse due to disputes over transit funding and other issues, the Senate voted with the White House's blessing to take up bipartisan infrastructure legislation that calls for just $550 billion in spending over eight years—a far cry from the $2.2 trillion President Joe Biden pushed for in his original American Jobs Plan.

The new bipartisan deal—negotiated by a group of more than 20 senators led by Sinema and Rob Portman (R-Ohio)—is slightly smaller than the framework that Biden endorsed last month, and it includes tens of billions in funding for roads, bridges, waterways, public transit, and broadband but little by way of climate investment.

Because the agreement does not include any tax increases and Republicans stripped out funding to help the IRS pursue rich tax cheats, questions remain over how the legislation will be financed. Among the proposed pay-fors is a vague—and potentially insidious—plan to root out "fraud" in unemployment insurance.

And while progressives were alarmed by privatization schemes in the original bipartisan deal, such provisions appear to have been dramatically curtailed in the new agreement.

"In order to start work on a reconciliation bill, the Senate must pass a budget resolution first," said Schumer. "As I've said repeatedly, our goal was to pass both bills this session, hopefully in July. My goal remains to pass both the bipartisan infrastructure bill and a budget resolution during this work period. Both. It might take some long nights. It might eat into our weekends. But we are going to get the job done. And we are on track."

But that two-track approach could be imperiled by Sinema's opposition to the $3.5 trillion budget reconciliation proposal that Senate Democratic leaders unveiled earlier this month in an effort to address the major shortcomings of the bipartisan package.

To pass a bill through the arcane reconciliation process, Democrats need all 50 votes from their Senate caucus.

"While I will support beginning this [reconciliation] process, I do not support a bill that costs $3.5 trillion—and in the coming months, I will work in good faith to develop this legislation with my colleagues and the administration," Sinema (D-Ariz.) said Wednesday, taking a position that Senate Minority Leader Mitch McConnell (R-Ky.) applauded as "very courageous."

Several House progressives, including prominent members of the so-called "Squad," responded with outrage to Sinema's statement and indicated they would vote no on any bipartisan infrastructure bill not accompanied by a bold reconciliation package. Given Democrats' narrow margins in the House, it likely wouldn't take many progressive defections to tank the bipartisan bill.

"Sinema seems not to care that her own state is flooding, the West is burning, and infrastructure around the country is crumbling," said Rep. Rashida Tlaib (D-Mich.). "Sinema is more interested in gaining GOP friends and blocking much needed resources than fighting for her residents' future."

"Time for the White House to play hardball," Tlaib added. "We didn't elect Sinema as president and we won't let her obstruction put a Republican in the Oval Office in 2024. It's the reconciliation bill or GOP controlling every level of government again, period."

"Biden and Congress can't get distracted by this pathetic version of an infrastructure package that only waters down much needed climate priorities, like transit, even further," Maunus said. "The climate crisis is here—and we see it every day with fatal heat waves, monsoons, and wildfires."

"Schumer should only bring forward the bipartisan deal if he has every Democratic senator's vote for at least a $3.5 trillion reconciliation bill first," Maunus added. "Progressives made it clear and are not backing down: no climate, no deal."