'Kicking you when you're down': Many cancer patients pay dearly for parking 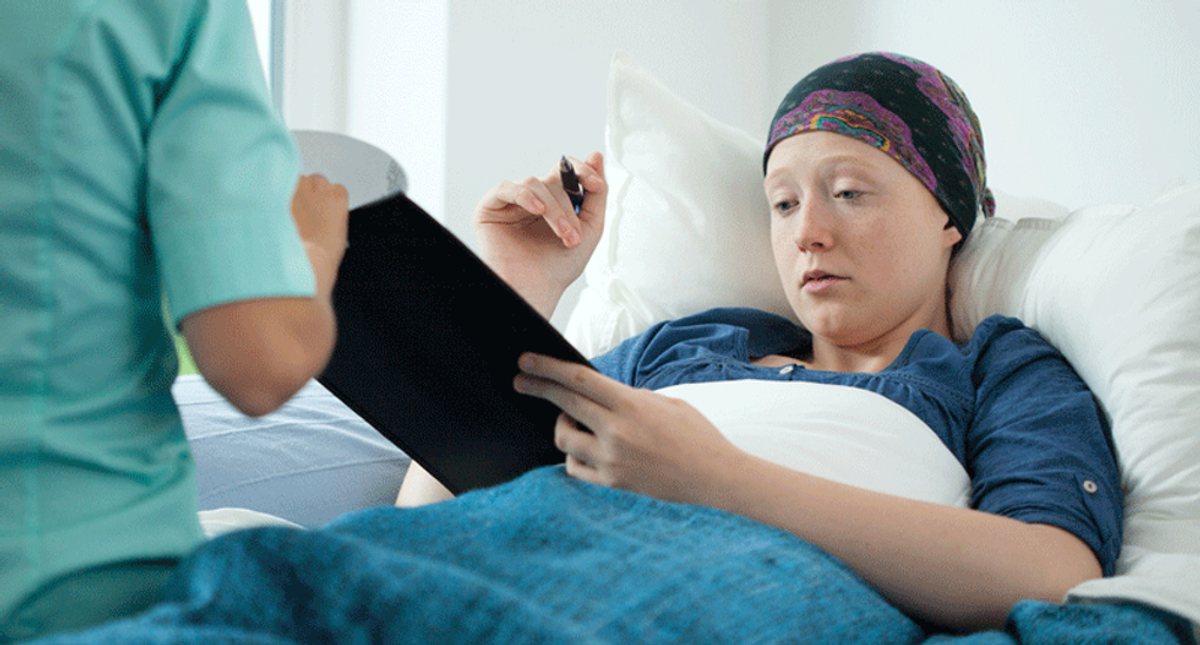 Young woman with cancer signing documents in a hospital (Shutterstock)
For cancer patients, the road from diagnosis to survivorship feels like a never-ending parade of medical appointments: surgeries, bloodwork, chemotherapy, radiation treatments, scans. The routine is time-consuming and costly. So, when hospitals charge patients double-digit parking fees, patients often leave the garage demoralized.

This story also ran on NBC News. It can be republished for free.

Iram Leon vividly remembers the first time he went for a follow-up MRI appointment at Dell Seton Medical Center in Austin, Texas, after he had been treated at another hospital for a brain tumor.

The medical news was good: His stage 2 tumor was stable. The financial news was not. When he sat down at the receptionist's desk to check out, Leon was confronted by a bold, red-lettered sign on the back of her computer that read: “WE DO NOT VALIDATE PARKING."

Below that all-caps statement was a list of parking rates, starting with $2 for a 30-minute visit and maxing out at $28 a day. Lose your ticket? Then you could pay $27 for an hour.

“To this day, I remember that sign," Leon, 40, said of the 2017 appointment, which he posted about on Facebook. “These patients were people who were coming in for various types of cancer treatment. These were people who were keenly aware of their own mortality, and yet the sign was screaming at them, 'We do not validate parking.'" (Hospital officials did not respond to requests for comment about their parking policy.)

JulieAnn Villa, who was diagnosed in March with her third bout of cancer, estimates she has spent “thousands of dollars" on parking fees during her years of treatment and follow-up care. She faces a transportation dilemma every time she commutes 6 miles to Chicago's Northwestern Memorial Hospital from her apartment. Should she take public transit? Call a pandemic surge-rate Uber? Ask a friend to drive her? Or pay $12 to $26 (with validation) to park in a garage where each floor is named after singers like Dolly Parton and Frank Sinatra?

She was hospitalized for multiple days in April after spending 23 hours alone in an overburdened ER, because she didn't want friends to pay to wait with her. “I almost drove myself, and I'm so glad I didn't," Villa said. “That would have been expensive."

Long a source of frustration for patients, the costs of parking while in cancer treatment is finally drawing national scrutiny from oncology researchers and even some hospital administrators.

“If you want to rile up patients or caregivers or family members, just bring up parking costs," said Dr. Fumiko Chino, a radiation oncologist at Memorial Sloan Kettering Cancer Center in New York who studies the “financial toxicity" of cancer treatment, including costs not covered by insurance, such as parking fees.

Chino, who enrolled in medical school after her husband died of a rare neuroendocrine cancer in 2007, added, “For people who have to pay $15 to $18 every single time, which is what I remember paying, it really feels like the last straw, frankly — like kicking you when you're down."

Public transit is possible for some cancer patients in larger cities, but not for those too ill or immunocompromised. Others have accessibility issues. Many must travel to get care, making driving the best option.

Parking fees can have implications for more than just the patient. “Some patients say, 'This is the reason I didn't participate in a clinical trial, because I couldn't afford the parking,'" Chino said.

At a time when hospitals and drug companies are under increasing pressure to diversify clinical trial populations, testing only patients who can afford high parking fees is problematic, Chino said.

There are some pilot programs to improve access to drug trials, and some charities, such as the Leukemia & Lymphoma Society, offer travel grants, but accessibility remains a substantial barrier to cancer care, said Elizabeth Franklin, president of the nonprofit Cancer Support Community, which offers financial aid to patients and advocates in Washington, D.C., for “patient-centered" health policies.

“The true definition of a patient-centered health care system," Franklin said, is one that allows patients to choose the best means of transportation. “It's not making them go into debt because they've had to pay a ton of money for parking each time they go to the clinic or the hospital."

Chino and colleagues published a short study in July showing that some cancer patients pay $1,680 over the course of treatment.

According to readership statistics released in late March, the study was the most read and downloaded article in JAMA Oncology last year, and it continues to prompt a lively social media response. A thread on Reddit has logged more than 1,100 comments, including many from patients in other countries voicing surprise at U.S. parking policies.

The researchers calculated the cost to park at 63 National Cancer Institute-designated cancer centers while receiving the standard number of treatments for each of three types of cancers: node-positive breast cancer, head and neck cancers, and acute myeloid leukemia, or AML. They did not calculate costs for follow-up appointments, blood draws, routine scans and immune-boosting injections.

They found that, while 20 of the hospitals provided free parking for all cancer patients, the other 43 had widely varying fees.

“The range was $0 to $800 for breast cancer," Chino said. “That's huge, and it's not like the person who's paying $800 is necessarily getting any better treatment." The maximum charges for a standard course of therapy for head and neck cancer were $665 and for AML, $1,680.

Practices should change, Chino said, “to alleviate this strain for our patients."

Of the 63 hospitals, including those where parking is free for cancer patients, 54% offered free parking for chemotherapy and 68% for radiation treatment.

The top daily parking rate, according to the researchers, is $40 at New York's Mount Sinai Hospital. (A spokesperson for Mount Sinai declined to comment.) Chino's own institution, Memorial Sloan Kettering, is not far behind; parking at one of its main garages begins at $12 an hour and maxes out at $36 a day. A spokesperson for the hospital said some locations do offer free parking, and all patients can apply for aid to cover parking costs.

A few colleagues scoffed when Chino said she was researching parking charges, she said, but a growing number of mostly younger oncologists are concerned about indirect costs that contribute to the financial toxicity of cancer.

“It seems ethically incorrect to nickel-and-dime patients for parking charges," a trio of doctors wrote last year in an editorial published by the American Society of Clinical Oncologists. They acknowledge that most top cancer hospitals are in urban centers, where parking costs are often high and third-party agencies may operate the garages. “Nevertheless, in 2020, with our multibillion-dollar cancer center budgets, we as health care systems should do everything we can to help patients and caregivers," the editorial said.

City of Hope National Medical Center in Los Angeles is one of the 20 NCI-designated hospitals that do not charge patients for parking. Dr. Vijay Trisal, a surgical oncologist who serves as City of Hope's chief medical officer, takes pride in that distinction.

“Charging cancer patients for parking is like a knife in the back," he said. “We can't control copays, but we can control what patients pay for parking."

While Trisal would never want a patient to choose City of Hope for the free parking alone, he acknowledges the policy gives his hospital a competitive advantage.

“You would not believe how many patients have said to me, 'Thank you for not charging for parking,'" he said.