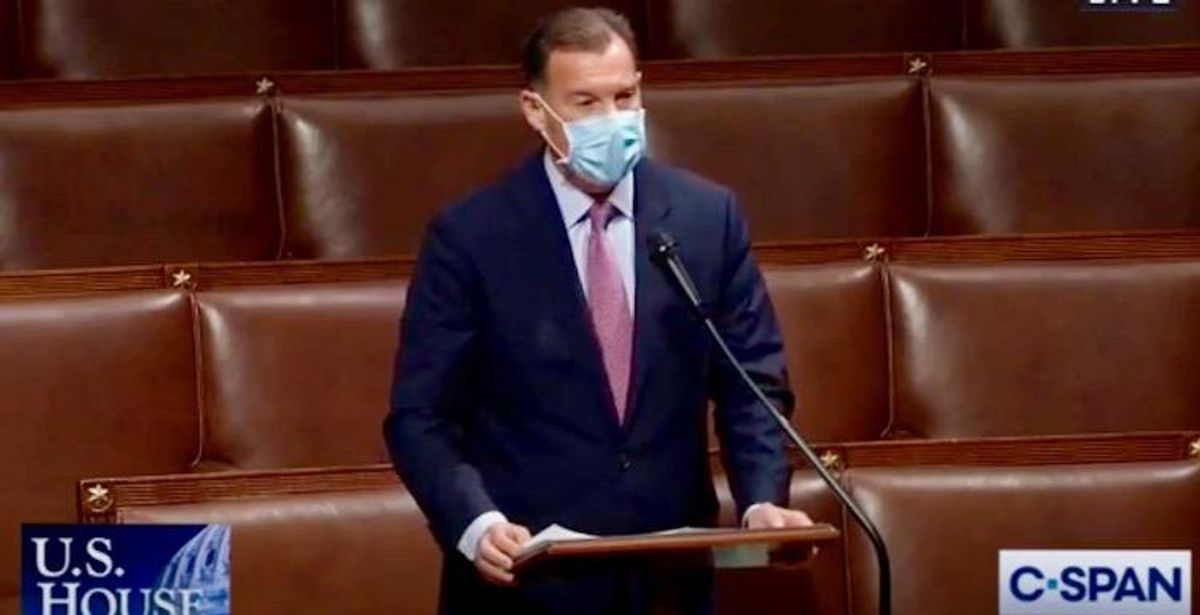 A small but potentially influential group of House Democrats on Tuesday threatened to oppose an emerging climate and infrastructure package if it does not restore a tax deduction that overwhelmingly benefits the richest households in the country.

The state and local tax (SALT) deduction was capped at $10,000 as part of the 2017 Republican tax-cut legislation, a change that prompted outcry from centrist blue-state House Democrats who represent the higher-income, higher-tax areas that were disproportionately impacted by the limit. The House voted to eliminate the cap in 2019—a move opposed by Rep. Alexandria Ocasio-Cortez (D-N.Y.) and other prominent progressives—but the effort died in the then-Republican Senate.

"They could easily just increase the cap a bit so the top one percent doesn't get the lion's share of the benefit. But Gottheimer and Suozzi want to remove the cap entirely, because that's what local oligarchs want."
—Ryan Cooper, The Week

Now, with Democrats in control of the upper chamber, several lawmakers are using their leverage in the narrowly Democratic House to try to force a full repeal of the SALT cap into upcoming legislation. The Institute on Taxation and Economic Policy (ITEP) estimates that 62% of the benefits of repeal would go to the richest 1%.

In a joint statement late Tuesday afternoon, Reps. Tom Suozzi (D-N.Y.), Josh Gottheimer (D-N.J.), and Bill Pascrell, Jr. (D-N.J.) declared that they "will not accept any changes to the tax code that do not restore the SALT deduction and put fairness back into the system."

"We say, 'No SALT, no deal,'" the lawmakers said. "The GOP passed an unfair cap of $10,000 on state and local tax (SALT) deductions to pay for their 2017 tax giveaway. Due to the GOP cap, our home states of New York and New Jersey have been crushed and residents have been leaving for other states."

The trio of House Democrats issued their demand just 24 hours ahead of President Joe Biden's expected release of a $2.25 trillion infrastructure and climate package that the president is aiming to finance by hiking taxes on the wealthy and corporations. While Biden is pushing to partially reverse some elements of the 2017 GOP tax law—including its cut to the corporate tax rate—the initial package is not expected to call for repeal of the SALT cap.

Axios reported earlier this week that Gottheimer and other centrist Democrats are pushing back against some of the proposed tax increases while simultaneously demanding repeal of the SALT cap as a necessary component of the forthcoming package.

In a column on Tuesday, The Week's Ryan Cooper argued that "Democratic moderates are holding climate policy hostage to get a tax cut for the rich." He continued:

The deduction is effectively a roundabout subsidy of high-tax blue states (because it lessens the burden of paying their often higher taxes), and capping it was a gleeful Republican finger into the eye of places like Maryland, New York, and California. But the benefits of removing the cap would be extraordinarily regressive. It would cost about $357 billion over just five years, and according to the Center on Budget and Policy Priorities, over half of that money would be collected by the top 1 percent. Meanwhile, the bottom four-fifths of Americans would get basically nothing...
There are a modest number of arguably middle-class people affected by the SALT cap, but even in New Jersey and New York the vast majority of people hit by this are very comfortable or better. If Democrats wanted to throw a bone to union pipefitters in Long Island (or whoever) paying huge property tax bills thanks to old homes that have appreciated a lot, they could easily just increase the cap a bit so the top one percent doesn't get the lion's share of the benefit. But Gottheimer and Suozzi want to remove the cap entirely, because that's what local oligarchs want.

Politico reported Tuesday that in addition to Gottheimer, Suozzi, and Pascrell, "several more lawmakers are in conversations about the [SALT cap repeal] effort and plan to formally join in the coming days."

"Right now, Speaker Nancy Pelosi and her leadership team can only afford to lose three Democratic votes," Politico noted. "The push to revisit SALT—which comes as Biden unveils his multi-trillion-dollar infrastructure proposal on Wednesday—comes with a hefty price tag: $88.7 billion for 2021 alone, and far more for a permanent repeal of the cap."

The idea of repealing the SALT cap has also won buy-in from some House progressives, including Reps. Jamaal Bowman (D-N.Y.) and Mondaire Jones (D-N.Y.)—though they have not publicly demanded repeal as part of the upcoming infrastructure package.

"There are some members who feel very strongly about it," Rep. Pramila Jayapal (D-Wash.), chair of the Congressional Progressive Caucus, told reporters Tuesday. "I'm not sure that our members will see it as one of the fundamental reforms for the tax system that would make the system more fair."