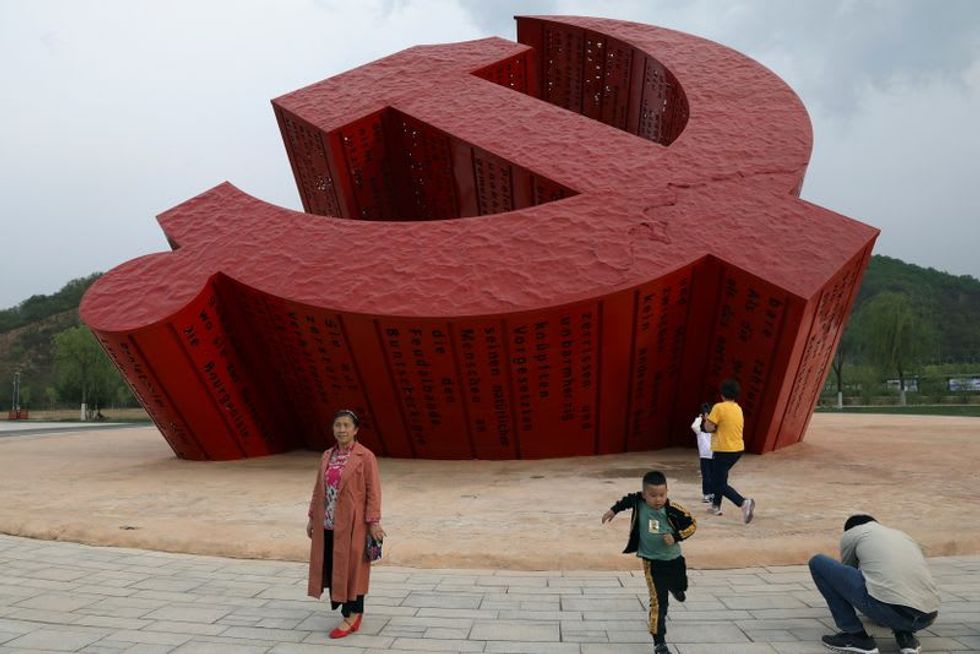 XIBAIPO, China (Reuters) - In a square in front of a Communist Party memorial hall at Xibaipo in northern China, row upon row of party members stood, raised their fists and chanted the party oath in unison.

"I will never betray the party," they called out, facing statues of the People's Republic of China founder Mao Zedong and other revolutionary leaders before moving on, to be quickly replaced by another group.

Xibaipo was an important Communist Party base during China's civil war, which ended in 1949 with the victorious communists sweeping to power.

Earlier this month, it was a stop on a four-day government-organised media tour to some of the party's most important historical sites to mark the 100th anniversary of its founding on July 1.

Thirteen delegates, including Mao, attended the first congress in Shanghai in 1921 to set up the party.

Party researchers and officials told Reuters the large numbers of visitors at Xibaipo reflects a national push to get people, especially party members and cadres, to get involved with the upcoming anniversary.

Schools are also taking part. At Xibaipo, in Hebei province, a large group of students was lined up, given small national flags and told to recite their Communist Youth League oaths, just as the senior party members were doing.

"I feel I'm taking on a responsibility to strive for the realisation of communism," said Mao Weijia, 17, a high school pupil from Hebei. "As a young person entering adulthood, I carry the future of our motherland."

The idea of the motherland also featured in Yanan, the city in northwest China mythologised in party history as the birthplace of the revolution where Mao cemented his authority as party leader. Students were seen being asked to recite the patriotic song "Ode to the Motherland" by a tour guide.

The guide, who only gave his last name as Gao, said students are brought to such sites so they understand at an early age "our proletarian forefathers' spirit of hard work and struggle".

Among the adult visitors, many, such as Zhang Zhaoyang from Hunan province, said they were in Yanan as part of a "red tourism" or party-building trip organised by their party unit or employer.

"We take party-building activities very seriously. It is the leadership of the Communist Party that gives us happiness," Zhang, 50, said.

The push to study the party's history this year is a boon to tourism in red tourist hot spots like Yanan and Xibaipo, say officials. But the trend is not new.

Nationwide, the drive to step up patriotic sentiment in part through party study has been a theme since Xi Jinping became China's leader nearly a decade ago, said Xu Jia, a researcher at the CPC Central Committee's Institute of Party History and Literature.

The push is aimed "to increase cohesion in the country", at a time when China faces challenges such as the recent trade war with the United States, Xu said.

At Yanan's China Executive Leadership Academy, one of several across the country where senior officials study the party and its history, academy Vice Director Li Guoxi explained the chief aim of their courses.

"In our cadres' education and training, we emphasise loyalty, honesty, and responsibility, but loyalty is the No.1 requirement, the priority," Li said.

Many here expressed confidence for the future of the party, which includes roughly 90 million members among China's population of 1.4 billion.

"For the next 100 years, I don't believe the Chinese people will change to another party," said Feng Jianmei, who teaches at the academy.

"It won't happen because the Chinese Communist Party has proven to the world and especially the Chinese people with 100 years of magnificent achievements that it provides an unmatched core of leadership."