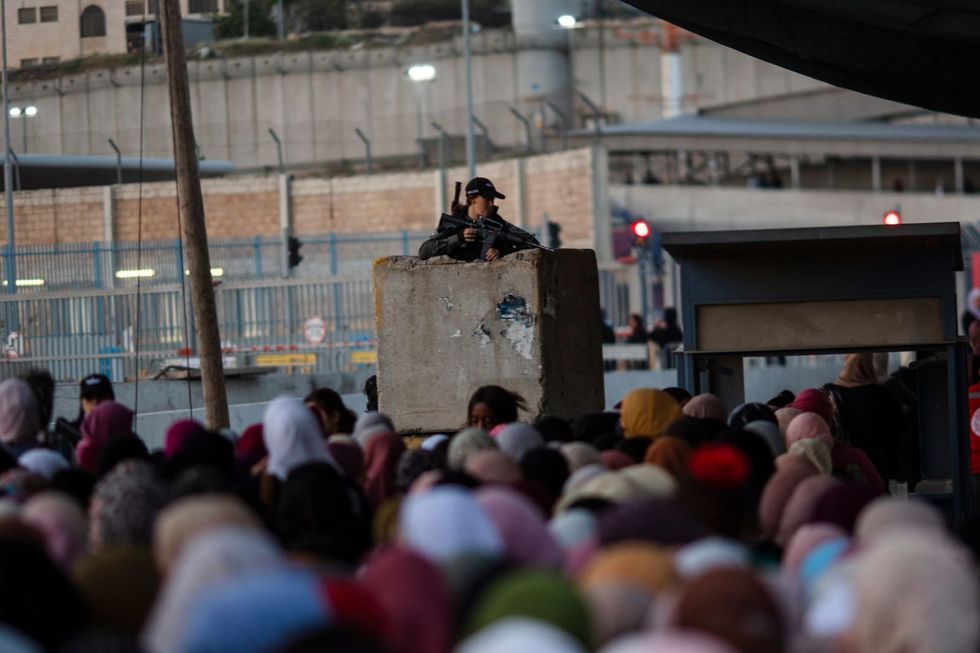 An Israeli border police stands guard as Palestinians make their way through Qalandia checkpoint to attend the last Friday prayer of the holy fasting month of Ramadan in Al-Aqsa mosque. Ilia Yefimovich/dpa

Dozens of people have been reported injured in fresh clashes between Palestinians and Israeli security forces on the Temple Mount in Jerusalem's Old City, referred to by Muslims as the Noble Sanctuary.

The violence on the last Friday of the Muslim fasting month of Ramadan left some 42 people wounded, according to Palestinian news agency Wafa.

There have been repeated confrontations on the Temple Mount in the past two weeks, while the security situation across Israel remains tense after a wave of attacks.

According to the police, hundreds of people, some of them masked, had provoked unrest at the holy site. Stones and fireworks had been thrown in the direction of the Western Wall, a place where Jews gather to pray.

The police said they then entered the area to quell the disturbance.

The Temple Mount compound is the site of the Dome of the Rock and the al-Aqsa Mosque, the third holiest site in Islam.

It is also sacred to Jews because two Jewish temples used to stand there.

The compound is under Muslim administration, while Israel is responsible for security.

According to an agreement with the Muslim authorities, Jews are allowed to visit the site, but not to pray there.

The Palestinians accuse Israel of trying to expand the rights of observant Jews at the holy site.

Speaking with the host, Johnston claimed having the former president at the top of the ticket would be a big win for Democrats who see him as eminently beatable.He noted it could be even worse if he is denied his thrird run as a Republican.