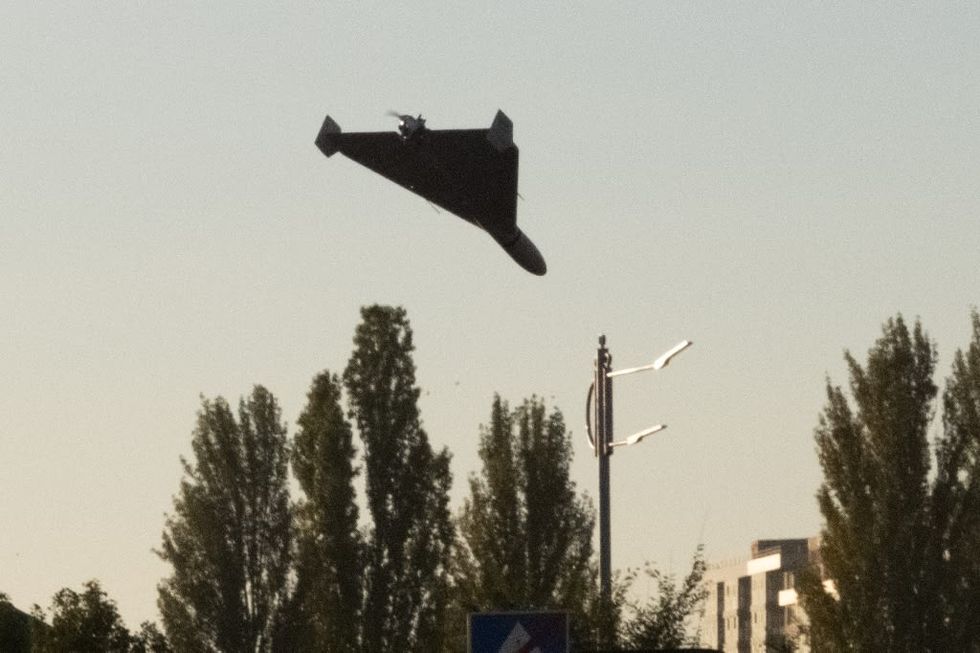 A drone approaches for an attack in Kyiv

Kyiv (Ukraine) (AFP) - Moscow on Monday stepped up attacks across Ukraine, cutting electricity and killing eight people, including in kamikaze drone strikes on the capital, as a Russian warplane crashed near the border.

The plane struck a residential area of Yeysk, a town in southwestern Russia, according to Russian authorities.

Moscow is thought to be trying to counter battlefield losses in its eight-month war in Ukraine by waging a punitive policy of striking energy facilities before winter in a move President Vladimir Putin hopes will weaken resistance.

Ukrainian Prime Minister Denys Shmygal said Russia launched five strikes in Kyiv and against energy facilities in Sumy and the central Dnipropetrovsk regions, knocking out electricity to hundreds of towns and villages.

Ukraine said four people were killed in Kyiv, including a married couple expecting a baby, and another four in the northeast region of Sumy.

An AFP journalist saw drones swooping low over central Kyiv on Monday as police tried to shoot them down with automatic weapons and smoke rose from explosions across the city.

Iran denies exporting any weapons to either side, but the United States warned it would take action against companies and nations working with Tehran's drone programme following the strikes in Kyiv.

Call for Russia to be ousted from G20

The strikes come exactly a week after Russian missiles rained down on Kyiv and other cities on October 10 in the biggest wave of attacks in months, killing at least 19 people, wounding 105 others and sparking an international outcry.

"They seem to be hitting us every Monday now," said taxi driver Sergiy Prikhodko, who was waiting for a fare near the central train station in Kyiv.

"It's a new way of starting the week," he told AFP.

Air raid sirens sounded in Kyiv shortly before the first explosion at around 6:35 am (0335 GMT), followed by sirens across most of the country.

"Kamikaze drones and missiles are attacking all of Ukraine. The enemy can attack our cities, but it won't be able to break us," President Volodymyr Zelensky said.

"Russia will not achieve anything with this form of terror even now when we still do not have a sufficient number of air defence and missile defence systems," the president added.

Senior presidential aide Mykhaylo Podolyak called for Russia to be excluded from the G20 following the strikes.

"Those who give orders to attack critical infrastructure, to freeze civilians and organise total mobilisation to cover the frontline with corpses, cannot sit at the same table with leaders of (the) G20," he said in a statement on social media, calling for Russia to be "expelled from all platforms".

In Moscow, mayor Sergei Sobyanin announced that Russian army draft offices would close from Monday, saying the Kremlin's mobilisation quotas to recruit reservists to fight in Ukraine had been completed in the capital.

Meanwhile, Ukraine announced it had swapped more than 100 prisoners with Russia in what it said was the first all-female exchange with Moscow since the invasion began on February 24.

"The more Russian prisoners we have, the sooner we will be able to free our heroes. Every Ukrainian soldier, every front-line commander should remember this," Zelensky said.

NATO launched regular nuclear deterrence drills in western Europe, which were planned before Russia invaded Ukraine, rejecting calls to scrap the exercises after Putin ratcheted up veiled threats to launch a nuclear attack.

The exercises will involve US B-52 long-range bombers, and up to 60 aircraft in total will take part in training flights over Belgium, the United Kingdom and the North Sea.

Meanwhile, Moscow ally Belarus said as many as 9,000 Russian soldiers and around 170 tanks would be deployed in the country to build up a new joint force, which it said will be uniquely defensive and aims to secure its borders.

In the south, Ukrainian troops have been pushing closer and closer to the large city of Kherson, just north of Crimea.

Kherson is one of four regions in Ukraine that Moscow recently claimed to have annexed.