Drought-hit California scales up plan to truck salmon to ocean 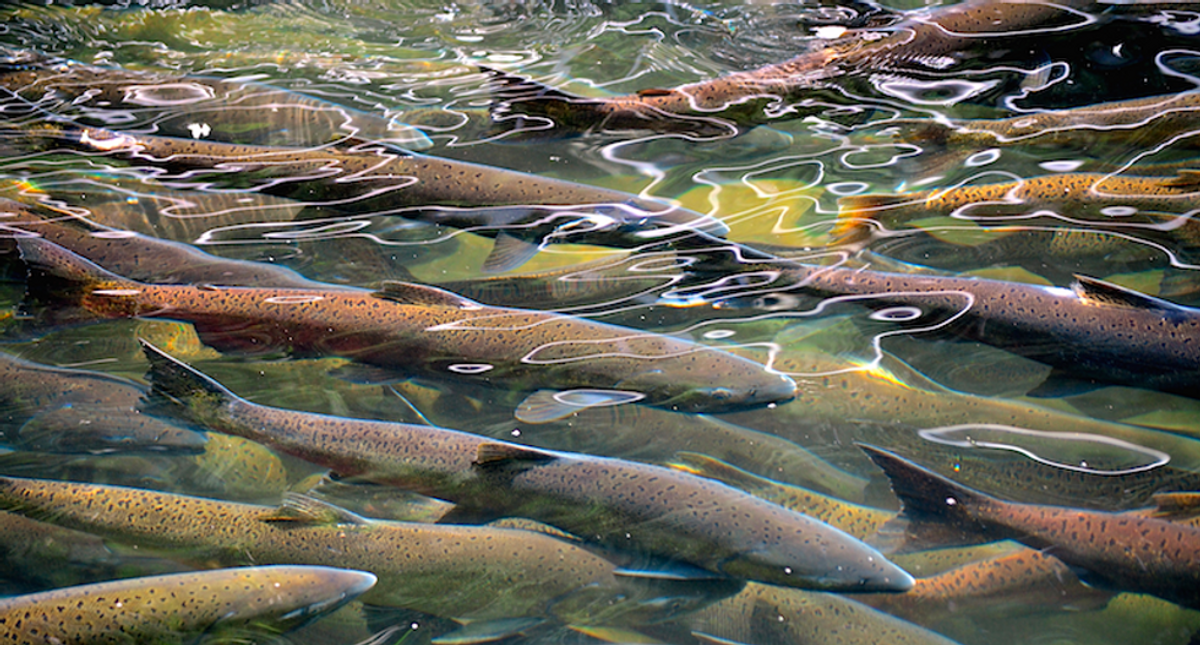 With chronic drought drying up rivers earlier than usual this year, California is scaling up a drastic operation to help its famous Chinook salmon reach the Pacific -- transporting the fry by road in dozens of large tanker trucks.

The tasty migratory fish are typically born in rivers, swim to the ocean where they reach maturity and can remain for several years, before returning to their native rivers to spawn and die.

But drought-hit rivers with too little flow or unusually warm water can fatally disrupt that cycle, causing California's fish and wildlife department to take "the proactive measure of trucking millions of hatchery-raised" juvenile salmon to the sea.

"Trucking young salmon to downstream release sites has proven to be one of the best ways to increase survival to the ocean during dry conditions," said northern California hatchery chief Jason Julienne in a recent statement.

While road transportation of salmon dates back to the 1980s, early drought conditions this summer mean authorities plan to boost the size of the operation by 20 percent.

Trucks bearing nearly 17 million young salmon will travel more than 30,000 miles (48,000 kilometers) between April and June, helping the fry avoid streams where many have perished in the past.

One beneficiary will be the Feather River Hatchery, just below a dam north of Sacramento, which produces around eight million salmon fry annually from fish that naturally return to the rivers in which they were born.

The hatchery was built in 1967 to compensate for the destruction of natural spawning sites above the Oroville Dam, with a "fish ladder" -- a narrow channel around a mile long with man-made steps -- simulating the rapids of a mountain stream.

"The fish will migrate up, because the instinct of the fish is to go upstream when they're ready to spawn," said Anna Kastner, head of the hatchery, on a recent visit by AFP.

On a day in late May, several dozen salmon were crowded at the top of the ladder, ready to be diverted into the hatchery basin where the powerful fish -- who can exceed 50 pounds (22.5 kilograms) in weight -- will be tranquilized for tagging and receive vitamin injections.

Later, salmon ready to spawn will be harvested, and some 20 million eggs placed in incubation trays at the hatchery. They'll make next year's journey back to the Pacific as fry.

According to Kastner, the entire artificial process means "survivability in the hatchery is much higher than the river," with around 85 percent of eggs able to produce fish that can be returned to downstream rivers or the sea near San Francisco and Monterey.

Already this summer California authorities have declared a drought emergency in more than 40 of California's 58 counties.

Conditions in Butte County, where the Oroville Dam is located, are classified as "exceptional" -- the highest category.

Exacerbated by climate change, conditions are likely to deteriorate until rainfall returns in five to six months.

"We want to make sure that we have the best available chance for this fish, because we don't know what's going to happen," said Kastner.