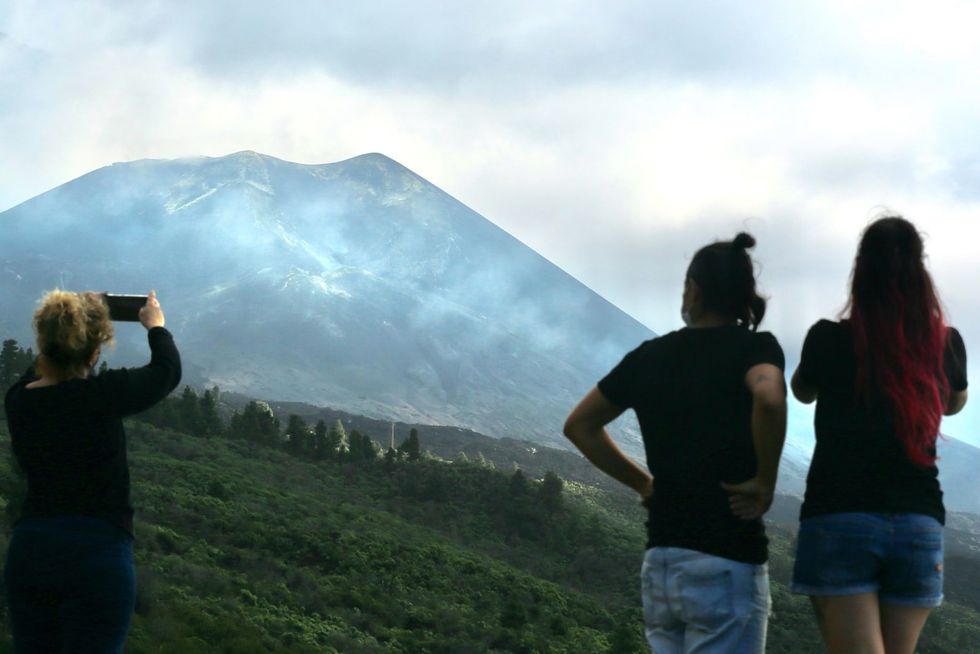 People look at the Cumbre Vieja volcano after the scientists declared the end of its eruption following more than three monts of activity. Cézaro De Luca/EUROPA PRESS/dpa

The residents of the Spanish island of La Palma received a Christmas present to remember on Saturday when the volcanic eruption that has unleashed rivers of lava for three months was finally declared over.

The volcano, which started erupting on the Atlantic island on September 19 after half a century of dormancy, suddenly went dormant again on the evening of December 13. There have been no fissure-style eruptions or major seismic activity since.

The local emergency committee Pevolca said on Saturday that because there had been a cessation of activity for more than 10 days, experts were confident that the volcano had once again fallen silent.

"All my appreciation to the people of La Palma," he tweeted. "We will continue working together, all the institutions, to relaunch the wonderful island of La Palma and repair the damage caused."

It will be a tall order: Although no lives were lost, more than 2,900 homes and other buildings were destroyed and nearly 1,200 hectares of the island were covered in a metre-thick layer of lava. The damage is estimated at more than 900 million euros (1 billion dollars).

Parts of the island look like a moonscape, with only the chimneys of buried houses sticking out of the ash in places. More than 7,000 people were forced to flee their homes to avoid the encroaching lava flows.

People returning to their homes were told to open their windows for at least 15 minutes to make sure any toxic gas that had accumulated could escape, state broadcaster RTVE reported.

And Pevolca spokesperson Miguel Angel Morcuende tempered the good news with a note of caution, stressing that the unnamed volcano remains unpredictable and could suddenly become active again in the future.

La Palma is the youngest of the Canary Islands, which, like the better-known islands of Tenerife and Gran Canaria, are all of volcanic origin.

For the people on La Palma, the westernmost of the islands, the eruption did not really come as a surprise. Increasingly frequent earthquakes in the years and months before the eruption had heralded the disaster.

"We knew this thing was going to blow eventually. Only we thought the volcano would erupt further south," recalled resident Kathrin Gouffran. On September 19, like thousands of her neighbours, she had to escape from her house in Todoque, which soon fell victim to the lava, as did almost the entire town.

But the 52-year-old German, who has lived on La Palma for 20 years, has no more thoughts of leaving the island than most of the other 85,000 inhabitants.

"Stronger than the volcano" was the motto repeated by people on the island throughout the crisis.

"I love the island and its people, who are so helpful that it totally overwhelmed me," said Gouffran.