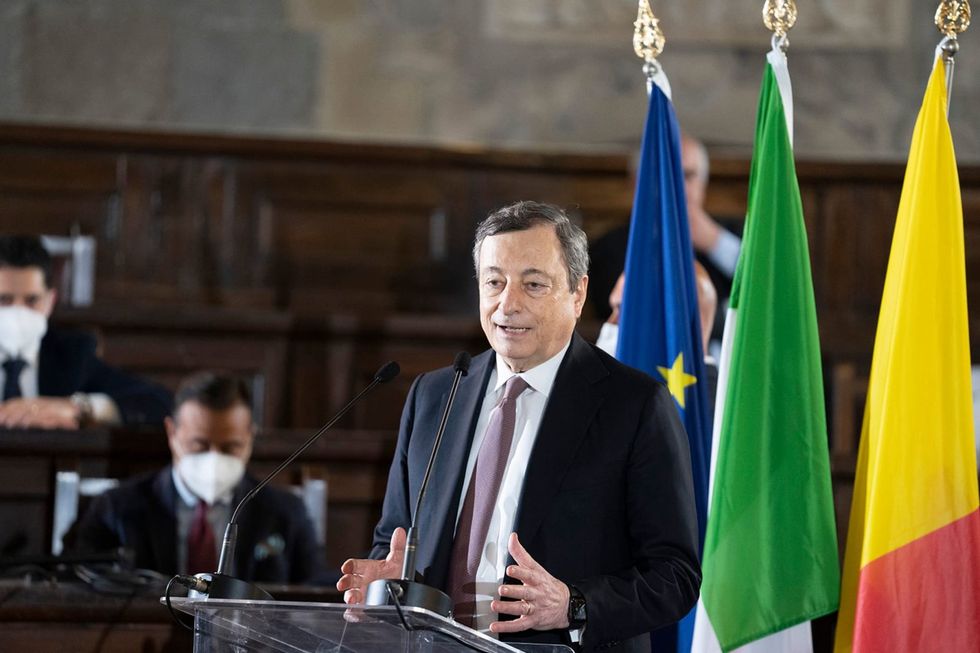 Italian Prime Minister Mario Draghi speaks at the signing of the Pact for Naples, a bailout agreement for the bridging of the deficit and the relaunch of investments. -/Italian Government/dpa

European governments made further efforts to accommodate people fleeing war in Ukraine on Tuesday, as Russia continues to attack its neighbour.

Overall, 3.8 million people have now fled the war in Ukraine, according to the UN Refugee Agency.

The Czech parliament approved an extension of the state of emergency until the end of May.

The Czech Republic is one of the countries to have received the highest number of refugees fleeing the conflict with 300,000 people arriving so far, some half of them children.

The Czech state of emergency was declared in early March by Prime Minister Petr Fiala, giving the government greater decision-making powers and allowing aid to be better coordinated.

Interior Minister Vit Rakusan said: "We all know that we will soon reach the limits of our capacities - and I say openly that we will then need help from other states."

Meanwhile, Italian Prime Minister Mario Draghi signed a decree granting Ukrainian refugees the right to remain in Italy for a year and to enter the work force, his official residence Palazzo Chigi announced.

In doing so, Draghi is ensuring the implementation of an EU directive from March 4. Refugees are now to receive a residence permit valid for a maximum of one year and will also have access to health services, the labour market, schools and universities.

In addition, refugees will be able to bring any remaining family members in Ukraine to Italy. According to figures released on Tuesday, the Ministry of the Interior has so far registered over 75,000 Ukrainian refugees upon arrival in Italy.

In France, a large ferry in the southern port city of Marseille is being hurriedly kitted out to serve as accommodation for 1,600 Ukrainian refugees, Le Parisien reported.

The Méditerranée, which is usually used for maritime traffic to Algeria, has 500 cabins that will accommodate mainly women and children, the report said.

The ferry was adapted in a hurry and, in addition to lessons for children and language courses for adults, will also offer job opportunities, a medical station and psychological support for refugees.

In addition to the municipality and aid organizations, local companies are also getting involved to integrate the new arrivals.