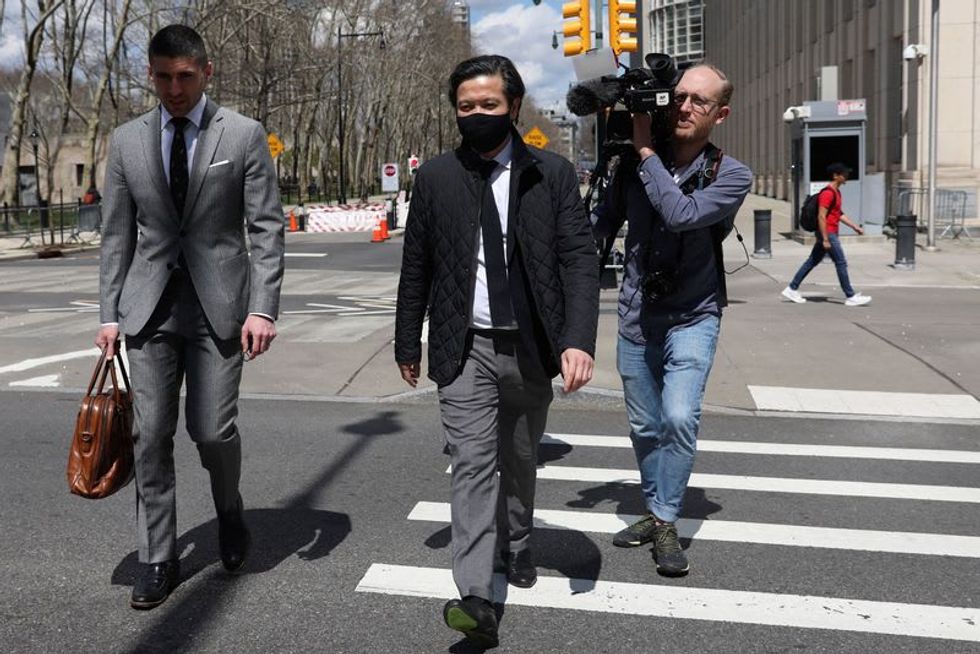 By Luc Cohen and Jody Godoy

NEW YORK(Reuters) -Former Goldman Sachs banker Roger Ng was convicted by a U.S. jury on Friday of corruption charges related to his role in helping loot hundreds of millions of dollars from Malaysia's 1MDB development fund.

The charges stemmed from one of the biggest financial scandals in history. Prosecutors charged Ng, Goldman's former top investment banker for Malaysia, for conspiring to violate an anti-corruption law and launder money.

They said he helped his former boss Tim Leissner embezzle money from the fund, launder the proceeds and bribe officials to win business for Goldman.

Ng, 49, had pleaded not guilty to the charges. His lawyers say Leissner, who pleaded guilty to similar charges in 2018 and agreed to cooperate with prosecutors' investigation, falsely implicated Ng in the hopes of receiving a lenient sentence.

The fund was founded to pursue development projects in the Southeast Asian country.

The jury convicted Ng of two counts of conspiracy to violate the Foreign Corrupt Practices Act (FCPA) through bribery and circumvention of Goldman's internal accounting controls, as well as one count of conspiracy to commit money laundering.

Ng, wearing a black suit jacket and black tie, showed little emotion as the jury's foreperson read out the verdict. Ng glanced back and forth between the jury and the desk he was seated at. His lawyer, Marc Agnifilo, hung his head after the guilty verdict to the first count was read.

U.S. District Judge Margo Brodie, who is overseeing the case, ordered that Ng be subject to a curfew pending sentencing, but said she did not consider him a flight risk.

Deliberations began on Tuesday after a nearly two-month trial in federal court in Brooklyn.

Agnifilo said Ng may appeal, depending on the outcome of his post-trial motions and his sentence. He stood by his decision to convince Ng to waive extradition to face trial, saying he had a better chance of a fair trial in the United States than in Malaysia.

"These big cases are tough and they're hard to win," Agnifilo told reporters.

Prosecutors have said Goldman helped 1MDB raise $6.5 billion through three bond sales, but that $4.5 billion was diverted to government officials, bankers and their associates through bribes and kickbacks between 2009 and 2015.

Ng is the first, and likely only, person to face trial in the United States over the scheme. Goldman in 2020 paid a nearly $3 billion fine and its Malaysian unit agreed to plead guilty.

Jurors heard nine days of testimony from Leissner, who said he sent Ng $35 million in kickbacks. Leissner said the men agreed to tell banks a "cover story" that the money was from a legitimate business venture between their wives.

Ng's wife, Hwee Bin Lim, later testified for the defense that the business venture was, in fact, legitimate. She said she invested $6 million in the mid-2000s in a Chinese company owned by the family of Leissner's then-wife, Judy Chan, and that the $35 million was her return on that investment.

Agnifilo said in his closing argument on Monday that Leissner could not be trusted. Alixandra Smith, a prosecutor, said in her summation that Leissner's testimony was backed up by other evidence.

Jho Low, a Malaysian financier and suspected mastermind of the scheme, was indicted alongside Ng in 2018 but remains at large.