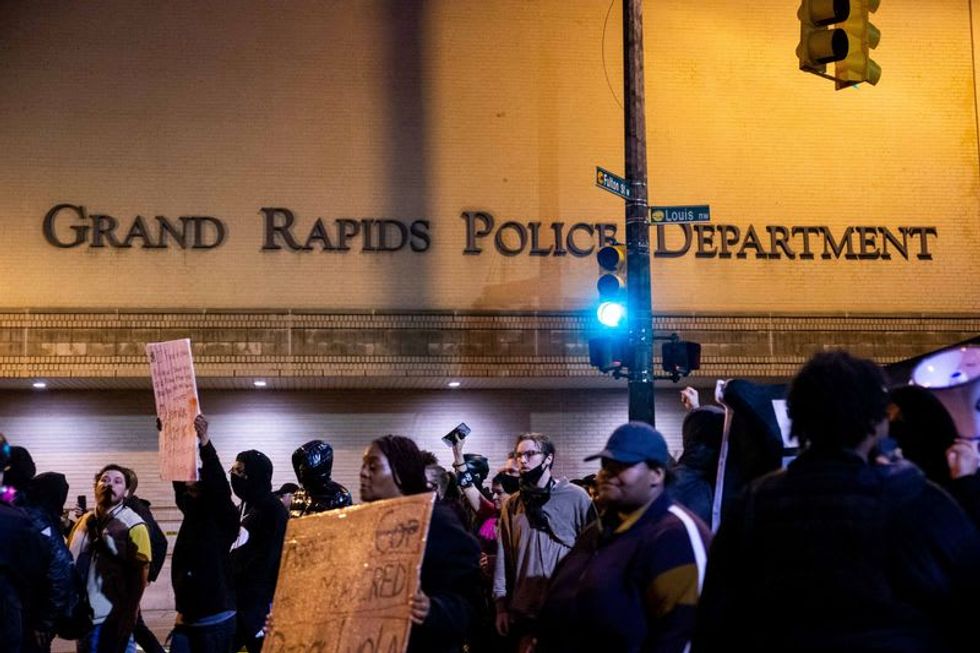 (Reuters) - The family of an African refugee killed by a Michigan police officer during a traffic stop demanded on Thursday that authorities dismiss the officer from the force and file criminal charges against him, a day after a video of the fatal shooting was released.

Patrick Lyoya, a 26-year-old Congolese refugee who is Black, was killed in a Grand Rapids neighborhood during a routine traffic stop after he struggled with the officer over a stun gun. The officer has not been publicly identified.

Speaking through a translator at a press conference on Thursday, Lyoya's parents mourned the loss of their first-born son, saying they did not believe that this could happen in the United States.

"My heart is broken to see an officer being on top of my son and to shoot him in the back of his head, my heart is really broken," said Peter Lyoya, his father. "I'm asking for justice for Patrick."

The family fled violence in the Democratic Republic of Congo for the United States in 2014, according a statement from the governor's office.

Ben Crump, a prominent U.S. civil rights attorney who is representing the family, said the officer did not follow basic training protocols and that the use of fatal force was unnecessary and unjustifiable.

"Another senseless killing of a Black person in America by the very people who are supposed to protect them," he said referring to the video footage. "You see a police officer escalate a minor traffic stop into a deadly execution."

Crump again called for federal police reform, noting that Lyoya's death is one in a growing list of police killings of racial minorities, including that of George Floyd and Breonna Taylor, in situations that could have been de-escalated.

Tamika Palmer, Taylor's mother, was present at the news conference in Grand Rapids.

After the release of the videos, hundreds of demonstrators gathered to protest the shooting, call for accountability and demand police reform, the Detroit Free Press reported.

Lyoya, who was driving with a front seat passenger on April 4, was pulled over after the officer ran the car's license plate and discovered it did not match the vehicle.

He exited the vehicle and the officer sought to detain him. A short foot chase followed and ended on the lawn of a home where Lyoya attempted to block the officer from using his Taser, video footage shows.

The two had fell to the ground when the officer drew his firearm and fired one shot in the back of his head, video footage shows.

The officer, who has not been charged, is on paid leave and under investigation by the Michigan State Police.

Kent County prosecutors told CNN on Wednesday that a decision about criminal charges would be made after the investigation has concluded.