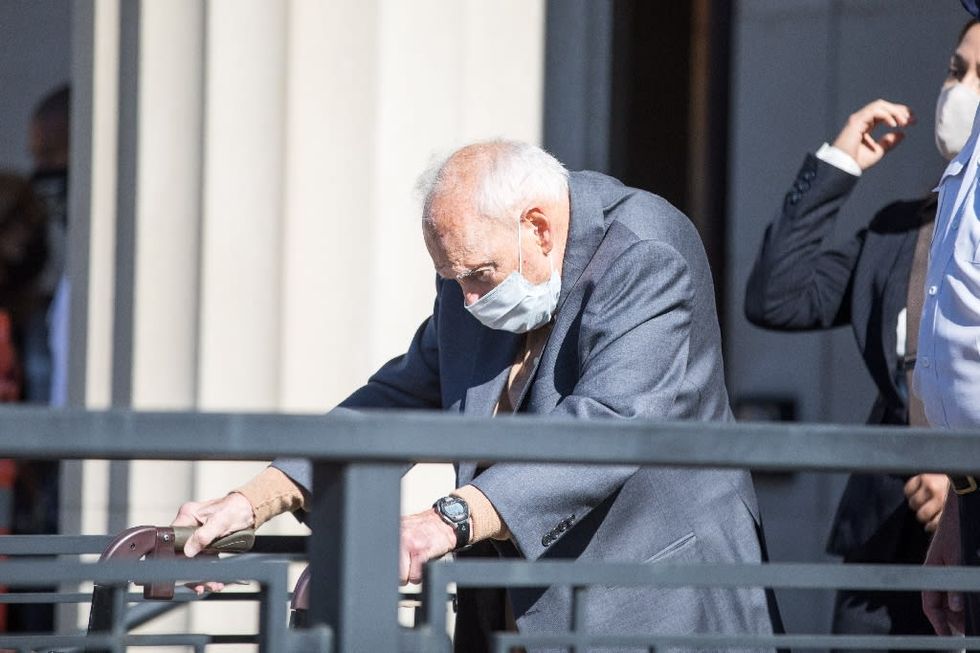 Former Cardinal Theodore McCarrick leaves the Dedham courthouse after pleading not guilty during his first appearance for sexual assault charges on on September 3, 2021

New York (AFP) - Former US cardinal Theodore McCarrick, the most senior Roman Catholic official in America to face criminal charges in the massive clergy abuse scandal, pleaded not guilty Friday to charges that he sexually assaulted a teenage boy.

McCarrick, 91, arrived at Massachusetts District Court in the town of Dedham walking hunched over with the aid of a walker, amid some boos, video shared on social media showed.

McCarrick's attorney, Barry Coburn, confirmed that he pleaded not guilty. Coburn said he had no further comment.

"Today, history is being made. History that will not be forgotten," the victim's attorney Mitchell Garabedian said in a statement sent to AFP.

"The trailblazing complainant is sending a direct message to the Catholic Church that its reign of sexual abuse by Bishops and Cardinals is going to be confronted head on."

The former archbishop of Washington DC was charged in July with three counts of indecent assault and battery against a child over 14.

McCarrick was thrown out of the Catholic Church in 2019, becoming the highest-ranking Church figure to be expelled in modern times.

He had been found guilty by the Vatican of sexually abusing at least one teenage boy in the 1970s and of sexual misconduct with adult male seminarians.

Prosecutors in this case allege that McCarrick groped a 16 year old boy in 1974 as they walked around the campus of Wellesley College in Massachusetts during the boy's brother's wedding reception.

The victim says that McCarrick led him into a room and groped his genitals while "saying prayers," according to the criminal complaint.

McCarrick left the courthouse on Friday after posting $5,000 bail, according to court papers seen by AFP.

The ex-cardinal has been the subject of several civil lawsuits brought by accusers but this is the first criminal case against him.

The Catholic Church has been shaken by a string of child sex abuse scandals in recent years.

A grand jury investigation into Pennsylvania dioceses in 2018 exposed the systematic cover-up by the Church of sexual abuse by "over 300 predator priests".

More than 1,000 child victims were cited.

Between 1950 and 2016 the US Catholic Church received 18,500 complaints against 6,700 members of the clergy, according to the site bishop-accountability.org.

Several senior church members in the US have been forced to resign for protecting sex offender priests, including the late cardinal Bernard Law.