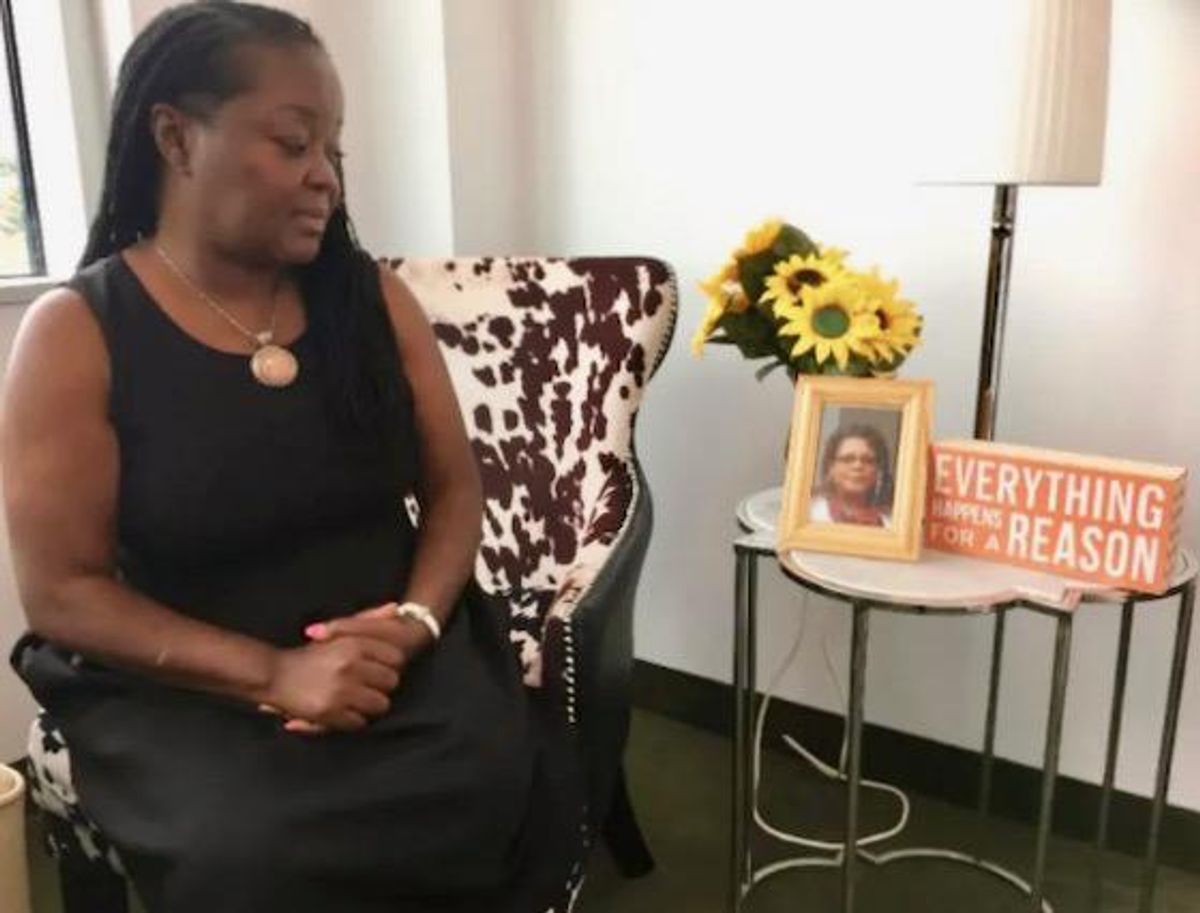 Dedra Spears Johnson, Heart to Hand Inc. executive director and co-founder, sits in her office in a Washington suburb looking at a picture of co-founder Sally Joseph, who died from cancer in 2009 (AFP)

Dedra Spears Johnson was working as a social worker in a suburb of the US capital Washington at the height of the HIV/AIDS epidemic in the 1990s, when she concluded Black women's needs weren't being met by efforts to fight the disease.

Highly effective medications had recently been approved, but the people around her were hitting economic barriers and cultural taboos that prevented access.

"There's a shame about feeling they have this dirty disease," Spears Johnson -- who in 1999 co-founded a nonprofit group called Heart to Hand Inc to broaden access to testing, treatments and education -- told AFP.

"In our community, we don't talk about sex."

Forty years after US scientists documented the first cases of what would later be identified as HIV, life-saving medications have brought infection rates crashing down -- but racial disparities are now wider than ever.

Black Americans went from making up 29 percent of new infections in 1981 to 41 percent in 2019, despite accounting for only 13 percent of the US population, according to a new government report.

Part of the problem stems from the fragmented nature of the country's health care system.

Tens of millions are either uninsured or underinsured, or reliant on government insurance for those with low incomes called Medicaid.

On a recent visit by AFP, Heart to Hand was inundated with calls.

One of the callers, the receptionist told Spears Johnson, wanted to know whether Medicaid would cover treatment.

Spears Johnson said it wouldn't, but they would find another way.

Two were dead by the time of publication and the rest would soon follow, marking the start of the AIDS crisis. Today, there are an estimated 1.2 million Americans living with HIV.

"When I first started seeing patients with HIV, it was largely a death sentence for the infected person," Johns Hopkins University medical professor Charles Flexner, who was a medical student at the time, told AFP.

The epidemic peaked in the mid-1980s, but in 1987 the Food and Drug Administration (FDA) approved the first antiretroviral drug azidothymidine (AZT), offering a ray of hope.

Its toxicity and propensity to cause anemia however proved too much for some patients, particularly those already weakened by the disease.

More effective treatments called tri-therapies came along in 1995 and 1996, but a patient had to take 12-16 pills a day, which often made them sick.

"Ann," a Black woman who was infected in 1997 by an ex-husband who later died from AIDS, said the pills were also difficult to hide.

"Some had to be refrigerated," said Ann, who declined to give her real name, fearing rejection from family and friends she loves to cook for.

"But I didn't want anyone to see it in my fridge. So I would keep it in a cool drawer."

The emotional and physical tolls endured by patients would pay off when in 1996, AIDS-related deaths declined for the first time in the United States.

The FDA's approval in 2012 of a pill called PrEP, or pre-exposure prophylaxis, led to further dramatic reductions.

This medicine, taken once a day, reduces the risk of getting HIV by about 99 percent.

But again, racial disparities are glaring.

Only 23 percent of people who could benefit from it were using it in 2019. This included 63 percent of white people, but only 14 percent of Hispanics and eight percent of Black people.

One of the most at-risk groups is gay Black men, and studies have shown this is not because they engage in more risk-associated behaviors but rather that HIV is already much more prevalent in the demographic.

Beyond this, a "lack of resources and historic underfunding has plagued Black gay communities," said a 2015 report by amFAR, the Foundation for AIDS Research.

David Wilson, a 33-year-old Black gay man who is HIV-negative, told AFP he decided to start PrEP after finding out his partner "stepped out" -- had sex with someone else -- and became infected.

"I'm completely realistic with my sexual practices and the things I like to do," Wilson said. "That's why I decided to get on PrEP."

Wilson is being treated at Whitman-Walker, a sexual health clinic in downtown Washington started by gay men in the 1970s, which found itself poised to recognize the beginnings of the HIV epidemic in the 1980s.

Former Whitman-Walker board director SaVanna Wanzer, a Black transgender woman activist, became one of the infected in 1985.

"AIDS was classified as a gay man's disease, and they treated you like you were the lowest specimen in the world," Wanzer said.

Few knew how the disease was transmitted at the time, and Wanzer described patients being left alone in isolated rooms to die with "all their lunch trays stacked up in front of the door."

Back then, one of Whitman-Walker's goals was to help patients to die with dignity.

Today, they offer a streamlined system for affordable access to HIV prevention and care. Uninsured patients are connected to "Insurance Navigators" with the goal of getting a same-day prescription.

Sometimes, helping people get the care they need can be straightforward as providing assistance like child care or transportation, explained Spears Johnson.

"We look at structural barriers to health care," she said. "And we don't give up on anybody."