In troubled France, no honeymoon for re-elected Macron: analysis 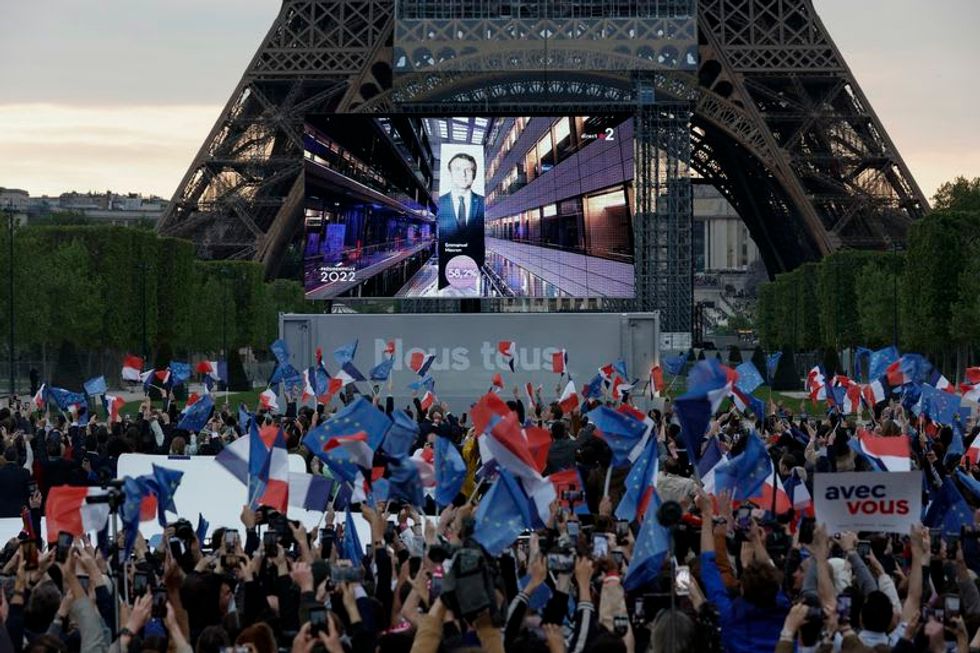 Emmanuel Macron may have seen off far-right leader Marine Le Pen, but his second term could be even rockier than the first with mounting political opposition and boiling social discontent.

As supporters savoured a hard-won victory at a rally by the Eiffel Tower on Sunday, his lieutenants were already going around TV studios and acknowledging that Le Pen's unprecedentedly high score -- as much as 42% according to estimates -- meant Macron will have to draw lessons from it.

"With the far-right at 40%, it shows we've got more work to do," Clement Beaune, Macron's close confident and European affairs minister said on France 2 television. His health minister, Olivier Veran, said a "change of method" was needed, with more consultation.

The next hurdle is only a few weeks ahead. Parliamentary elections in June will define the make-up of the government Macron must rely on to see through reform plans that would be an unprecedented shake-up of France's welfare state.

Newly elected presidents can usually expect to get a majority in parliament whenever legislative elections directly follow the presidential vote because of the generally low turnout among supporters of all the defeated candidates.

However, in her concession speech, Le Pen sounded defiant, promising a strong opposition bloc in parliament. Hard-left Jean-Luc Melenchon has his mind set on becoming prime minister after securing the bulk of the left-wing vote in the first round.

Melenchon hopes to carry that momentum into the parliamentary elections and force Macron into an awkward and stalemate-prone "cohabitation" with him in charge of a left-wing majority.

Even if Macron allies do get a majority or a workable coalition pact, he will also have to deal with resistance in the streets to his reform plans, notably a pension reform that would gradually raise the minimum age to 65 from 62.

Pensions are always a hot issue in France and Macron's lower score against Le Pen compared to 2017 means he won't have the same authority to implement reforms he had five years ago, despite becoming the only French president to be re-elected in two decades.

"His election is a choice by default. He risks being a lame duck faced with major social discontent if he wants to implement sensitive reforms such as for pensions," Christopher Dembik, an economist for Saxo Bank, told Reuters.

In a possible sign of the trouble ahead, he was repeatedly admonished by angry voters about the pension reform on the campaign trail, forcing him to concede a possible cap at 64.

Philippe Martinez, the head of the Communist-backed CGT union, one of the biggest in France, has already warned Macron that there would be "no honeymoon" for him and he could expect demonstrations if he did not back down entirely.

Another volatile issue to deal with in the immediate aftermath of the election will be skyrocketing energy prices.

Macron's government has capped electricity prices and offered discounts on prices at the pump until after the election. He said during the campaign he would shield voters for as long as necessary, but offered no clear timeline.

What is clear is that the costly measures will have to be lifted at some point. Meanwhile, lawmakers say constituents are already complaining about the soaring price of all sorts of staples, such as Ukraine-made sunflower oil or rice and bread.

In 2018, rising pump prices triggered France's worst social unrest since the 1968 students revolts with the "yellow vest" rebellion that caused months of disruption in Paris and roundabouts across France.

Macron will therefore have to tread carefully if he doesn't want the tinderbox to explode again.

His first term has been littered with PR gaffes that made him come across as arrogant or patronising. Many French detest him: one man on the campaign trail told him to his face he was "the worst president of the Fifth Republic"

Political allies warn he will need to consult lawmakers, unions and civil society more and do away with the top-down governing style of his first term which he himself loftily described as "Jupiterian".

"Emmanuel Macron got the message: you can't decide about everything from on high, he's not the head of a company," lawmaker Patrick Vignal told Reuters. "He needs to accept this idea of negotiation, consultation."

Putin is 'out of options' and Russian military realizes it 'picked up a fight with NATO in the wrong place': expert

In an interview with The New Yorker published this Wednesday, Russian investigative journalist Andrei Soldatov discussed Russia's setbacks in its invasion of Ukraine, saying that it's clear that the Russian government "now understands that it’s going to be a long, conventional war, not the small military operation they pretended it would be."

According to Soldatov, Russian President Vladimir Putin is "out of options."