George P. Bush’s family name proves to be key obstacle in his race against Ken Paxton for attorney general

James Barragãn, The Texas Tribune
George P. Bush speaking at the Republican Leadership Conference in New Orleans, Louisiana (Gage Skidmore/Flickr)
As George P. Bush was ramping up his runoff campaign in the Republican attorney general’s race in March, he jumped on a Fox Business Network interview to advocate for stricter border security, pledging to build “miles and miles” of border wall to combat the federal government’s “inactivity.”

Stuart Varney, the host conducting the interview, was skeptical.

“Sir, I always think of the Bush family as kind of the moderate wing of the Republican Party,” he said. “And now you want to finish Trump’s wall. Is that accurate?”

The interaction is emblematic of a key obstacle for Bush in his race against two-term incumbent Ken Paxton: his family name.

To win the Republican runoff — an election decided by the party faithful — Bush has to convince GOP voters that his conservative bona fides are unimpeachable. In recent years, he’s embraced the rhetoric of the more Trumpian faction of the party. He wants to build the border wall. He supports the state’s latest efforts to investigate the parents of transgender children for child abuse. He has said he wants his generation to be the one that ends abortion. He opposes same-sex marriage.

But despite his rightward shift, Bush has not broken through against Paxton — the most vulnerable Republican incumbent in statewide office who faces multiple scandals, including a seven-year-old indictment for securities fraud, an FBI investigation into allegations of malfeasance, accusations of cheating on his wife and a lawsuit by the state bar challenging his ethics as a practicing attorney. Paxton has denied any criminal wrongdoing.

Bush’s struggles highlight how politics in Texas have changed. For decades, the Bush family was GOP royalty. Bush’s grandfather, George H.W. Bush, first won office here in the ’60s. His uncle, George W. Bush, was an immensely popular governor. Both presidential Bushes have their libraries in the state.

But now, his ubiquitous name recognition is emerging as a liability in the Republican party. George P. Bush, who currently serves as the state’s land commissioner, is trailing Paxton in polls. Some of the top reasons Republican voters are reluctant about him are his ties to his family’s center-right political leanings and his own past policy positions. 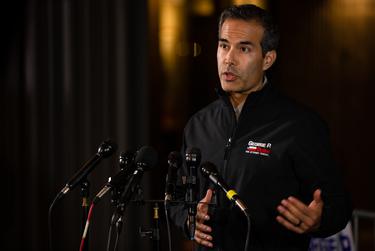 Bush said those attacks are led by Paxton and don’t reflect the support he has seen on the campaign trail. The sitting attorney general’s ads against Bush focus on labeling him a RINO — Republican in name only — and linking him to his famous family.

Bush responded briefly to the attacks in a new ad released Thursday.

“I’m proud of my family’s contributions to Texas and America. But this race isn’t about my last name,” he said in the ad. “It’s about Ken Paxton’s crimes.”

In an interview, he told The Texas Tribune that he’s confident that he’s resonating with conservative voters.

“[Paxton’s] argument falls into fears because he’s not out there talking to Republicans,” Bush said. “[Voters] know that my record at the land office has been nothing but conservative.”

“There’s the question about believability,” said Cal Jillson, a political scientist at Southern Methodist University. “People might hear those words coming out of George P.’s mouth but they don’t believe it.”

Bush, a fourth-generation politician, is related to two presidents and is the son of former Florida Gov. Jeb Bush.

His family name is synonymous with the center-right, pro-business faction of the GOP that dominated the party for the last four decades. They prioritized increased spending on national security, decreasing the size of government and deregulating business. They tried to work across the political aisle and expand the GOP’s appeal to people of color. During their stints in the White House, Bush’s grandfather raised taxes on the American public, and his uncle advocated for a legal path to citizenship for undocumented immigrants working in the country. 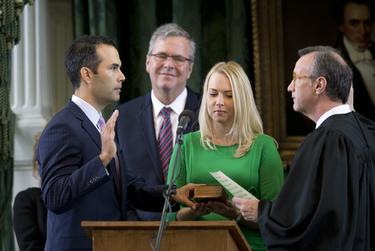 George P. Bush is sworn in as Texas land commissioner on Jan. 2, 2015 as his father Jeb and wife Amanda look on. Credit: Bob Daemmrich 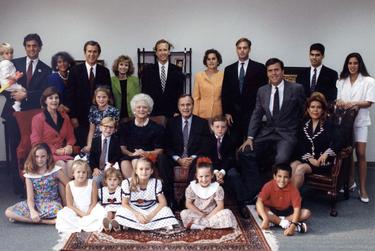 First: George P. Bush is sworn in as Texas land commissioner on Jan. 2, 2015 as his father Jeb and wife Amanda look on. Last: Bush family portrait in Houston in 1992. Credit: Bob Daemmrich for The Texas Tribune; REUTERS.

In recent years, however, grassroots Republican voters have turned their back on the political dynasty and derided them for being disconnected with the wishes of social conservatives, who want to push harder to ban abortion, limit the expansion of transgender rights and crack down on illegal immigration. Those voters found their candidate in former President Donald Trump, who ran against Bush’s father, Jeb, and constantly attacked him during the 2016 presidential campaign.

In 2020, Bush’s cousin, Pierce Bush, finished third in the GOP primary for a Houston congressional seat.

Most members of the Bush family refused to support Trump in either of his presidential campaigns. But George P. Bush, the only member of the family still in office, backed him both times.

He also courted Trump’s endorsement in the attorney general race, even handing out campaign koozies with a cartoon picture of Trump and a quote from the former president: “This is the only Bush that likes me. This is the Bush that got it right. I like him.”

But Trump endorsed Paxton early on, taking away any possible upswing for Bush with Trump supporters.

Bush has presented himself as steadfastly socially conservative. But his demeanor is more in line with his family’s genteel approach to politics — more likely to work in collaboration with others than get in their face.

When he first took over as the state’s land commissioner in 2015, he avoided negative press and did not harp on controversial social issues — appealing throughout his campaigns to disaffected Democrats and independents. He focused on wonky topics like water rights, making sure endangered species protections didn’t interfere with business interests and creating his sprawling agency’s first online oil and gas auctions. One of his first major moves was to cut down the size of the agency’s staff.

As his profile grew, Bush, whose mother is from Mexico, gained a reputation for courting diversity in the GOP and calling out members of the party who made racist comments. 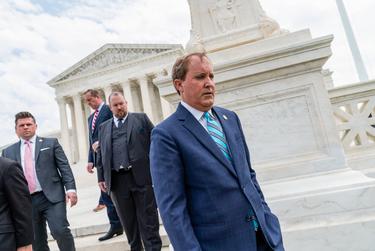 By contrast, his opponent Paxton is the consummate social conservative. Upon being elected attorney general the same year Bush took over the land office, Paxton quickly made a name for himself by suing the federal government over immigration and going on the attack against gay marriage and abortion providers in the state.

He became a regular on Fox News and led the lawsuits that ended Obama-era policies like the expanded deferred action programs that would have protected the undocumented immigrant parents of some children born in the United States.

Bush has tried to shift to the right in recent years, appearing more often on Fox News to attack the Biden administration’s immigration policies.

But Republican voters like Christin Bentley, founder and president of the conservative Texas Freedom Coalition, are not convinced.

Bentley, who has endorsed Paxton, said she wants a “fighter” who will push back against the “cultural marxism” she says liberals have infused into today’s politics.

“What drives me crazy about people like George P. Bush and the establishment is that they just want to focus on slogans like ‘Keep Texas red’ and they don’t seem to understand that in order to do that we have to really fight hard,” she said. “Right now, we need people who are not afraid of controversy and be very aggressive in protecting the rights of Texans and not politically correct kind of people.”

Bush acknowledged he may not be as combative as Paxton, but said he would fight for the same issues and would do so without a cloud of legal troubles hanging over his head and the attorney general’s office. He said voters have told him they are worried Republicans could lose the attorney general’s seat if Paxton’s legal troubles escalate and he is forced out of office.

“It’s kind of ‘what you see is what you get,’” Bush said. “I’m a steady hand. Maybe not the most exciting candidate, but I’m gonna get the job done.”

But Bentley’s not convinced. She also opposes Bush because of his office’s management of the redevelopment of the Alamo.

To her, Bush’s push to relocate the Alamo’s cenotaph, a monument meant as an empty tomb for Texas revolutionaries who died in the battle, was “unforgivable” because it would be less prominent. Bush has said that the monument needed to be moved in order to preserve it because it was falling apart from within.

Paxton is fueling that flame. On Tuesday, his first TV ad of the runoff campaign blasted “liberal land commissioner” Bush for his Alamo redevelopment plans, saying he had proposed a “woke plan” to move the cenotaph.

He’s also reminding voters of Bush’s past policy positions that are out of step with the runoff electorate through a website called GeorgePBushFacts.com. There, he decries Bush as a “RINO establishment darling who has sold out Texas.”

At the 2014 Texas Tribune Festival, Bush expressed support for the Texas Dream Act, a 2001 law that granted in-state tuition to undocumented immigrants who were brought to the country as children, calling the costs to the state “nominal.”

“Until there’s a sensible alternative that is being presented by anybody else, have at it,” Bush said at the time. 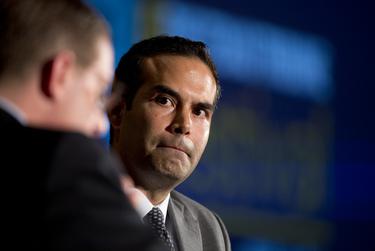 Now, Bush says he supports the Republican Party of Texas’ platform to repeal the law and has made border security a priority for his campaign. But Paxton’s camp is attacking him for his change of tune.

Paxton is also twisting the knife by touting his Trump endorsement in billboards that depict Trump and Paxton on one side and Bush and his father on the other, with the caption: “Choose a side.”

Jason Villalba, chair of the Texas Hispanic Policy Foundation, said the juxtaposition of Trump versus the Bush dynasty encapsulates the battle Bush is fighting in the race.

“The compassionate conservatism that George W. Bush embodied when he was governor is no longer that something that people that vote in Republican primaries are looking for,” he said. “That’s not popular today. What’s popular is the far-right, strident wing of Trump in the Republican party. And that’s not him.”

Disclosure: Southern Methodist University has been a financial supporter of The Texas Tribune, a nonprofit, nonpartisan news organization that is funded in part by donations from members, foundations and corporate sponsors. Financial supporters play no role in the Tribune's journalism. Find a complete list of them here.

This article originally appeared in The Texas Tribune at https://www.texastribune.org/2022/05/12/george-p-bush-ken-paxton-texas/.