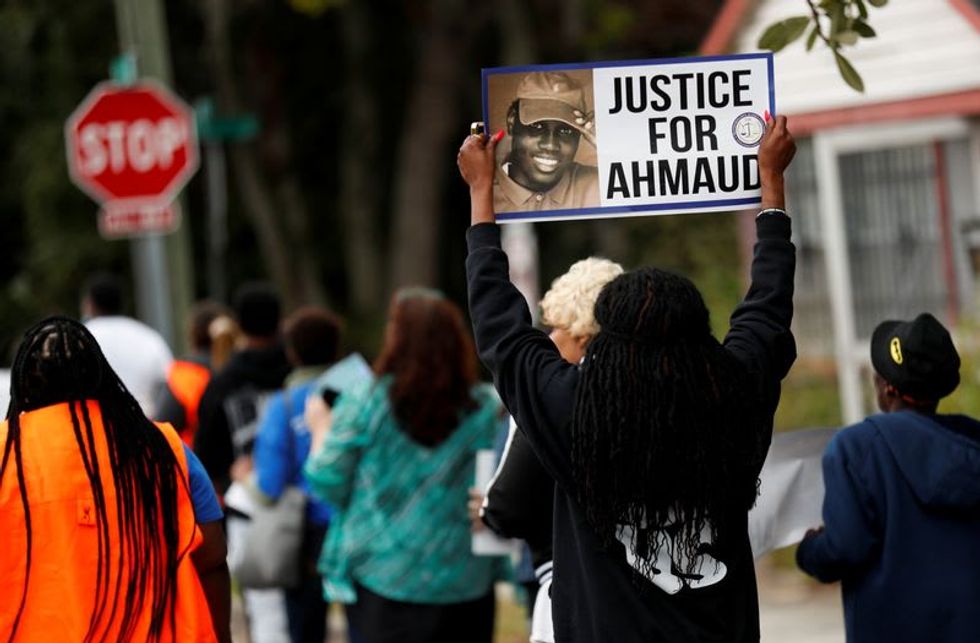 BRUNSWICK, Ga. (Reuters) - Jurors saw gory police photographs of the body of Ahmaud Arbery, a Black man, lying in the street of a southern Georgia neighborhood and the shotgun that killed him as the murder trial of three white men who chased and shot him resumed on Monday.

Gregory McMichael, 65; his son Travis McMichael, 35; and their neighbor William "Roddie" Bryan, 52, have pleaded not guilty to charges of murder, aggravated assault and false imprisonment. They face life in prison if convicted on the most serious charge by the jury, which is composed of 11 white people and one Black person.

The men say they thought Arbery might have been fleeing from a crime when he ran through Satilla Shores, their mostly white neighborhood, on a Sunday afternoon in February 2020. They pursued him in pickup trucks for several minutes before the younger McMichael confronted Arbery on the road.

Here are some important moments from the second day of witness testimony in Glynn County Superior Court:

Ramos was one of the first investigators to arrive at the scene of the shooting, and took dozens of crime-scene photographs that show Arbery's body in the middle of the road under a bloodstained white sheet.

Her photographs also showed Travis McMichael's pump-action 12-gauge shotgun lying on grass near the body, as well as shotgun shells and bloodstains on the asphalt.

The three defendants watched the jury look at photographs taken after the sheet had been removed from Arbery's body, with Bryan taking notes in a yellow legal pad. Some jurors appeared to squirm.

The photographs included close-ups of a gaping gunshot wound in the center of Arbery's chest, another just below his left armpit, and one on his wrist. Arbery's mother, Wanda Cooper Jones, looked on from the courtroom's gallery.

Travis McMichael's shotgun, contained in a long box, was also brought into the courtroom and admitted into evidence.