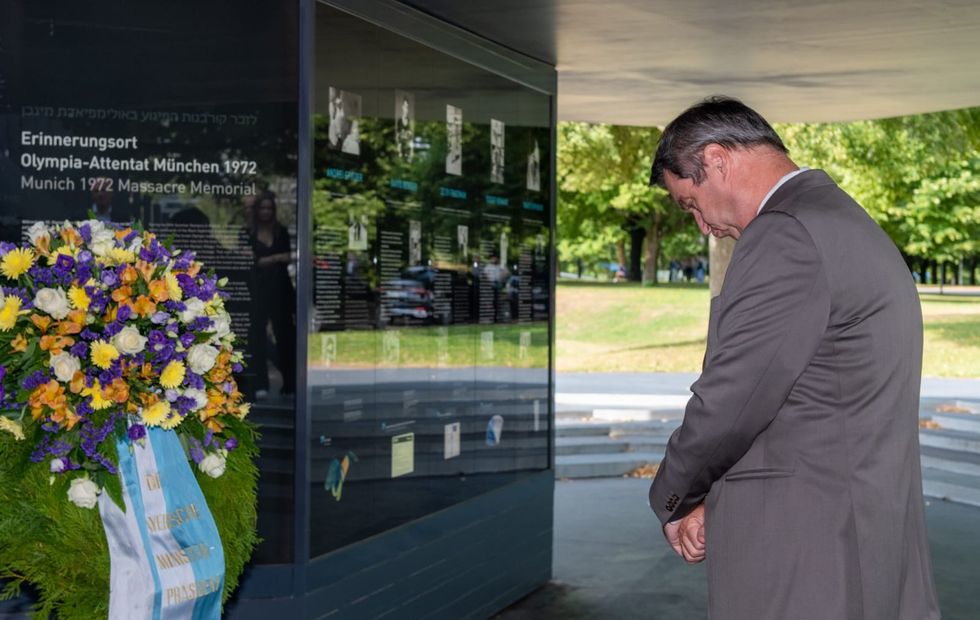 Markus Soeder, Minister-President of Bavaria, lays a wreath during a commemoration ceremony marking the 50th anniversary of the 1972 Summer Olympic Games at the memorial site for the assassination. 11 Israeli athletes were killed by Palestinian gunmen in 1972. Stefan Puchner/dpa-Pool/dpa

The German government announced plans on Wednesday to offer compensation to the families of the victims of the 1972 Olympics Munich Massacre.

A spokesperson for the Interior Ministry confirmed media reports that had suggested such an offer was in the works, adding that talks are being conducted in private with representatives of the victims' families.

The "serious consequences for the bereaved, both in an immaterial and in a material sense," are being reconsidered, the spokesperson said.

The 50-year anniversary of the massacre, in which a Palestinian terrorist group killed 10 Israeli athletes and coaches as well as one German police officer, is coming up on September 5.

The German government made payments to the victims of 4.19 million marks (roughly $2 million) shortly after the attack.

A further €3 million ($3 million) was paid to the bereaved in 2002 as a humanitarian gesture given Germany's special relationship with Israel, the government said at the time.

However, victims' families had unsuccessfully sued the German government for a much higher sum in 1994, citing huge mistakes by the police.

A representative for the bereaved, Ankie Spitzer, declined an invitation to a remembrance event on Tuesday, prompting Bavaria's anti-Semitism authority, Ludwig Spaenle, to call the event off.

Spaenle told dpa that it was the German government's duty to accept responsibility for its failings in the event and compensate survivors and victims' families appropriately.

In addition to compensation payments, the Interior Ministry announced it would form a commission of German and Israeli historians to examine and re-evaluate the events of 1972.