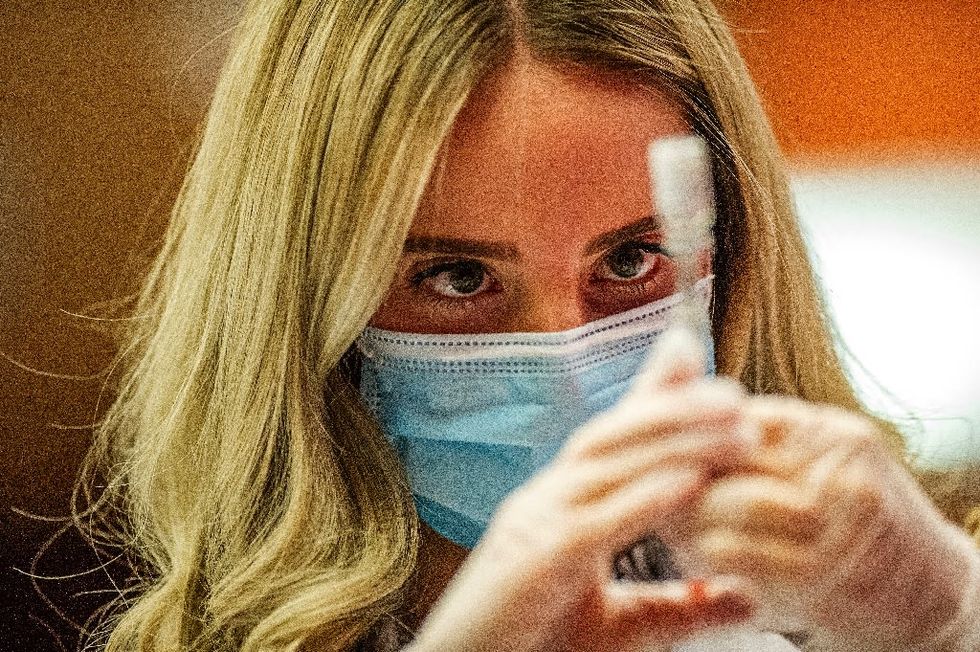 Merkel and Germany's 16 regional leaders revealed a step-by-step plan to relax restrictions, despite concern over the spread of more aggressive virus variants, as Merkel caved to political pressure and public discontent.

"Today, we can talk of hope and a transition to a new phase" in the fight against the pandemic, she told a Berlin press conference, citing the imminent ramp-up in vaccinations and the arrival of mass rapid testing.

The relaxations will happen gradually and many of the current virus restrictions will stay in place until March 28, but from Monday, Germans will be allowed to socialize more, with up to five adults from two households allowed to meet up.

The desire to leave pandemic regulations behind is widespread throughout the rest of Europe too, as the Swiss government said a referendum would be held in June on the legality of government powers to order lockdowns.

In the Dutch town of Bovenkarspel, a suspected bomb went off at a coronavirus testing center, breaking windows but not causing any injuries.

The Netherlands has been shaken by riots against coronavirus curfews and the torching of another testing center in January.

Biden is touting a surge in vaccine production in the United States and says that by May, there will be enough supply for everyone in the country -- although it could take months more for the whole population actually to receive the jabs.

As US states Texas and Mississippi defy federal guidelines and ditch mask requirements, Biden told reporters at the White House that this is no time to relax, despite declining case counts. More than half a million Americans have died from the coronavirus, and the toll ticks upward daily.

"The last thing we need is Neanderthal thinking that in the meantime, everything's fine -- take off your mask, forget it. It still matters."

Rochelle Walensky, the director of the Centers for Disease Control and Prevention (CDC), echoed the warning, and said, "The next month or two is really pivotal in terms of how this pandemic goes."

Increasingly, the now year-long global pandemic is boiling down to a race between the virus's spread and governments' ability to administer an ever-growing line-up of vaccines.

While cases are dropping in some countries, Greece on Wednesday extended its lockdown to March 16 and called on additional private health resources as it clocked its highest rate of daily infections this year.

"We are at the toughest part of this pandemic," Health Minister Vassilis Kikilias told reporters.

On the other side of the world, Brazil reported a second straight day of record Covid-19 deaths, bringing the total to more than 259,000.

"The situation in our hospitals is really critical. We have to employ all reserves to save lives," Health Minister Jan Blatny told reporters, as Germany, Poland and Switzerland have all offered hospital beds for Czech patients.

And in Japan, media reported that overseas fans are likely to be barred from watching Olympics events in person, after organisers said that public safety would be the "top priority" at the coronavirus-delayed Games this summer.

Organisers also said Wednesday that they will take a decision on the number of spectators allowed in venues in April, with Tokyo currently under a state of emergency that limits sporting event capacity to 5,000.

US starts to reopen

Fewer than 10 percent of over-18-year-olds in Texas have had two vaccine doses, but Republican state Governor Greg Abbott said the vaccine and better testing mean normal life can resume.

"For nearly half a year, most businesses have been open either 75 percent or 50 percent and during that time too many Texans have been sidelined from employment," he told a business forum Tuesday.

"This must end. It is now time to open Texas 100 percent," he said to cheers from his audience, as many Texans say mask-wearing is a matter of personal choice.

But the Democratic mayor of Houston described the decision as "disheartening."

Iowa and Montana eased restrictions last month, and in Massachusetts, restaurants now have no capacity limit.

San Francisco is taking steps towards a post-pandemic life by allowing indoor eating and museums to open with limited capacity.

And New York state announced Wednesday that some theaters could open at 33 percent capacity -- with mask-wearing and social distancing -- from April 2.