In 2020, China’s Chang'e 5 mission sampled more than a kilogram of Moon rock and soil and brought it back to Earth. The samples contain countless tiny beads of glass, created when asteroids hit the Moon and splashed out droplets of molten rock around the impact site.

We have analysed these glass beads and the impact craters near where they were found in great detail. Our results, published in Science Advances, reveal new details about the history of asteroids hitting the Moon over the past 2 billion years.

In particular, we found traces of several waves of impacts occurring at the same times as impacts on Earth – including the Chicxulub impact 66 million years ago that led to the extinction of the dinosaurs.

Billions of years of space rocks

The destructive power of meteorite impacts has been seen throughout human history. Recently notable event from 2013, the spectacular Chelyabinsk meteor that injured hundreds of people, was a relatively minor occurrence compared to historical impacts.

Impacts of various scales have happened throughout Earth’s long geological history. Only about 200 impact craters have been found around the world, because erosion and geological activity are constantly modifying our planet’s surface and erasing evidence of past impacts.

On the Moon, where impact craters don’t go away, several hundred million are recognisable. It is not difficult to imagine Earth experienced a similar staggering barrage of projectiles early in its life.

As the Solar System evolved over the last 4.5 billions of years, the number of asteroids declined exponentially over time as space rocks were swept up by Earth and the other planets.

However, the details of this process remain murky. Was there a smooth decay over time in the number of impacts on Earth, Moon and other planets in the Solar System? Are there periods when collisions became more frequent, against this general background of decline? Is there a possibility that collisions may suddenly increase in the future?

Lunar soil contains spherical droplets of solidified melt (glass) with sizes ranging from a few millimetres to less than a millimetre. These droplets are formed during high-speed impacts that melt the target rock. 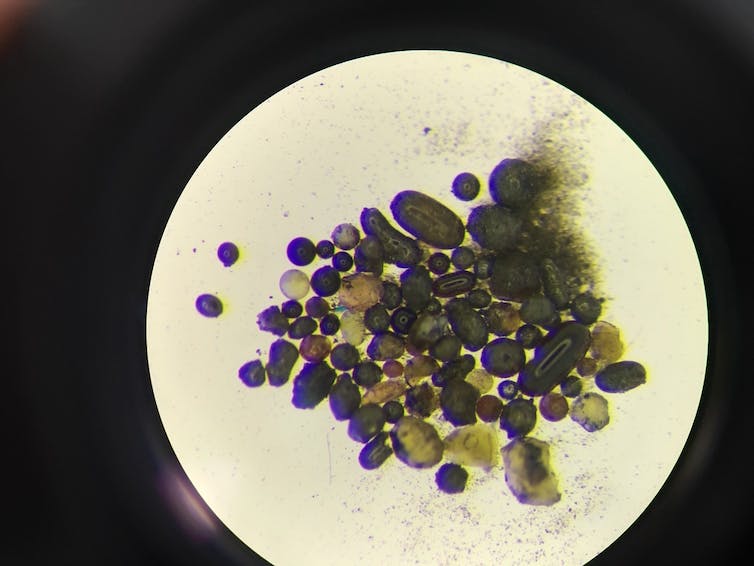 The melted droplets can splash out for tens or possibly hundreds of kilometres around the impact crater.

By analyzing the chemical makeup and radioactivity of these droplets, we can determine how old they are. The ages of the droplets then gives us an indication of when these impacts happened on the Moon.

Each lunar soil sample appears to record multiple impacts. The ages of the impacts are spread over the past ~4 billion years, with the youngest being only a few million years old.

Chang’e 5 landed at a site with a relatively simple geological history, compared to other sites on the Moon where samples have been collected.

The landing site is in the middle of a vast basaltic plateau nearly 400 kilometers across. The plateau is “only” 2 billion years old, which is young relative to the age of the lunar crust overall.

This means the history of the site is shorter and simpler to unravel. This made it easier to identify droplets originating from nearby impacts, as well as interpreting chemical and chronological data via satellite images of the surrounding lunar surface.

We combined this interpretation with modeling of how the droplets would have formed and splashed out in impacts of different sizes.

It appears that glass droplets can be transported for 20 to 100 kilometers from the site of impacts, even when the impact leaves a crater only 100 meters across. Models also indicate that impacts forming craters more than 1 kilometer across are more efficient in producing the droplets.

All this information combined helped to initiate the search for specific impact craters responsible for the production of glasses extracted from the sample.

The basaltic plateau surrounding Chang'e 5’s landing site contains more than 100,000 craters over 100 meters in size. Matching glass droplets with their crater of origin is a probability game, though the odds are a little better than winning the lottery.

We can say some of the craters are likely to be the source of some of the glass droplets in the sample. Nevertheless, this matching led to another important outcome.

Previous studies had found the distribution of ages of glass droplets in the individual soil samples is uneven. There are periods in the timeline with large numbers of droplets and periods with few to none.

Our analysis of glass in the Chang’e 5 samples and our attempts to link them to specific craters confirms a variation in impact rate through time.

One of these cluster ages also coincides with the dinosaur extinction. Our study did not examine this in detail, but this coincidence may indicate that, for reasons yet unknown, there are periods when regular orbits of small bodies in the solar system destabilize and head into orbits where they may hit the Earth or Moon.

Taken together, these ages suggest there may have been periods of time over Earth’s history when collisions increased throughout the inner Solar System. This means Earth could have also experienced periods when rate of impacts was higher than usual – and that similar increases are possible in the future.

How would such an increase affect the evolution of life on the planet? That remains a mystery.