Greek communists hold protest on Acropolis against US bases 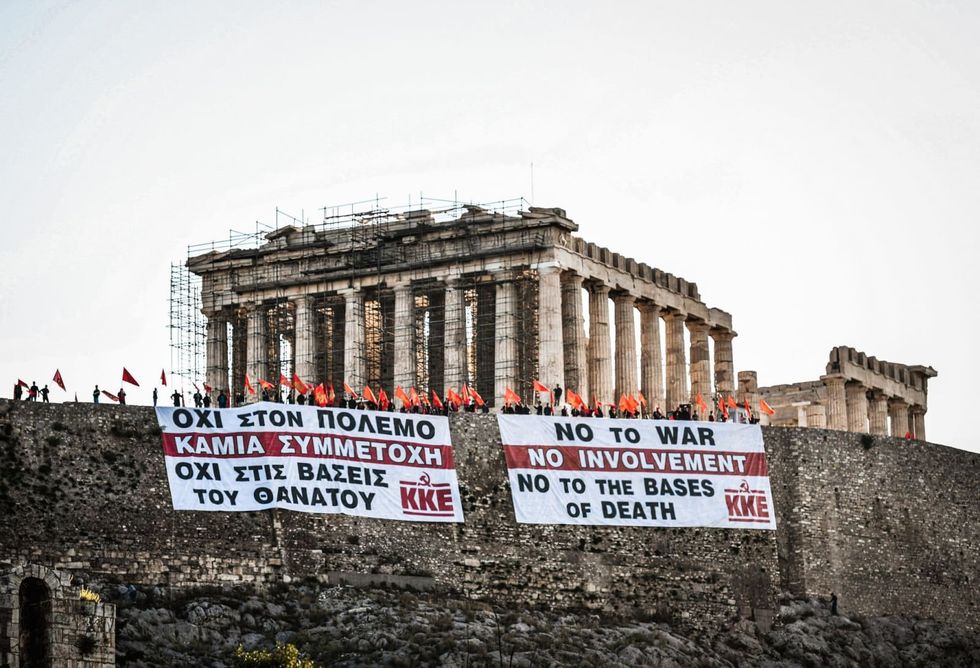 Members of the Communist Party of Greece (KKE) hang banners on the Acropolis hill that read in Greek and English: "No war, no involvement, no bases of death" in protest against Greece's indirect involvement, within the framework of NATO, in Ukraine's defensive struggle against the Russian invasion. Eurokinissi/Eurokinissi via ZUMA Press Wire/dpa

Activists from the Communist Party of Greece (KKE) unfurled two large banners on the Acropolis in Athens on Thursday in protest at Greece's indirect participation in the war in Ukraine through its membership of NATO.

The banners in both Greek and English read: "No to War - No Involvement - No to the Bases of Death" in large letters visible from a considerable distance.

The protest came ahead of a vote in parliament on Thursday evening on extending for a further five years an agreement on military cooperation with the United States. At the end of the period, the agreement is set to become permanent, if neither party withdraws.

Ratification is seen as a formality, as Greece's conservative government has the necessary majority. The government sees the agreement as enhancing stability and Greece's role in the Eastern Mediterranean.

The US already has a large naval and air base at Souda on Crete, from where its planes can cover the Eastern Mediterranean and the Black Sea. The US also operates two military bases in central Greece and a naval base in the port of Alexandroupolis in the north-east of the country.

The KKE, which holds 15 seats in the 300-seat parliament, has for decades demanded that Greece should withdraw from both NATO and the European Union.