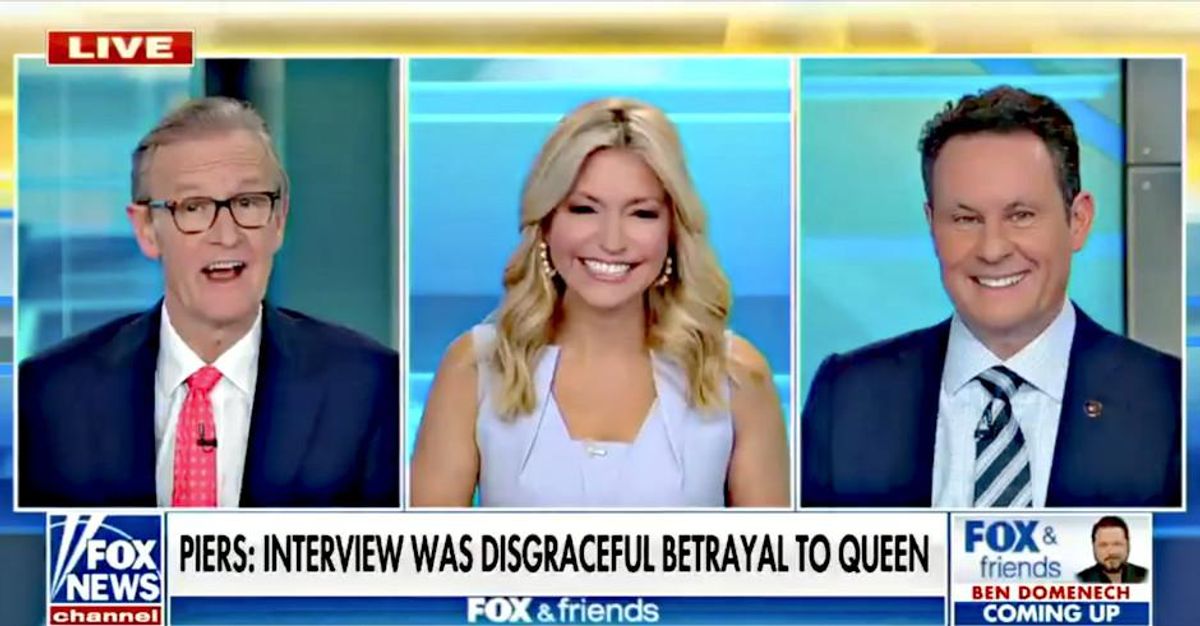 But it was co-host Ainsley Earhardt who managed to boil everything down to money.

"I'll just say if I got a castle, and I got the jewels and a crown, I wouldn't be leaving! I would not leave!"

Ainsley Earhardt, who says she watched the Meghan & Harry interview, says "if I got a castle, and I got the jewels and a crown, I wouldn't be leaving! I would not leave!" pic.twitter.com/sCtChhx7xi
— Bobby Lewis (@revrrlewis) March 8, 2021

On social media many were furious at the "tone deaf" attitude and "white privilege" the co-hosts displayed.

TFW you completely miss the point in a conversation and accidentally reveal how empty and shallow your life is.
— KathleenFrances 🇮🇪🇺🇸 (@Kathlee71013772) March 8, 2021

Why privilege is not understanding what it means to be on the receiving end of racism. So, all you can think of is money and a fucking castle. https://t.co/PeIfL2YaeE
— #BHM (@ify_o_ma) March 8, 2021

It's actually same group of people. The same that belong to a certain party in America, downplay racism too, they're the ones that have taken this side. No surprises at all. https://t.co/FoJHW5NvWe
— Sody (@SodyHalliday) March 8, 2021

The reality is that you are not allowed to leave. To see your friends . To do what you want. You live for appearances only. A lonely life of servitude in an empty castle. Earnhardt is a typical conservative who thinks all joy and happiness is to be found in having things.
— M.J. Norgaard (@RepublicOfMark) March 8, 2021

“I have my ideas about certain ways of life from children's movies and In Touch magazine, and nothing as trivial as actual testimony from someone who has lived that life is gonna change my mind!"
— waspuppet (@waspuppet) March 8, 2021

How many ways can fox be racist? They succeed every day to show just how racist they are!!!
— Julie Lininger (@JulieLininger) March 8, 2021

Proof white people don't know what racism is. Now stop telling us what it is.
— Damen Clegg (@YoungAmbition76) March 8, 2021