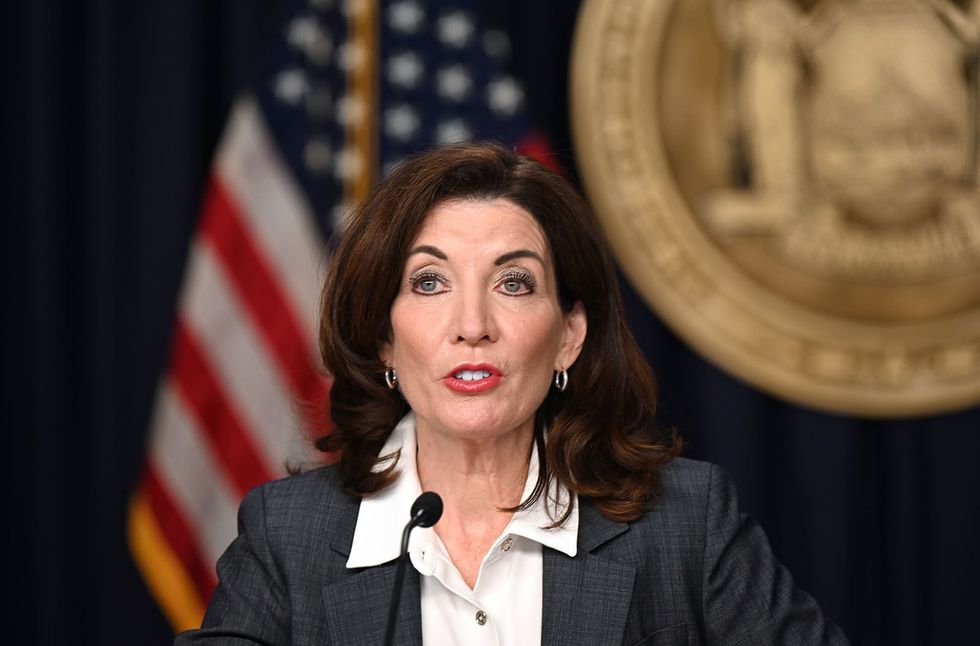 Kathy Hochul updates residents on the COVID-19 spread in the state, particularly on the omicron variant, during a press briefing Monday, Dec. 20, 2021, in New York City. - Kevin P. Coughlin/Office of the Governor/TNS

NEW YORK — Front-line employees in New York can return to work just five days after testing positive for COVID-19 as long as they are fully vaccinated and asymptomatic under new guidance announced Friday by Gov. Kathy Hochul. The guidance, which was unveiled as New York set another record for the daily number of coronavirus infections, applies to members of the state’s “critical workforce,” like nurses, doctors, grocery store clerks, hospitality employees and public transit workers, Hochul said. “You know who you are. You know you’re the ones that got us through the first many months of anxiet...

On Tuesday afternoon, far-right news outlet Real America's Voice dedicated a nearly 20-minute segment of its talk show "Water Cooler" to a novel explanation of Monday night's FBI raid on Mar-a-Lago, Donald Trump's Palm Beach resort and home. While many Trump allies in the Republican Party and conservative media have competed to voice the most vehement denunciation of the search — Rep. Paul Gosar of Arizona called to "destroy" the "democrat brown shirts known as the FBI," Rep. Marjorie Taylor Greene of Georgia suggested that the raid might portend "civil war" and Florida state Rep. Anthony Sabatini said state leaders should arrest FBI agents "upon sight" — RAV managed to find a bigger villain yet.

"I'll just tee it up this way: Jeffrey Epstein. Pedophiles. Trump. Deep State," said host David Brody, co-author of a biography of Trump, before handing the reins over to his colleague Anna Perez, a former Newsmax employee who now hosts her own RAV show, "Common Sense." Perez went on to make a lengthy case that the raid was tied to the claims of the repeatedly debunked conspiracy theory QAnon, which argues, against all evidence, that Democratic politicians, Hollywood celebrities and other elites are part of a satanic and cannibalistic child sex abuse ring that only Trump can defeat.

A pattern emerged in the hours after the FBI lawfully searched the Florida home of the former president. Indeed, it was deeply familiar.

"We absolutely cannot trust him to have the best interests of the health of the people of Pennsylvanians and for our country."