The Conversation
By Giovanni Giovannetti/Grazia Neri - <a rel="nofollow" class="external free" href="https://www.flickr.com/photos/synaes/5110600085">https://www.flickr.com/photos/synaes/5110600085</a>, Public Domain, Link
In 2017, one of Sylvia Plath’s private letters, which had previously not been made public, included a startling revelation: Plath suggested that her husband, poet Ted Hughes, was responsible for the miscarriage of their child in February 1961.

Heather Clark’s recent biography of Plath, “Red Comet: The Short Life and Blazing Art of Sylvia Plath,” includes this new information. But no scholarship has yet to contextualize the painful event as a means to reinterpret two of Plath’s most autobiographical poems, “The Rabbit Catcher” and “Thalidomide.”

As a scholar of 20th-century American poetry, I teach Plath regularly in my university classrooms and direct graduate theses about her works. To me, this new biographical information, together with Plath’s drafts and journal entries, reveals how she channeled this painful experience into her poetry.

Details of a miscarriage emerge

From Feb. 18, 1960, to Feb. 4, 1963, Sylvia Plath wrote a series of 14 intensely personal letters to psychologist Ruth Beuscher. In the letters – which span the most volatile era of Plath’s marriage, writing and eventual suicide – Plath opens up about topics she didn’t discuss with anyone else.

Scholars learned about these letters only in 2017 when they suddenly came up for auction, and a subsequent lawsuit eventually awarded them to Smith College, Plath’s alma mater.

As Plath’s marriage dissolved – she and Hughes separated in September 1962 – she had no reason to protect Hughes any longer. On September 22, 1962, she wrote to Beuscher: “Ted beat me up physically a couple of days before my miscarriage.” 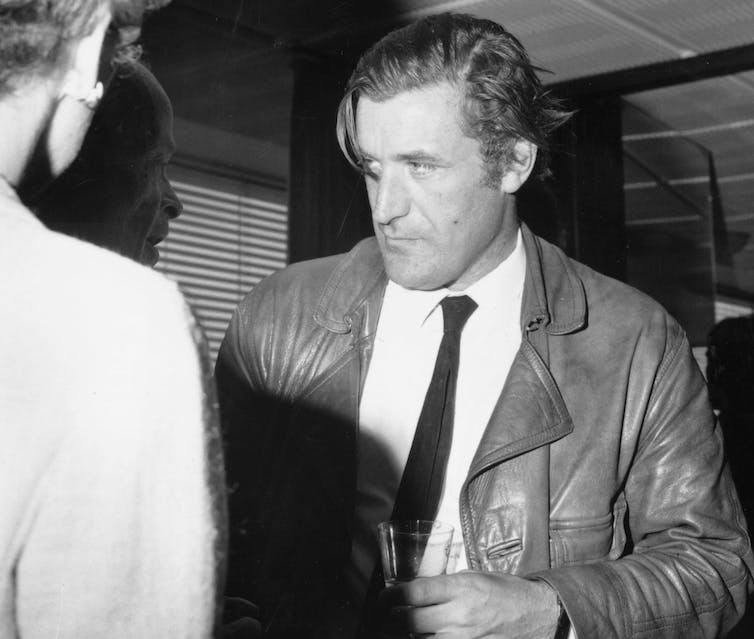 Ted Hughes and Sylvia Plath had a turbulent relationship.

As Clark explains in “Red Comet,” one day in early February 1961, Plath, who was four months pregnant, answered the phone at her home in Devon, England. It was the influential BBC personality Moira Doolan on the other line, and Doolan seemed startled to hear anyone but Ted answering.

To Plath, this response was evidence of an affair. She began tearing her husband’s writings into long strips. She broke a mahogany table that was an heirloom of Ted’s. Plath was furious that he could have been having an affair while simultaneously being, as she wrote, so “impervious” to the “innumerable little umbilical cords” that tied her to her unborn child and 10-month-old girl.

When Hughes found Plath in this rage, he began striking her repeatedly. Her unborn child, about four months along, died within days. Clark asserts the miscarriage likely took place on Monday, Feb. 6, 1961.

The two soon conceived again and their child, Nick, was born on Jan. 17, 1962. Plath died by suicide on Feb. 11, 1963, after having written the most important poems of her life during the six months before her death.

Most of these poems were eventually included in the collection “Ariel,” which was published posthumously in 1965. But only in 2004 did two of them – “Thalidomide” and “The Rabbit Catcher” – appear in an updated version. The former, known for its surrealistic imagery, was open to multiple interpretations. The latter was received as a poem that directly addressed Ted’s infidelity.

While Plath addressed the topic of miscarriage in her radio play “Three Women” and the poems “Elm” and “Parliament Hill Fields,” the poems in “Ariel” seem to substantively build off her own personal experience with losing an unborn child.

A poem imbued with new meaning

The once elusive “Thalidomide,” which was written after Nick was born, can now be read within the context of the emotional roller coaster of her miscarriage up through the birth of a healthy son.

Plath begins “Thalidomide” with the image of “O half moon.” In Plath’s handwritten drafts, which are available at Smith College, you can see that this image is the poem’s original title.

This moon is an omen for miscarriage. Letters Plath exchanged with poet Ruth Fainlight reveal that Plath regarded this symbol directly animated by Fainlight’s poem “Sapphic Moon,” which is also about a miscarriage.

“Thalidomide” then graphically evokes the imagery of a lynching. Something has been dismembered to resemble a dark victim burned until its limbs are short and its face is “masked like a white.” The most profound analog is the Billie Holiday song “Strange Fruit,” and Plath alludes to the song when she writes, “The dark fruits revolve and fall.”

What about the poem’s title? There is no evidence Plath ever took thalidomide, a drug developed in 1954 prescribed to treat several symptoms including nausea and anxiety in pregnant women. However, she likely would have read about the horrors of its side effects if taken during pregnancy, which surfaced in 1962 when researchers and doctors discovered that over 10,000 children were born with missing or badly misshapen limbs to women prescribed the drug.

In the poem, Plath connects her experience with the fears of a pregnant woman taking thalidomide. She describes “indelible buds” and “knuckles at the shoulder-blades” arriving with only a “Half-brain.” Plath herself was four months through the nine-month term when she had her miscarriage.

Plath’s drafts also offer a window into her inspiration and creative process. Before removing such direct references to her miscarriage, she originally describes it as “that abortion” and “big abortion.” It is a “sin that cries,” complete with imagery that describes a fetus “thin as an eyelid” with “the smell of perilous slumber.”

Just 11 months after her miscarriage, Nick would be born.

In one of her most haunting journal entries, she describes his birth: “I shut my eyes, so I would see and feel from the inside – a horror of seeing the baby before Ted told me it was normal.”

At the end of “Thalidomide,” Plath writes, “The glass cracks across, / The image / Flees and aborts like dropped mercury.” The imagery evokes a lightbulb that shatters, releasing mercury gas trapped within.

And just like that, the birth of a child replaces the toxic memory of a miscarriage.

Two weeks before Plath started writing “Thalidomide,” on Oct. 14, 1962, the British newspaper The Observer published an article about how the drug was being tested on pregnant rabbits to show how it caused deformities.

“The Rabbit Catcher” – which was originally titled “Snares” – immediately precedes “Thalidomide” in Plath’s version of “Ariel.”

For the knowing reader, the old-fashioned saying that hovers silently behind this poem is the phrase “the rabbit died,” which comes from the fact that pregnancy tests from the 1920s involved injecting a woman’s urine into rabbits. Many people mistakenly believed that an injection that killed the rabbit signaled a positive test.

Among “birth pangs,” a “hollow” and “a vacancy,” “The Rabbit Catcher” includes objects that resemble umbilical cords. Plath writes of “snares,” “Zeroes, shutting on nothing,” and “wires.” The line “I felt a still busyness of intent” was once read as anxiety over Ted’s sexual advances to others; it now reads as if Plath were reliving the process of delivering a lost child too soon. And the final line of the poem – “The constriction killing me also” – points to Plath’s feeling as if she, too, is dying.

The phrases from Plath’s earlier drafts are illuminating: “I was a flat personage,” it was “a clean killing,” and it was all “Final, like a bad accident.”

Most potent of all, Plath writes in an earlier draft of what can be understood only as her portrayal of Ted’s reaction: “It might cause him a morning’s anger.” This line represents Ted as so emotionally shallow that the loss barely registers.

Is it any surprise that it was Ted Hughes who removed these two poems before “Ariel” was first published?

At the time, only he knew of the deep family trauma they probed. And only in the fully restored 2004 edition of “Ariel” did they appear as Plath intended.

'This is a guy flushing documents down the toilet': Impeachment lawyer explains why FBI needed Mar-a-Lago warrant

Trump impeachment lawyer Daniel Goldman on Tuesday said that the United States Department of Justice needed to execute a search warrant on Mar-a-Lago because it couldn't trust former President Donald Trump to willingly hand over classified documents in his possession.

During a CNN panel discussing the Mar-a-Lago search, Goldman said that Trump's history of mishandling official White House documents gave the FBI reason enough to bypass subpoenaing the documents and going straight for a search warrant.