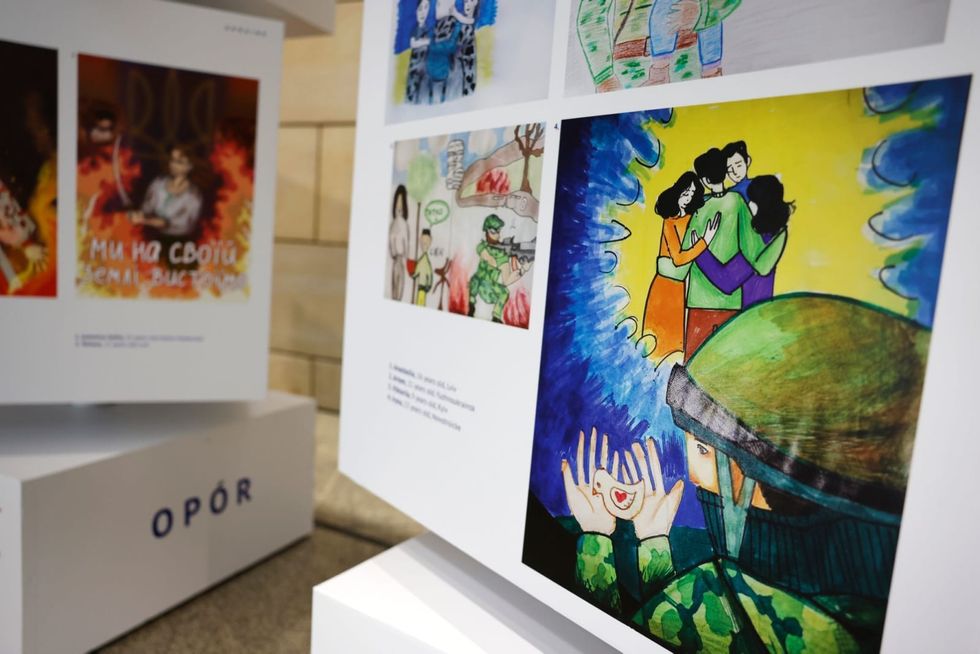 Rockets bombing skyscrapers, rolling tanks, soldiers shooting soldiers, children squatting with fearful faces in air-raid shelters and in front of destroyed houses: The scenes depicted in the drawings of the travelling exhibition now on display in a German state parliament are a lot to take in.

They were drawn by children living through Russia's invasion of Ukraine, which began more than half a year ago.

One is signed "I want peace."

The drawings are on display along with numerous historical paintings by Polish children from 1946 who portrayed their cruel experiences suffered and witnessed during World War Two and the German occupation. Their drawings show brutal mass shootings, robberies, deportations and concentration camps.

"The children are victims and witnesses of this terrible aggression and Russia's war crimes in Ukraine," Ukrainian Consul General Iryna Shum said in the Düsseldorf parliament on Thursday.

More than 380 Ukrainian children have been killed and more than 740 injured since the Russian attacks began, according to official figures. The exhibition is "a reminder to all of us that the world needs to do everything today to stop this aggression," Shum said.

The exhibit dubbed "Mama, I don't want war," which was initiated by Poland, displays some 7,000 historical paintings by Polish children and some 10,000 works by children from Ukraine.

Most of them were created during therapeutical art programmes.

"Then, as now, the aggressors robbed and robbed these innocent children of their childhood, their joy of life, their security and, unfortunately, their lives," said Polish Consul General Jakub Wawrzyniak.

The exhibit will be open to the public on Sunday, on occasion of World Children's Day next week. It will remain in the parliament building until September 30, after which it's scheduled to travel to Brussels and the United Nations in New York.