Is US finally ready to ditch Native American names in sports? 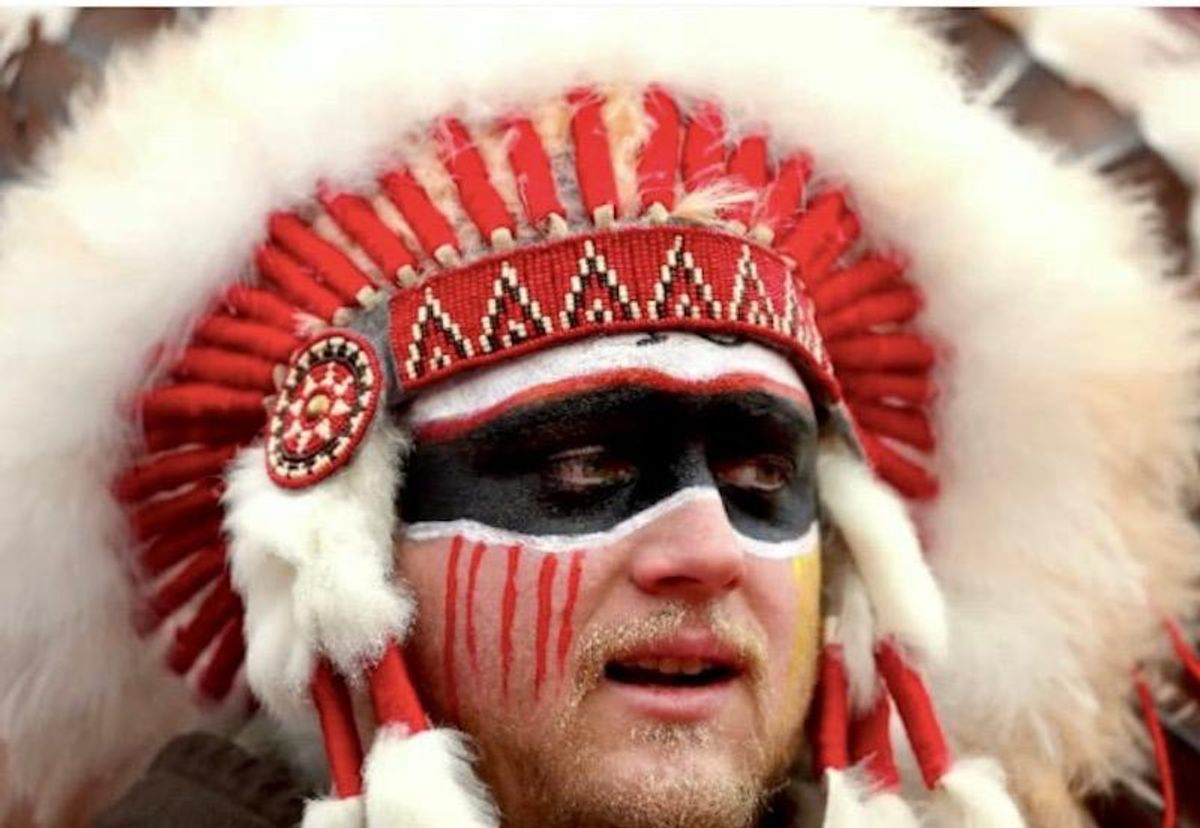 A fan of the National Football League's Kansas City Chiefs(AFP)

Washington no longer hails the Redskins, and Cleveland is saying farewell to the Indians, in an accelerating push to rid the US sports world of all Native American names.

But some teams -- like the Kansas City Chiefs, who will seek back-to-back Super Bowl titles on Sunday -- have held fast to their brand, with the support of their fans.

In August 2020, at the start of the new National Football League season, Kansas City banned fans in Chiefs Nation from wearing feather headdresses or any face paint deemed to be appropriating Native American culture.

But the team stopped short of considering a new name, as the Washington Football Team did following more than 80 years as the Redskins, with fans noting it stems from a former city mayor who was known as Chief.

That mayor, H Roe Bartle, who was white, himself liked to wear a headdress, so the issue is far from clear-cut.

Those who come to watch the Chiefs play are still embracing the tomahawk chop, which is used by fans of several US professional and college teams, but is seen as offensive by many Native Americans.

And Arrowhead Stadium still has a "Drum Deck," where fans hit a giant drum with the team logo to start each game.

"I don't think that they really did anything to advance social justice in any way, or make themselves less racist," Gaylene Crouser, the executive director of the Kansas City Indian Center, said of the hometown team.

"They're just less visibly racist," she said. "It's not a good look for Kansas City."

After decades of complaints about Native American names in sports, and a spring of racial reckoning across the United States spearheaded by the Black Lives Matter movement, 2020 saw a major shift.

It finally caught up with the Redskins, whose name had long been seen as pejorative. The Navajo Nation called it "racist and disparaging."

In the end, the team called time on its longtime logo and mascot when several major corporate sponsors including FedEx threatened to yank their support.

In December 2020, Cleveland's Major League Baseball team followed suit, saying it would retire the Indians name adopted in 1915 and take some time to find a new nickname.

The Chiefs, on the other hand, are not the only team to stay with a name that for many Native Americans is offensive. The Atlanta Braves (baseball) and the Chicago Blackhawks (ice hockey) are holding firm.

The Chicago NHL team -- named in honor of Black Hawk, a leader of the Sauk tribe -- has said it will pursue dialogue with the Native American community, and partners with the Trickster Cultural Center in Illinois.

While the team's logo is of Black Hawk's profile, it does not use a Native American mascot, but rather a black hawk bird.

Stephanie Fryberg, a researcher at the University of Michigan, said that Native American mascots can have harmful effects on indigenous teens, and especially on how they view their heritage.

The Chiefs did not respond to AFP's request for comment on the issue.

Tip of the iceberg

For Crouser, Kansas City will eventually face a moment of truth given the "heavy pushback from the hardcore fans" who want to maintain the team's somewhat problematic identity.

"People are going to tolerate it less and less," she predicted, saying public opinion outside the diehard fan base is shifting toward dumping the Chiefs name.

"It would look better for them if they proactively did it (made a change) and said... 'We're stopping it,' rather than trying to piecemeal it the way they are," Crouser added.

Of course, professional sports is only the tip of the iceberg.

According to sports team name database MascotDB, which looks at high schools, universities and pro leagues, more than 1,600 teams still have a mascot that depicts Native American culture in some way.

The cliched image of the proud indigenous warrior, ready to sacrifice at all costs for the tribe, has fueled American sports culture for more than a century, as evidenced by the Cleveland baseball team -- without any input from Native American communities.

Such cultural appropriation reflected the wider effort to assimilate Native Americans -- all while erasing key parts of their heritage.

In the Colorado town of La Veta, the school district's board of education last month rechristened its teams as the Redhawks, dumping the Redskins moniker.

Seven years ago, those who backed the change, like board president Eleanor Foley, were "attacked viciously," she recalled.

This time around, the district took advantage of a move to a new school building to change the team name and mascot imprinted on its fields and gym floors.

The debate is still "pretty contentious," Foley says, but "the consensus has changed," with a majority ready for a shift.

The lockdowns that almost every state went into in order to combat the spread of COVID-19 in the spring of 2020 interrupted nearly every aspect of Americans' lives. Businesses were shuttered, schools closed and social groups stopped meeting as scientists rushed to understand the pathways through which the virus spread.

One of the most controversial parts of the lockdown strategy in the United States was the closure of churches across the country.

U.S. Rep. Marjorie Taylor Greene (R-GA), who may face an ethics inquiry after accosting New York Democratic Rep. Alexandria Ocasio-Cortez, is now attacking her nemesis through the media, telling AOC through reporters, "you need to debate me" and "defend socialism to the American people."

Congresswoman Greene told The Washington Post's Jacqueline Alemany that Rep. Ocasio-Cortez "can't call me a bully because I'm trying to talk with her about policy that will change our economy... What she is a coward and a fraud and a fake."

'We are the Met': Labor tensions flare at prestigious New York opera