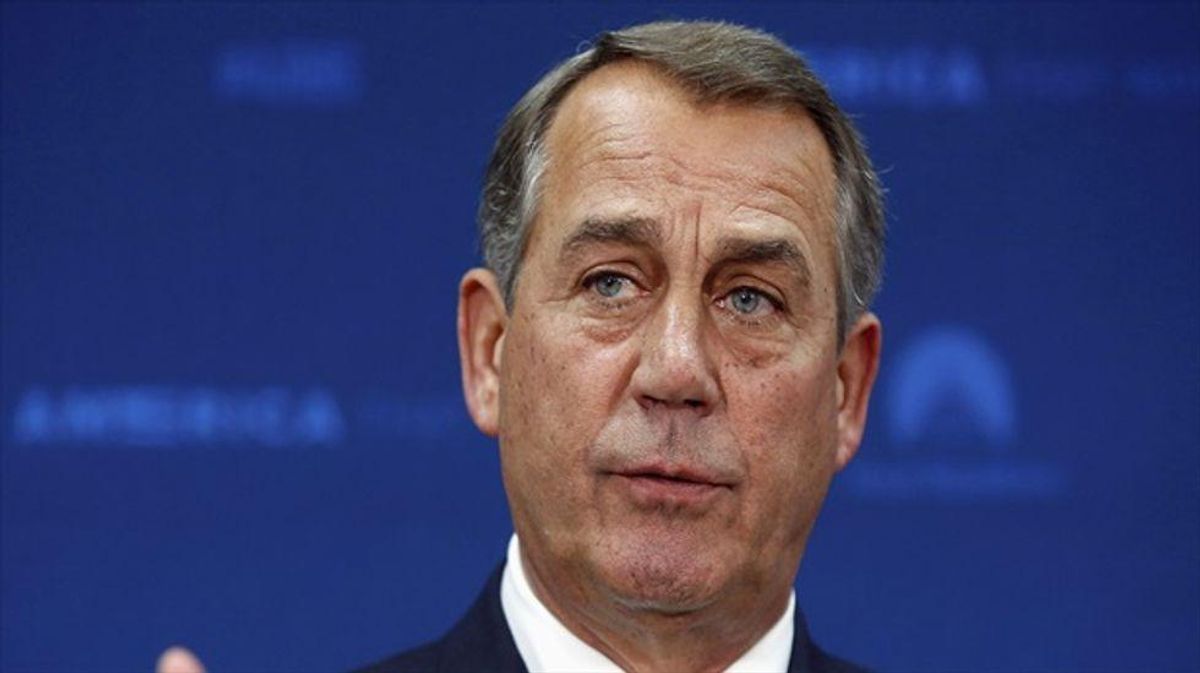 Former House Speaker John Boehner, R-Ohio, detailed how Fox News ushered in the rise of the Republican "crazy caucus" during the Obama era in his upcoming book "On the House," paving the way for the rise of Donald Trump and fringe figures like Rep. Marjorie Taylor Greene, R-Ga.

Boehner blamed Fox News and conservative "propaganda" outlets for incentivizing the worst behavior by lawmakers after the 2010 Republican wave swept him into power. Rather than advance a conservative agenda or pass any actual legislation, the GOP House takeover resulted in years of conspiratorial attacks that cast him as a so-called "liberal collaborator," even though he "hated Barack Obama" and repeatedly blocked his agenda. Boehner ultimately resigned in October 2015 amid Republican criticism that he was not doing enough to oppose Obama.

The shift, he argued, occurred after the 2010 midterms, which saw the election of 87 new Republican members of Congress in what Obama himself described as a "shellacking."

"You could be a total moron and get elected just by having an 'R' next to your name — and that year, by the way, we did pick up a fair number in that category," he wrote in an essay adapted from his book and published by Politico Magazine.

Boehner tried to "explain how to actually get things done" to new members, but a "lot of that went straight through the ears of most of them, especially the ones who didn't have brains that got in the way."

Instead, he wrote, the new members "wanted to blow up Washington" and "fundraise off of outrage" while making frequent appearances on Fox News. "They didn't really want legislative victories," he wrote. "They wanted wedge issues and conspiracies and crusades."

Boehner, in large part, blamed "right-wing propaganda outlets" like Fox News, Breitbart, conservative radio hosts, the Drudge Report and a growing number of YouTube conspiracy theorists accusing Obama of being a "communist," a "secret Muslim" and a "Manchurian candidate planning to betray America."

"He got swept into the conspiracies and the paranoia and became an almost unrecognizable figure," Boehner wrote of Ailes, recalling their decades of friendship and a 1996 dinner where Ailes and media mogul Rupert Murdoch told him about their early plans to launch the conservative network.

"I had no idea I was listening to the outline of something that would make my life a living hell down the line," Boehner wrote.

Murdoch did not seem to believe the "kooky conspiracy theories that started to take over his network," but he "didn't have a problem with them if they helped ratings," Boehner recalled.

Ailes, however, went deep down the rabbit hole following Obama's election, pushing "bullsh*t" conspiracy theories about the Benghazi attack and "elaborate plots by which George Soros and the Clintons and Obama (and whoever else came to mind) were trying to destroy him."

Boehner recalled a conversation in which Ailes claimed the Obama White House was "monitoring" him and revealed that he had built a "safe room" so he could not be spied on.

"There was a lot of conspiratorial talk. It was like he'd been reading whacked-out spy novels all weekend," Boehner wrote. "And it was clear that he believed all of this crazy stuff. I walked out of that meeting in a daze. I just didn't believe the entire federal government was so terrified of Roger Ailes that they'd break about a dozen laws to bring him down. I thought I could get him to control the crazies, and instead I found myself talking to the president of the club."

The conspiratorial bent of the network transformed the image of Boehner, a hardline conservative, into an Obama sympathizer as hosts like Hannity repeatedly attacked him and other GOP leaders, even though "we were actually trying to stand up to Obama."

"Sean Hannity was the worst," Boehner wrote, adding that he became so incensed at the criticism that he called up the host and "called him a nut."

Hannity took issue with the excerpt, criticizing Boehner as the "worst speaker in the history of the Republican Party."

"Absolutely useless, no vision, no leadership skills, he accomplished nothing of significance, and was pathetically paralyzed with fear and was rolled by Nancy Pelosi and liberal Democrats almost daily," Hannity told FoxNews.com.

Boehner went on to write that the conservative "propaganda" machine quickly transformed the GOP and gave way to a new breed of Republican like former Rep. Michele Bachmann, R-Minn., who "made a name for herself as a lunatic" before her ill-fated 2012 presidential run.

The former speaker recalled how Bachmann approached him during a busy period in late 2010 to press for a spot on the powerful Ways and Means Committee.

"There were many members in line ahead of her for a post like this. People who had waited patiently for their turn and who also, by the way, weren't wild-eyed crazies," he wrote. "There was no way she was going to get on Ways and Means, the most prestigious committee in Congress."

Boehner tried to dismiss her request "diplomatically," but as she kept talking, he realized that it wasn't a request but rather a "demand," he wrote.

"Well, then I'll just have to go talk to Sean Hannity and everybody at Fox, and Rush Limbaugh, and Mark Levin, and everybody else on the radio and tell them that this is how John Boehner is treating the people who made it possible for the Republicans to take back the House," Bachmann responded matter-of-factly, according to Boehner.

"I wasn't the one with the power, she was saying. I just thought I was. She had the power now," Boehner wrote. "She was right, of course."

Boehner ultimately caved and offered a compromise by putting Bachmann on the House Intelligence Committee against the wishes of then-Chairman Mike Rogers, R-Mich., an Army veteran who lit into the speaker over the move.

Boehner said he tried to focus on governing after taking over as speaker, and he dismissed fringe allegations that Obama was not born in the U.S., which were pushed on outlets like Fox News by fringe figures like Trump. That's when he realized exactly how far the party had gone over the edge.

"It was a simple statement of fact. But you would have thought I'd called Ronald Reagan a communist," he recalled. "I got all kinds of sh*t for it — emails, letters, phone calls. It went on for a couple weeks. I knew we would hear from some of the crazies, but I was surprised at just how many there really were."

Boehner wrote that this pushback undercut his plans to try to cut deals with the Obama administration, while also arguing that Obama did not make much of an effort to reach out to the GOP. But, he added, "on the other hand — how do you find common cause with people who think you are a secret Kenyan Muslim traitor to America?"

Before he knew it, the party was taken over by hardliners like Sen. Ted Cruz, R-Texas, the top cheerleader for the 2013 government shutdown over his opposition to Obamacare, costing the U.S. economy $24 billion.

"Under the new rules of Crazytown, I may have been speaker, but I didn't hold all the power," he concluded. "By 2013, the chaos caucus in the House had built up their own power base thanks to fawning right-wing media and outrage-driven fundraising cash. And now they had a new head lunatic leading the way, who wasn't even a House member. There is nothing more dangerous than a reckless a**hole who thinks he is smarter than everyone else. Ladies and gentlemen, meet Sen. Ted Cruz. He enlisted the crazy caucus of the GOP in what was a truly dumba** idea. Not that anybody asked me."

The audio version of Boehner's book, which he recorded while sipping red wine with a cigarette in hand, features a number of unscripted asides that the former speaker let fly, including one aimed directly at Cruz, whom he previously described as "Lucifer in the flesh."

While recording the audiobook, Boehner could not resist getting another shot in at his longtime nemesis: "Oh, and Ted Cruz, go f*ck yourself."