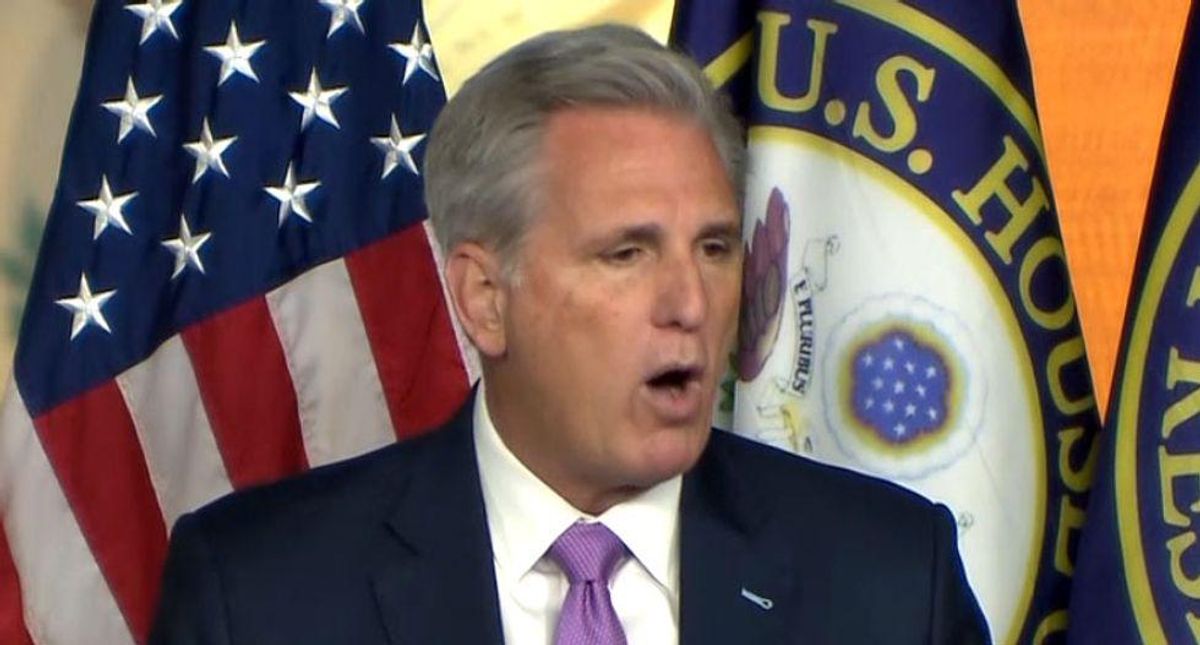 House Minority Leader Kevin McCarthy (R-CA) was blasted after announcing he won't support the creation of a bipartisan commission to investigate the Jan. 6 insurrection.

The California Republican complained that the proposed commission was too "shortsighted" and would not examine all forms of political violence, and would instead focus on Donald Trump's supporters who violently stormed the Capitol in an effort to overturn Joe Biden's election win.

"Given the political misdirections that have marred this process, given the now duplicative and potentially counterproductive nature of this effort, and given the speaker's shortsighted scope that does not examine interrelated forms of political violence in America," McCarthy said in a statement, "I cannot support this legislation."

He complains that a congressional commission into the Capitol insurrection would be "duplicative" but @GOPLeader ha… https://t.co/y6JGAbqfzR
— Kevin M. Kruse (@Kevin M. Kruse) 1621342423.0

You'll be shocked to learn that Kevin McCarthy -- who has clearly been coordinating his January 6th story with Trum… https://t.co/plskypXnsQ
— LOL🇺🇸GOP (@LOL🇺🇸GOP) 1621342690.0

The "shortsighted scope" thing always makes me laugh. It's like if Democrats demanded that the Benghazi Committee b… https://t.co/vpK9nX91FK
— Dave Weigel (@Dave Weigel) 1621342485.0

Two things worth noting: - McCarthy could be called as a witness before any panel - It's now effectively policy for… https://t.co/4ddpDEEtQI
— Grace Segers (@Grace Segers) 1621342516.0

Kevin McCarthy is a traitor to our Constitution and our Democracy. https://t.co/4v4bZfrtQN
— David Weissman (@David Weissman) 1621343277.0