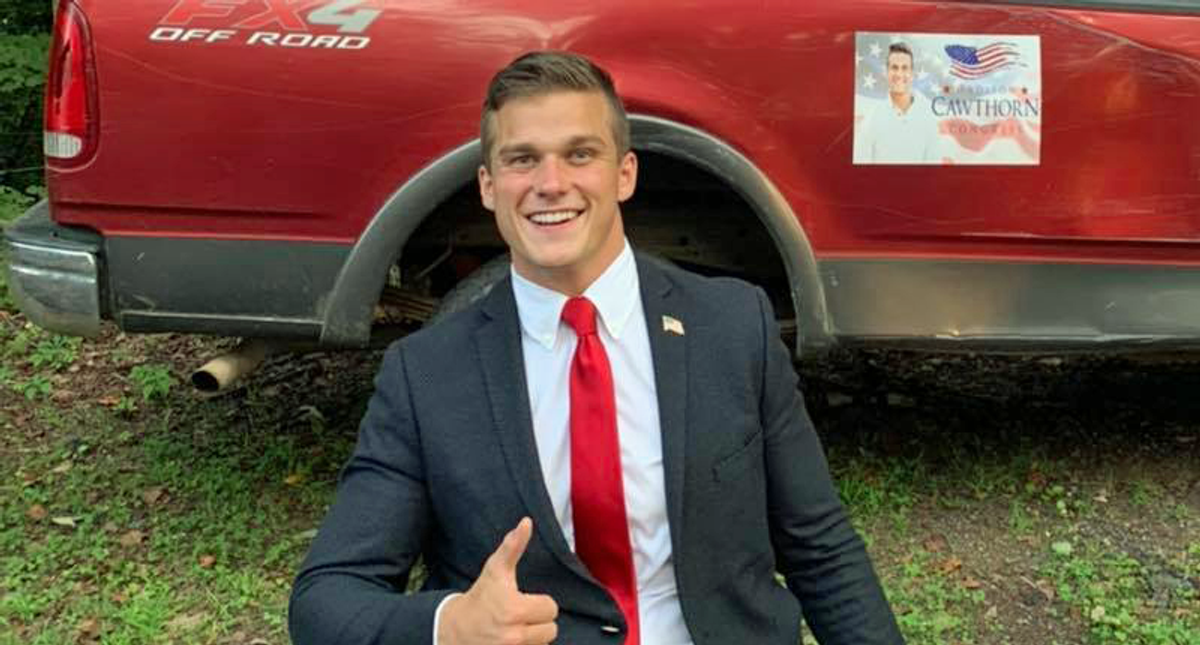 Rep. Madison Cawthorn of North Carolina has been hailed in right-wing media as a fresh young face in the Republican Party. Like so many fellow Republicans, the 25-year-old congressman has had an intense devotion to former President Donald Trump — and according to Washington Post reporter Michael Kranish, one of Cawthorn's most Trump-like qualities is his willingness to lie.

Cawthorn, who is the youngest member of Congress and was elected to the U.S. House of Representatives via North Carolina's 11th Congressional District in 2020, was among the speakers at the "Save America Rally" in Washington, D.C. on January 6 — when he promoted the debunked conspiracy theory that then-President Donald Trump was robbed of a second term because of widespread voter fraud. And Cawthorn, according to Kranish, has been dishonest about the 2014 car crash that left him disabled.

Kranish notes that when Cawthorn spoke at Patrick Henry College in 2017, he discussed the crash and claimed that he was left to die "in a fiery tomb" and was "declared dead" after the accident. But an accident report obtained by the Post, according to Kranish, said that Cawthorn was "incapacitated" — not declared dead. And Bradley Ledford, a friend who was with him, told the Washington Post that he pulled Cawthorn from the wreckage after the accident.

"The story of Cawthorn's rise is, by any measure, an extraordinary accomplishment at a young age by a man who suffered a horrific injury," Kranish explains. "But an examination by the Post of how he ascended so quickly shows how even one of the most neophyte elected Republicans is adopting the Trump playbook, making false statements about his background, issuing baseless allegations about voter fraud and demonizing his political opponents."

Kranish also reports that Cawthorn has been accused of sexual harassment by some women who knew him when was a student at Patrick Henry College, a Christian college in Purcellville, Virginia.

"Three women told the Post in on-the-record interviews that they objected to Cawthorn's behavior, with one saying he tried forcibly to kiss her after she rejected his advance," Kranish reports.

Cawthorn was among the speakers at the recent 2021 Conservative Political Action Conference, where he made inflammatory comments and described his critics as people who are "trying to take away all of our rights" and are "trying to turn this country into a communist ash heap."

Cawthorn decided to run for Congress after Rep. Mark Meadows, a Tea Party favorite, decided to resign from Congress to join the Trump Administration as White House chief of staff. In the GOP primary in his district, Cawthorn slammed fellow Republican Lynda Bennett as a Never Trumper — and it worked. Cawthorn won the nomination and went on to defeat Democratic nominee Moe Davis in the general election. When he was sworn in on January 3, Cawthorn became the youngest member of Congress.